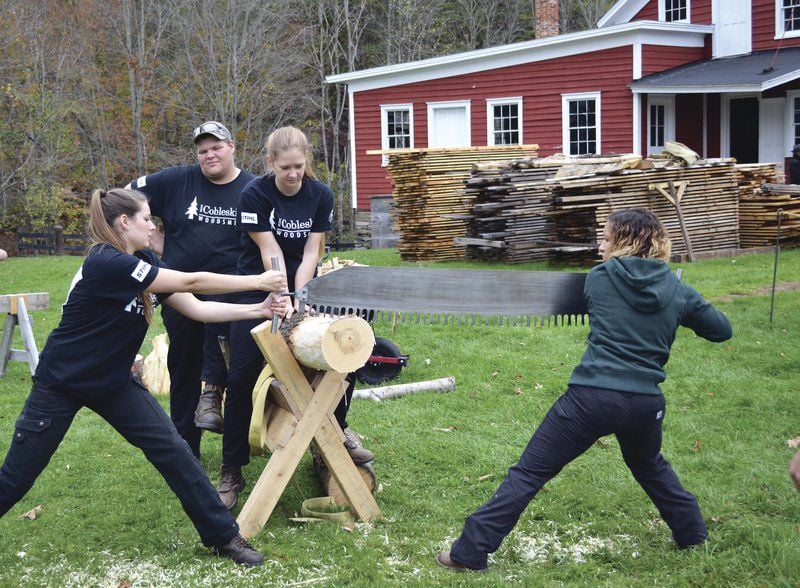 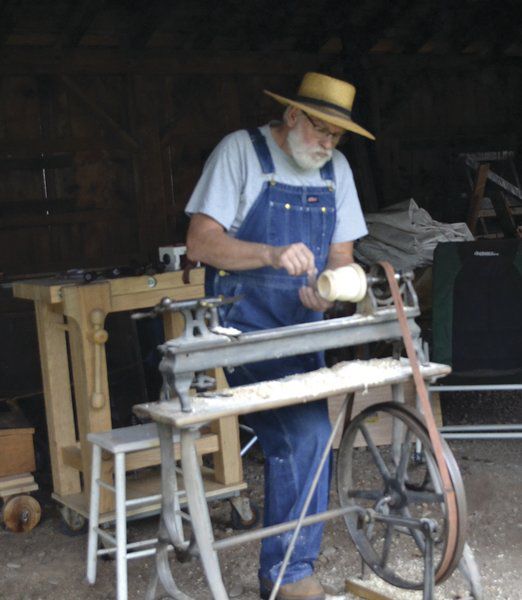 Don Vanhart of Maine, known as the “Wood Smith,” is seen working his 1870s treadle lathe at the Woodsmen’s Festival held Saturday at Hanford Mills Museum. 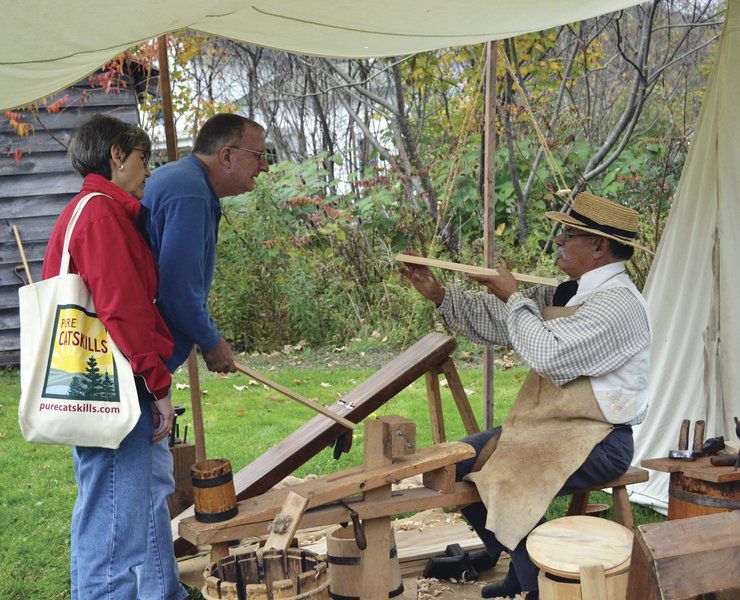 Don Vanhart of Maine, known as the “Wood Smith,” is seen working his 1870s treadle lathe at the Woodsmen’s Festival held Saturday at Hanford Mills Museum.

Crowds of crafters, lumberjacks and history lovers came out for Hanford Mills Museum’s annual Woodmen’s Festival, held Saturday on the museum grounds in East Meredith. The event, described in Hanford Mills literature as “a perennial fall favorite,” was also the museum’s last of the 2016-17 season.

Kajsa Harley, education and curatorial initiatives manager with the museum, said planning for the festival began a few months in advance, with attention paid to the availability of the State College of Agriculture and Technology at Cobleskill Woodsmen’s Club.

“We try to make sure it’s a weekend they’re available because they’re a pretty big part (of the festival),” Harley said. She said club members demonstrate contemporary woodsman skills alongside historical methods that reinforce the museum’s mission. “The woodsmen team is definitely a big draw,” she said.

The event, Harley said, typically brings about 400 visitors. She said the autumn weather, paired with the museum’s impending closure for the season, make for strong community support.

“It’s been a great day and so fun,” she said. “We’ve had a lot of people coming in since we opened. It’s a nice occasion together in the fall before things get cold and it’s our last event of the season, so that brings a lot of people out.”

Russ Holmes, an advisor to the SUNY Cobleskill Woodsmen’s Club, said the event offered an opportunity for some of the club’s newest, unseasoned members to experience the fun of crowd demonstrations. Veteran members of the club, he said, were offsite, participating in regional lumberjack competitions for which the club is well-known. He estimated club membership at about 30, with member ages spanning 17 to 21.

“Everyone here today is a newcomer,” Holmes said. “We’re doing the basics of lumberjacking (and) it gives them a chance to get out around the crowd. They’re learning.” He noted that the club regularly counts higher female membership than male.

“It’s nice and it goes with the historical part of things,” he said of the group’s annual participation.

“(People) seem to really be enjoying it and we had a huge crowd,” Hand said. “And we like to talk to people about the history of it.”

Independent demonstrator Don Vanhart of Maine, in Broome County, known as the “Wood Smith,” was a returning exhibitor. While creating a trinket holder from ash on an 1870s treadle lathe, Vanhart said he was glad to come back. He said, “It’s been good; a nice day (with) nice people.”

Cooper and museum interpreter Bob Allers showcased the process of hand-making wooden barrels for what he called a “non-stop” crowd.

Allers, who has been a museum staffer for two years but a demonstrator at the festival for 15, said kids, especially, seemed to appreciate his craft.

“We had a big crowd of kids here,” he said. “They like watching somebody work with their hands (and) I do living history.”

For Lyla Meader of Schoharie, attending a Hanford Mills Museum event was a longtime goal. Thanks to New York History Project’s tweet of the event, she said, she was lucky to learn of the event just a day beforehand.

Meader, who said her woodworking skills have more to do with chopping firewood than handicrafts, said she appreciated the celebration of antiquated craftsmanship.

“It’s great and a lot of fun,” she said. “I appreciate handmade objects and the people that preserve lost skills. I like seeing that.”

To learn more about Hanford Mills Museum or scheduled events for the museum’s 2018 season, visit hanfordmills.org.