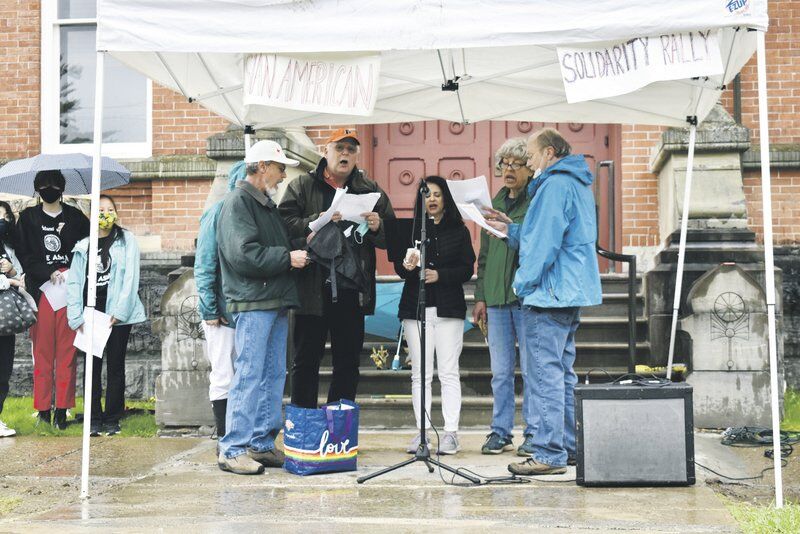 Sarah Eames | The Daily StarAn a capella group performs "America the Beautiful" on the north steps of the Otsego County Courthouse during the Otsego Solidarity Rally for Asian Americans on Sunday, May 2. 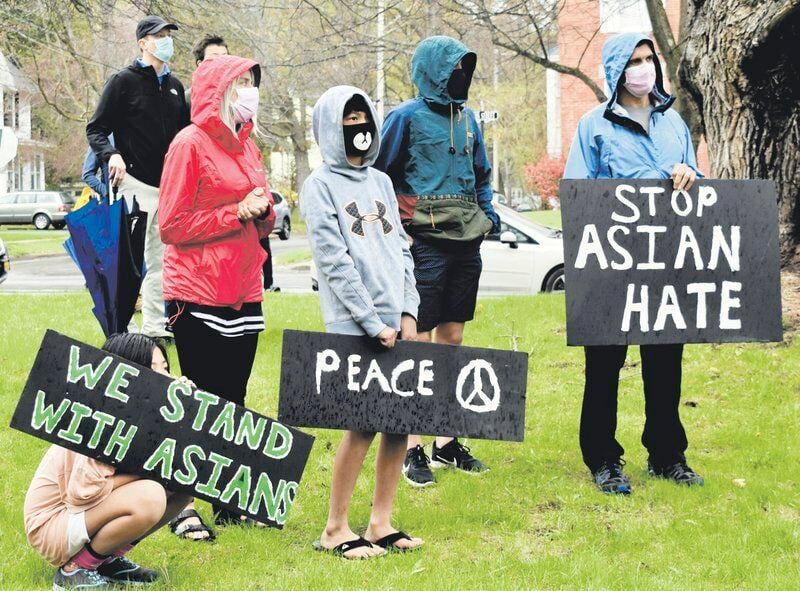 Sarah Eames | The Daily StarThe Agostino family of Cooperstown listens to speakers at the Otsego Solidarity Rally for Asian Americans on the lawn of the Otsego County Courthouse on Sunday, May 2. From left, Maya, 11; Karen; Hu, 11; Rico, 16; and Ben. 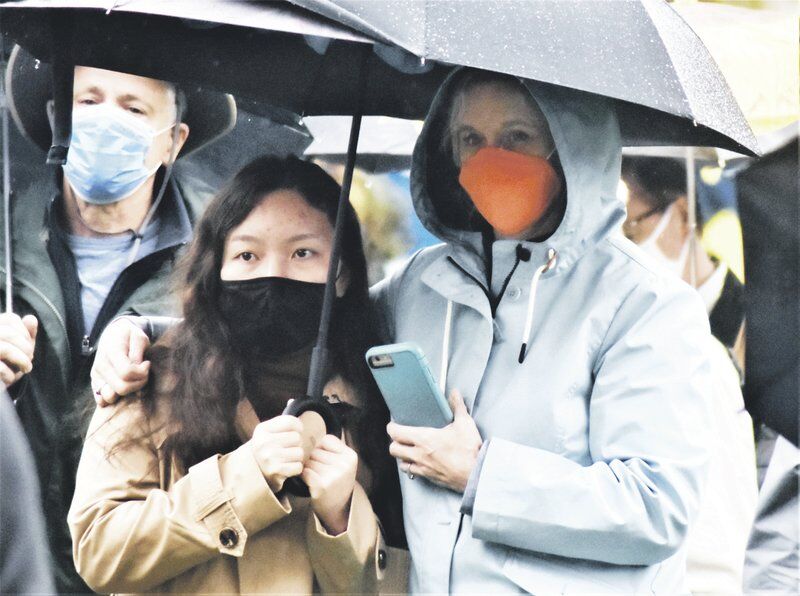 Sarah Eames | The Daily StarCooperstown resident Molly Hughes shares an umbrella with her mother, Elizabeth, while listening to speakers at the Otsego Solidarity Rally for Asian Americans outside the Otsego County Courthouse on Sunday, May 2.

Sarah Eames | The Daily StarAn a capella group performs "America the Beautiful" on the north steps of the Otsego County Courthouse during the Otsego Solidarity Rally for Asian Americans on Sunday, May 2.

Sarah Eames | The Daily StarThe Agostino family of Cooperstown listens to speakers at the Otsego Solidarity Rally for Asian Americans on the lawn of the Otsego County Courthouse on Sunday, May 2. From left, Maya, 11; Karen; Hu, 11; Rico, 16; and Ben.

Sarah Eames | The Daily StarCooperstown resident Molly Hughes shares an umbrella with her mother, Elizabeth, while listening to speakers at the Otsego Solidarity Rally for Asian Americans outside the Otsego County Courthouse on Sunday, May 2.

COOPERSTOWN — A crowd of nearly 300 local residents braved torrential downpours Sunday, May 2, to stand in solidarity with the Asian American and Pacific Islander community in a rally organized by a handful of teenagers.

“We are here to talk about the future — a future we hope will eradicate intolerance and prejudice against anyone who doesn’t fit the so-called norm,” said Riley Fillion, a Cooperstown 9th-grader. “We want a better future — a peaceful future — and the future starts with recognizing our errors of the past and making changes today.”

Fellow freshman Cate Bohler said she and six friends organized the rally in response to a recent string of violent attacks against Asian Americans and Asian immigrants; most notably, the series of mass shootings in Atlanta that left eight people dead, including six Asian women.

“We wanted to help get to the point where Cooperstown is ready to act,” she said.

Though she said she has never directly experienced any racism or anti-Asian sentiment, Cate said she and her classmates — Elizabeth Hughes, Charlotte Feury, Maya Pandit, Olivia Loewenguth, Jaina Bischof and Riley Fillion — took up the cause to help spread awareness of the hate and discrimination faced by Asians the world over.

“I realized that when I grow up, I’ll probably move away from Cooperstown,” Cate said. “I’ll be out in the world and I won’t be in this little bubble anymore. It’s not right for me to sit back and say this won’t affect me.”

Danny Lapin, who represents Oneonta’s Fifth and Sixth Wards on the Otsego County Board of Representatives, read a proclamation passed by the board in support of the rally, noting that its members “unequivocally and wholeheartedly” condemned violence and discrimination against Asian Americans and Pacific Islanders.

“Racism, intolerance and scapegoating have no place in Otsego County, and we as Otsego County residents will do everything we can to speak out against it at every turn,” said Lapin, who identified himself as “the lone Asian American legislator on the county board.”

“I was raised in a Japanese and Jewish household,” he continued. “My grandparents on both sides were active in local politics and they impressed upon me the importance of public service to advance social justice issues. The deep-seated nature of systemic racism requires us to make continuous choices and take continuous action to advance anti-racist ideas in the public space.”

Lapin encouraged those interested in making a change locally to run for office, or at least register to vote. The Cooperstown chapter of the League of Women Voters and the Oneonta chapter of the NAACP were on hand to collect voter registration forms.

“Of all the ethnic groups represented in the U.S. today, it is claimed that Asians are the highest-achieving and most successful,” said Han, the American-born daughter of Korean immigrants. “We’re good at math, we become doctors or work in tech. We’re living the American dream! Our ‘tiger moms’ put pressure on us, but we’re otherwise uniformly uncomplaining and non-problematic. Some claim it’s due to traits in our genes; others claim it’s due to Asian culture.”

“On the surface, this myth seems like it may be a positive one, but I think all of us understand that true freedom comes from justice and equity and our recognition of unhappy truths and our rejection of even the happiest lie,” she continued. “Like every other stereotype, the model minority myth conceals a diversity of experiences. It distracts us from the history and the circumstances that make the American Dream real or not for every single one of us … As a cultural anthropologist, I can assure you that the values of learning and teaching are foundational to every human culture.”

“At that time, I didn’t understand the significance of the hyphen between the words ‘Asian’ and ‘American,’ and it’s this complex space that we’re talking about today,” she said.

Shim, who served two tours as an Army combat trauma surgeon in Afghanistan, described how the COVID-19 pandemic exacerbated the country’s long history of anti-Asian hate crimes and discrimination, which are often “overlooked and under-reported.”

Liane Hirabayashi, senior research coordinator at Bassett’s New York Center for Agricultural Medicine and Health and co-president of the Cooperstown chapter of the League of Women Voters, related her father’s tales of being forcibly relocated to a concentration camp with his teenage siblings, who were American-born to Japanese parents, in 1942.

“The government bowed to pressure and hysteria and took away their freedom, all from this fear of what is different, which turns to suspicion and hatred and more words and actions,” Hirabayashi said.

“Be a good citizen, and stand up for what you believe in. In the face of manifest injustice, silence is compliance,” she continued. “My friends, my neighbors, let your voice be heard and lead you to act: side by side with these students who, with this rally, have made their ideas a reality.”

COOPERSTOWN - Calling hours for Helen Winnie Mulligan, 101, who died March 15, 2021, will be held from 4:30 to 7 p.m., Friday May 14, at Tillapaugh Funeral Home in Cooperstown. The Liturgy of Christian Burial officiated by Father Michael Cambi, Pastor of St. Mary's "Our Lady of the Lake" Rom…

MOUNT VISION - Thomas J. O'Neill, 90, of Mount Vision, formerly of New Rochelle, passed away May 10, 2021, at Bassett Medical Center, Cooperstown, with his loving family by his side. Thomas was born May 13, 1930, in New Rochelle, the son of the late John and Mary (Seery) O'Neill. He married …

GILBOA - Leslie Allen Buel, 82, passed away following a short illness on Saturday, May 8, 2021. He was predeceased by his parents, Charles and Pearl (VanAken) Buel; several cousins; his wife of 57 years, Roma M. (Lafferty) Buel; and grandson, Sean. Leslie leaves behind his brother, Clayton (…