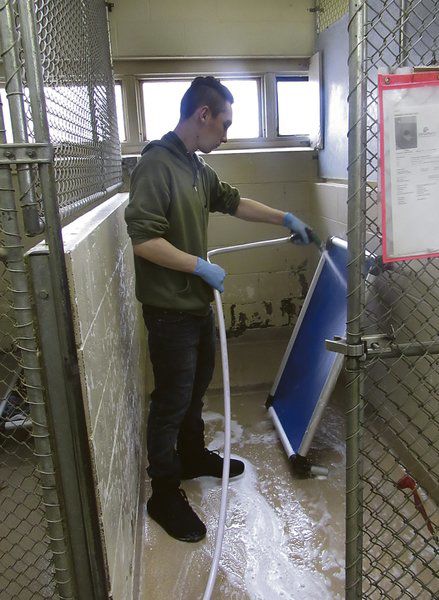 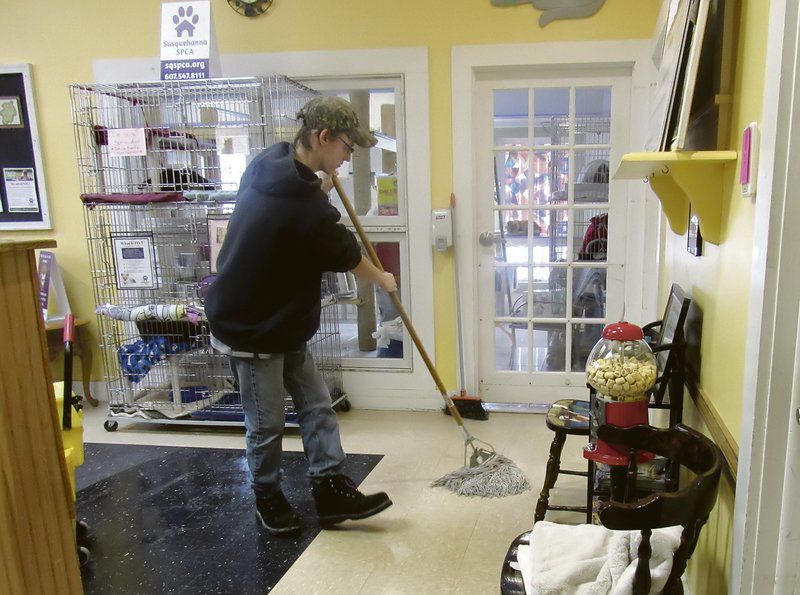 HYDE PARK — For the past 10 weeks, three local students have dedicated each morning before school to help out the animals of the Susquehanna SPCA.

In return, they’re gaining valuable skills that will help them take on the working world, according to Yvonne Angell, the students’ job coach. Fifteen-year-old Kadin Winfield, 16-year-old Jason Provost and 16-year-old Michael Davis of Laurens Central School were finishing up their last day of the work-based learning program at the SQSPCA on Friday.

“They’re here to volunteer, help and also learn the different things necessary in the world of work,” Angell said.

Davis mopped the floor and tidied up at the shelter’s entrance while Winfield and Provost made sure the dog kennels were spotless in the back.

Walking out of a freshly scrubbed kennel, Winfield joked that the thing he’d remember the most from his time at the SQSPCA was the wet shoes.

He said having three dogs of his own — a German shepherd, a yorkie and a sharpei mix — helped him see the importance of making life a little easier for shelter animals. He said he’s particularly enjoyed helping the dogs, which he has done everyday, saying he would miss seeing them each morning.

Davis also said his favorite part of the program was helping out the dogs. He showed equal enthusiasm as he cleaned in the cat room, but was careful not to wake up Bart, a sleepy long-haired orange and white cat lounging in the cat tree.

Provost said he’s enjoyed working with other people and learning new things. A fan of animals, Provost said through his time at the SQSPCA, he’s learned how to take better care of them.

SQSPCA Executive Director Stacie Haynes said the program is also a win for the animals because they get extra socialization when the students are around them.

“Everything just worked out really nicely,” Haynes said. “The students had the job coach here to help with them. They really were helpful and coachable, and they wanted to be an asset to our team and to learn. And they really did. We saw improvements in everything — the work they were doing, the work ethic ... We were just really impressed by the whole thing and are really, truly going to miss them.”

Winfield, Davis and Provost will head to Pathfinder Village for their next work-based learning experience, and will continue their experience at Mount Vision Garden Center after that. Their first 10 weeks of the program were spent at the Otsego ReUse Center.

At the end of the SQSPCA leg of the program, the boys were awarded certificates for their hard work and for taking on whichever job or challenge they were presented with, according to the SQSPCA’s Facebook page.