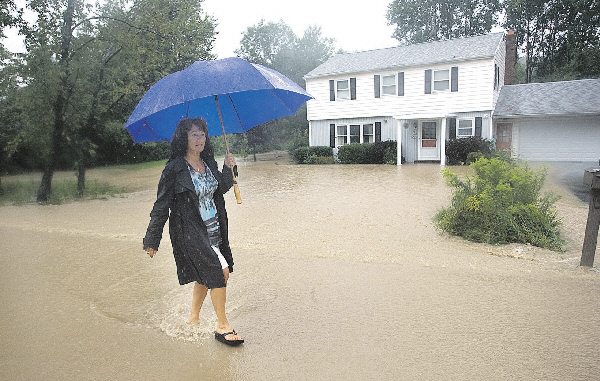 Benjamin Patton | The Daily StarMaria McMullen, of Oneonta, walks to her house on Jefferson Ave. on Wednesday, September 07, 2011 after emergency crews closed the road to traffic. McMullen is a teacher at Greater Plains Elementary School and wanted to retrieve clothes for school the next day.Benjamin Patton 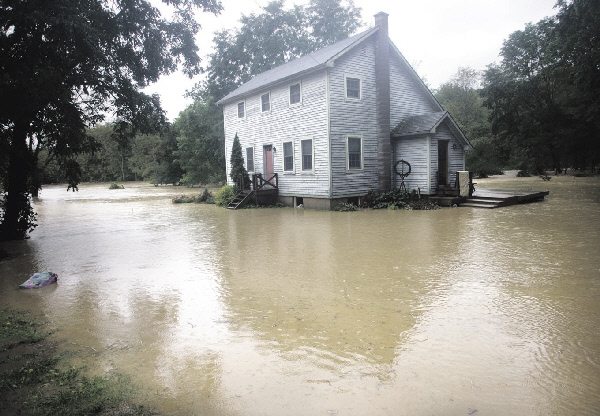 Benjamin Patton | The Daily StarFloodwaters flow around a home at 119 County Highway 11 in Oneonta on Wednesday, September 07, 2011.Benjamin Patton

Benjamin Patton | The Daily StarMaria McMullen, of Oneonta, walks to her house on Jefferson Ave. on Wednesday, September 07, 2011 after emergency crews closed the road to traffic. McMullen is a teacher at Greater Plains Elementary School and wanted to retrieve clothes for school the next day.Benjamin Patton

Benjamin Patton | The Daily StarFloodwaters flow around a home at 119 County Highway 11 in Oneonta on Wednesday, September 07, 2011.Benjamin Patton

Flash flooding and road closings around the area Wednesday followed the remnants of Tropical Storm Lee. Further flooding is expected today, especially at locations along the Susquehanna River. People in low-lying areas in the village of Sidney were evacuated to shelters, with the river expected to crest by noon today, Mayor Andrew Matviak said.

The worst flooding was in Otsego with roads closed until further notice, National Weather Service meteorologist Mike Evans said. Chenango County was also hard hit, he said. The heaviest rain ended at about 7 p.m., with 2 to 5 inches in Otsego, and 3 to 7 inches falling in Chenango, he said. Another 1 to 1½ inches were expected overnight. This will bring the chance of significant flooding along the Susquehanna.

Most schools around the area were dismissed early Wednesday because of the rain. Gov. Andrew Cuomo announced Wednesday that resources reflecting the state's full emergency response capacity have been deployed to Broome County as heavy rains from Tropical Storm Lee caused flood levels at the Susquehanna and other Southern Tier creeks and tributaries.

Oneonta Mayor Richard Miller declared a state of emergency in the city at 3:15 p.m. This closed all roads except for emergency vehicles. The floodgates were installed in Neahwa Park, and the water release from the city dam Wednesday afternoon worked well, he said.

Residents in the Meadowbrook area, above the high school, were evacuated as a precaution, but he did not know of any problems.

There were some individual homeowners with problems as a result of flash flooding, he said.

But the various city agencies involved did "a first-class job" getting out ahead of most problems so far.

"We'll have to wait and see what happens with Wednesday overnight rains," he said.

A state of emergency was declared in Otsego County after numerous road washouts were reported, first in Unadilla, and then in every town, Emergency Services Coordinator Kevin Ritton said. He was still working on the situation Wednesday evening, assessing the possible need to evacuate localities along the Susquehanna if the water continued to rise. The county has set up an emergency shelter in Oneonta at St. Mary's Parish Center, at the corner of Walnut and Elm streets.

Otego Mayor Ernie Kroll said about 15 homes were evacuated as a precaution in areas of the village that were flooded in 2006.

"We are not going to take any chances," he said.

In Delaware County, EMS coordinator Stephen Hood said there is expected to be significant flooding in the Sidney area. The village and town of Sidney have declared a state of emergency in both municipalities because of flooding. Both were effective as of 6:30 p.m. All roads in both municipalities are closed to all travel except emergency service vehicles.

Sidney village residents living in flood-prone areas are being evacuted, Mayor Andrew Matviak said. A shelter at St. Luke's Lutheran Church is full but one at the high school has room. The river is supposed to peak at noon today. He will meet with emergency service personnel to assess the situation at 8 a.m., he said. There was concern Wednesday afternoon in the Downsville area with the Pepacton Dam spilling, which was expected to continue until Thursday afternoon, Hood said. There was some evacuation in low-lying areas in the town of Colchester, but the water level had apparently peaked, he said.

A boil-water advisory has been issued to Downsville residents. A leak is suspected in their water system and the storage tank levels remain very low. The boil-water advisory will remain in effect until the leak is found and repaired, and water testing is completed.

Downsville Central School is among the schools that were closed today.

There was a mixed picture in the area hit by recent flooding. The water levels were up quickly in the Margaretville area but the rain stopped before there was any further damage, Hood said. About 25 people were evacuated in Fleischmanns. A shelter was opened but nobody came by Wednesday afternoon, Hood said.

Schoharie County public information officer Karen Miller said there was some moderate flooding along the Schoharie Creek because of overflow at the Gilboa Dam. It peaked around 2:15 p.m. and started to recede. People in towns including Blenheim, Middleburgh, Schoharie, Central Bridge and Esperance were evacuated but will return as waters recede, she said.

Chenango County Emergency Services said that several roads are closed because of flash flooding. The Canasawacta Creek from Pharsalia to the City of Norwich is rising rapidly and may flood this evening or overnight, the agency said. It is advising residents who live along the creek to move to higher ground and to refrain from traveling through areas of standing water. A shelter is being set up at the Chenango BOCES Center on county Route 32, East River Road, in Norwich.