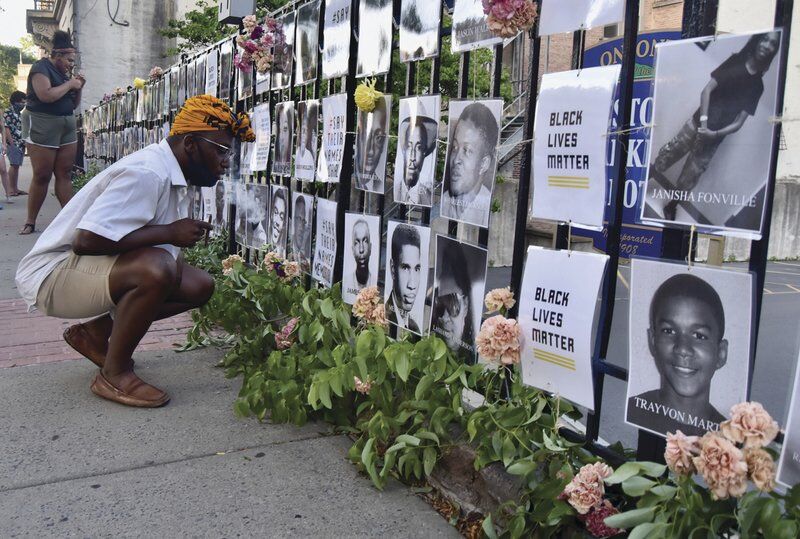 Sarah Eames | The Daily StarOneonta resident Jonathan Brown blows cigar smoke onto portraits of Black victims of police brutality and racism in tribute to those honored in a Black Lives Matter "living memorial" in Oneonta on Sunday. 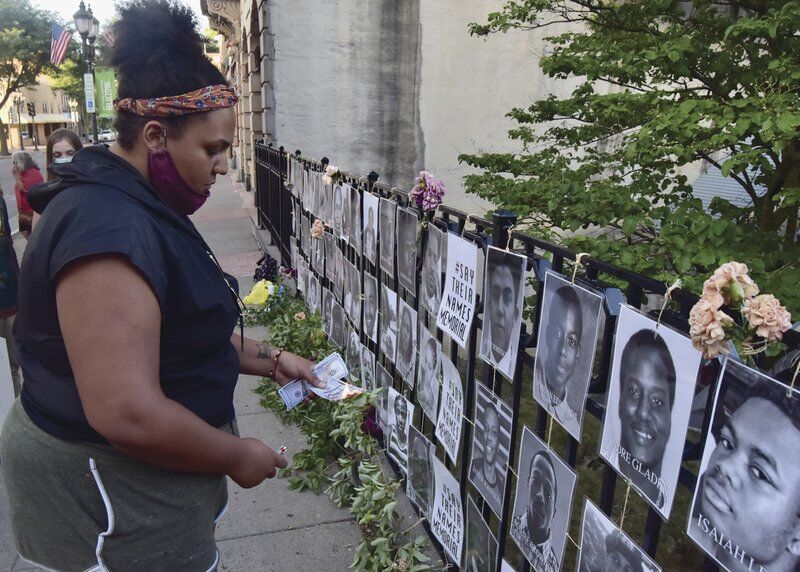 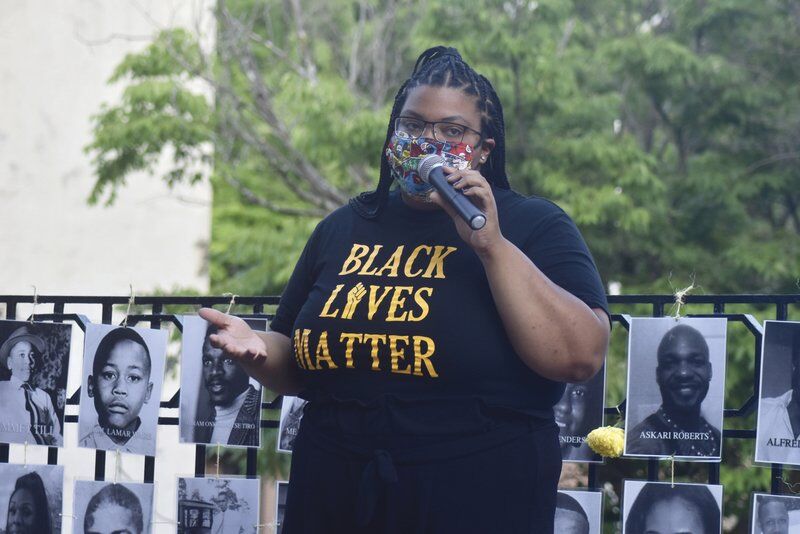 Sarah Eames | The Daily StarOneonta resident Diandra Sangetti-Daniels addresses a crowd of more than 50 at the Sunday evening unveiling of a Black Lives Matter memorial downtown. 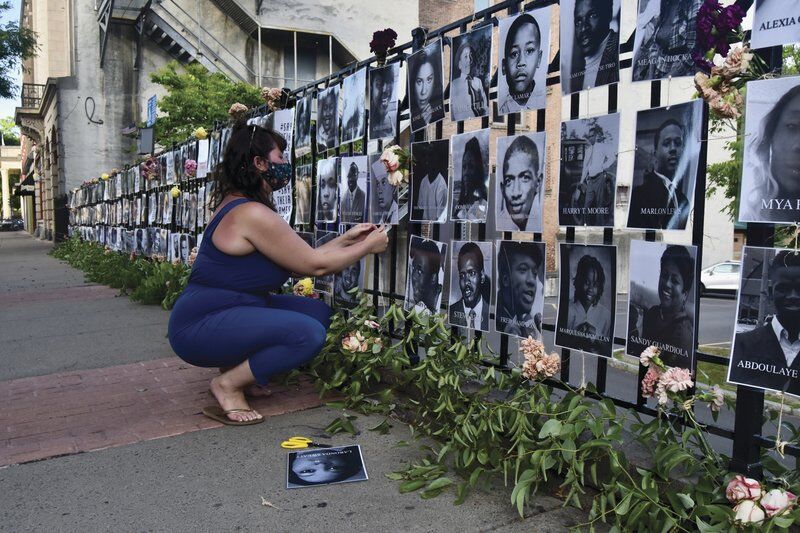 Germantown resident Elizabeth Patterson, formerly of Oneonta, adjusts the portrait of Samuel Leamon Younge Jr., a civil rights activist who was murdered in 1966 for trying to desegregate a "whites only" restroom in Tuskegee, Alabama. 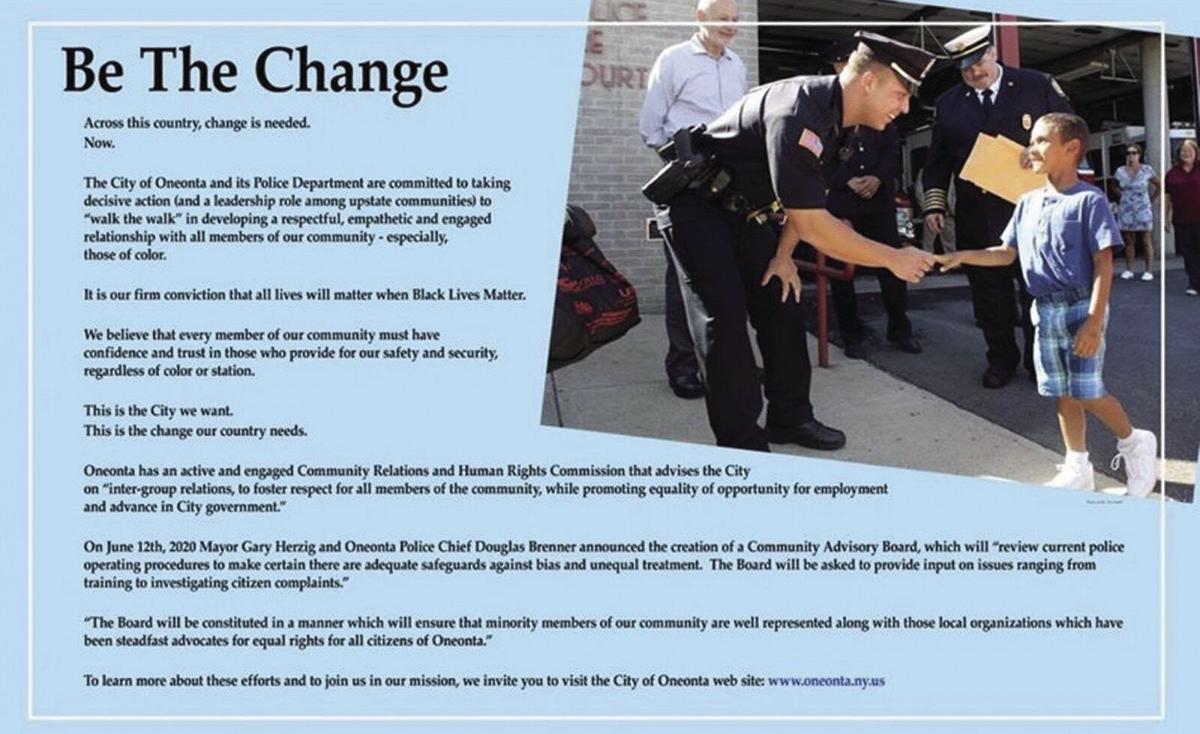 A flyer promoting the Community Advisory Board on policing is shown.

Sarah Eames | The Daily StarOneonta resident Jonathan Brown blows cigar smoke onto portraits of Black victims of police brutality and racism in tribute to those honored in a Black Lives Matter "living memorial" in Oneonta on Sunday.

Sarah Eames | The Daily StarOneonta resident Diandra Sangetti-Daniels addresses a crowd of more than 50 at the Sunday evening unveiling of a Black Lives Matter memorial downtown.

Germantown resident Elizabeth Patterson, formerly of Oneonta, adjusts the portrait of Samuel Leamon Younge Jr., a civil rights activist who was murdered in 1966 for trying to desegregate a "whites only" restroom in Tuskegee, Alabama.

ONEONTA — Nearly two hundred portraits of Black men, women and children, tethered in columns of three to the spires of a steel fence overlooking the Westcott Lot, will honor the victims of a bloody legacy of more than 60 years in a three-week “living memorial” installment.

“The #SayTheirNamesMemorial recognizes Black lives wrongfully taken by injustice, racism and police brutality,” reads a sign posted alongside the portraits and names of the deceased. “This is a living memorial; please help us spread awareness and honor the lives of those taken too soon.”

The victims ranged in age and renown, from 14-year-old Emmett Till, lynched in 1955 after being accused of whistling at a white woman in Mississippi, to Tamir Rice, a 12-year-old shot by a police officer in 2014 while holding a toy gun on a Cleveland playground.

Among the victims honored in the display is Jason Walker, a 22-year-old Oneonta resident who was stabbed to death in 2005 by 20-year-old Francis J. Ricca during a party on Chestnut Street. Ricca was later acquitted by a jury after his attorney successfully argued that the murder was committed in self-defense, according to Germantown resident Elizabeth Patterson, a former Oneonta resident and classmate of Ricca’s.

Patterson, who facilitated the memorial alongside Oneonta resident Diandra Sangetti-Daniels, said she was inspired by a similar memorial designed by a friend of hers that had spread across the country to cities such as Austin, Texas and Albuquerque, New Mexico.

“I’d seen it in a lot of big cities, but where I really think we need to see it are small towns like Oneonta, New York,” Patterson said. “I have grown up completely, blissfully unaware of my white privilege, and it has taken me far too long to realize that my passive stance of ‘I’m a good person’ is not working and it’s not OK.”

Patterson said she hopes the memorial can serve as a “wake-up call” and a learning opportunity for local residents.

“This is devastating,” she said. “Now that we have such an influx of sad and dramatic news, it’s really time — way past time, way past due — that we really start to change things.”

The memorial’s public installation on city property required permission from the Oneonta Common Council and was unanimously approved at its July 21 meeting, but not without opposition from some members of the community, including Oneonta Police Chief Doug Brenner.

“Any display that could have ramifications that are potentially divisive to the City of Oneonta, its residents and its businesses, is not an image that should be promoted,” Brenner wrote in a July 19 letter to Mayor Herzig.

Brenner attributed what he described as a “national shortage of those who wish to serve their community” to police officers across the country coming “under attack for the disturbing and unlawful actions of a few other law enforcement officials from other agencies.”

Citing two unfilled patrol officer positions within the department and two current members eligible for retirement, Brenner warned that “if my officers sense that the City of Oneonta is not supporting their hard work, their dedication to community, their professionalism, their unwavering dedication to fairness by allowing a divisive display, the probability of losing more officers increases.”

“A display that intentionally shows all members of law enforcement in a negative light based on the actions of a few from well outside our area would be devastating to the morale of the finest officers I have ever had the pleasure to work with and lead,” he concluded.

“When we wanted to bring this here, it was not fully accepted and fully wanted, and I think that it shows that people are really scared to look at the issues that we have in this community,” Patterson said. “That means that we need to show up even more. We need to really have these hard conversations for change.”

“I read that letter and I thought to myself: if that’s the case, if your officers are truly representing and protecting every single Oneonta resident, then obviously you would have no problem supporting a memorial in which other officers weren’t,” Sangetti-Daniels said. “To have someone in that position of power not understand the Black experience in Oneonta is extremely problematic.”

Even after the Common Council voted in favor of installing the memorial, Brenner requested that the organizers expand the memorial to include police officers who died in the line of duty, Sangetti-Daniels said, decrying what she described as an attempt to “share or overwhelm the spotlight on people who were killed by police officers.”

Sangetti-Daniels said she received a flyer she deemed propaganda, showing a white police officer bending down next to a young Black boy in front of the Oneonta Public Safety Building as Mayor Gary Herzig and others looked on.

Citing testimony at recent demonstrations from Black residents of Oneonta and the surrounding area detailing their interactions with the Oneonta Police Department, Sangetti-Daniels said the department’s history is “not positive.”

“This is not only a chance to honor those we’ve lost, it’s a chance for us to make sure that these deaths weren’t in vain; that now we’re taking our anger and our frustration and we’re channeling it into changing policies and mobilizing,” Sangetti-Daniels said.