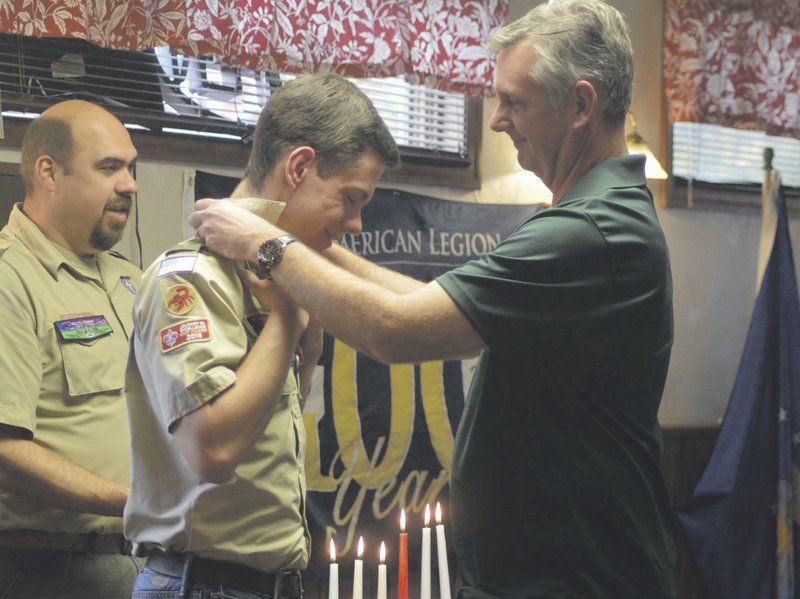 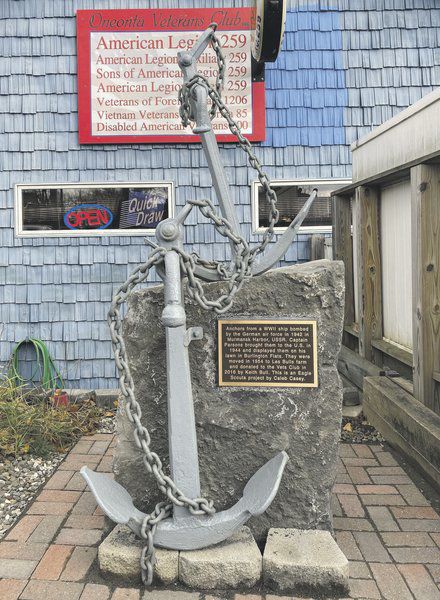 Sarah Eames | The Daily StarTwo anchors restored by Oneonta resident Caleb Casey for his Eagle Scout project are displayed in front of the Oneonta Veterans Club. The plaque reads: ‘Anchors from a WWII ship bombed by the German air force in 1942 in Murmansk Harbor, USSR. Captain Parsons brought them to the U.S. in 1944 and displayed them on his lawn in Burlington Flats. They were moved in 1954 to Les Bulls farm and donated to the Vets Club in 2016 by Keith Bull. This is an Eagle Scouts project by Caleb Casey.’

Sarah Eames | The Daily StarTwo anchors restored by Oneonta resident Caleb Casey for his Eagle Scout project are displayed in front of the Oneonta Veterans Club. The plaque reads: ‘Anchors from a WWII ship bombed by the German air force in 1942 in Murmansk Harbor, USSR. Captain Parsons brought them to the U.S. in 1944 and displayed them on his lawn in Burlington Flats. They were moved in 1954 to Les Bulls farm and donated to the Vets Club in 2016 by Keith Bull. This is an Eagle Scouts project by Caleb Casey.’

ONEONTA — Members of Boy Scout Troop 23 and the regional Leatherstocking Council gathered Sunday to honor the scouting career accomplishments of Caleb Casey as he officially attained the rank of Eagle Scout.

Senior patrol leader Steven Baker lead members of Troop 23 in reciting the Scout Oath and the Scout Law. He described the process of attaining the rank of Eagle Scout, rising from a Tenderfoot to a Life Scout.

“To attain the highest rank in scouting requires six more months of activity with the troop, a minimum of 21 total merit badges and, of course, leadership in an extensive service project of their own making,” Baker said.

He explained the symbolism of the Eagle as representing “those things which are most valued in a scout: a strength in character, commitment to the community, and a well-earned respect from both peers and mentors.”

“Caleb first came to the Oneonta Veterans Club with a few ideas for his Eagle project, and very good ideas they were,” said Gary Ballard, commander of Oneonta American Legion Post 259.

Caleb coordinated with Legion members to restore* the headstones of veterans in four local cemeteries, Ballard said, and “in doing so, he not only honored the veterans who were buried there, but he also found other veterans’ graves that were not marked.”

“I hate to see any veteran go unhonored by not having a marked grave, and he accomplished that through his work,” Ballard continued. “A lot of the families and the community were very grateful to see that their veterans’ or loved ones’ graves were properly marked in this way.”

The second phase of Caleb’s project involved the restoration of two anchors brought back to the United States after a 1942 battle in Murmansk, a port city in the former Soviet Union, Ballard said.

Capt. George Parsons, a Burlington Flats local, displayed the anchors on his lawn for several years, he said. The anchors changed hands a few times before they were donated to the Oneonta Veterans Club by Ken Bulls in 2016.

“Unfortunately, they got sand-blasted and primed, but never made it to the display,” Ballard said. “So Caleb took on the project to display the anchors for the community to see, and a plaque was made and placed to commemorate the history of the anchors.”

“I want to personally thank everybody — I want to thank Caleb, his parents, his scout leaders that are sitting here, all the people involved, everybody who helped in this project,” he continued. “This is very important to us, to the community and to the history of the anchors.”

Scoutmaster David Murell confirmed that Caleb “honorably fulfilled all requirements for the rank of Eagle Scout,” and led all Eagle Scouts in attendance in reciting the Eagle Scout pledge to officially induct him.

Murell called upon Caleb’s parents, Paul and Renee, to pin the Eagle medal and place the Eagle bolo on their son.

“Though not physically with you on your scouting activities, your mother supported and encouraged you through your scouting career,” Murell said as Caleb fastened the Eagle Mother pin on Renee’s collar.

“Your father was at your side throughout your scouting journey, serving both as your most steady adviser and most devoted champion,” he said as Caleb pinned the Eagle Father pin on Paul’s collar.

Caleb thanked Ballard for assisting with his projects, and his scoutmasters for guiding him through the process.

“I’ve spent 12 years in Cub Scouts and Scouts as a whole, and there’s a lot of people who were with me through it,” he said, naming assistant scoutmasters Scott Kolberg and Pete Casola, committee chair David Flynn and others.

“All of these mentors treated me with patience when I wasn’t worthy of it,” Caleb said. “They were light with the reprimands, yet heavy with the encouragement. For all that, I’ll always be grateful.”

Caleb awarded the mentor’s pin to Morell, “for his dedication to both me personally and the troop as a whole.”

“I think Caleb has that gift and ability to give  something amazing back, and it shows in his hard work,” Morell said.

Caleb is one of four members remaining from the original Tiger Cub den formed when the boys were in first grade, he said.

“It’s been amazing to be a part of Caleb’s and this group’s scouting career,” Morell said. “When we started, they were all smaller than me, and now they are all bigger than me.”

“For anyone that knows Caleb, I think we can all agree he’s one of a kind, but I wouldn’t change a thing,” he continued. “He’s always looked at the world in a slightly different way, and in my experience working with scouts, adults, students in my class and my own children, I think we need that in today’s world.”

Awarding Caleb his Eagle Scout patch and certificate, Morell said in closing: “I’m privileged to know Caleb and all his abilities. I’m proud of all that you’ve done, and I’m looking forward to everything that you do in the future.”