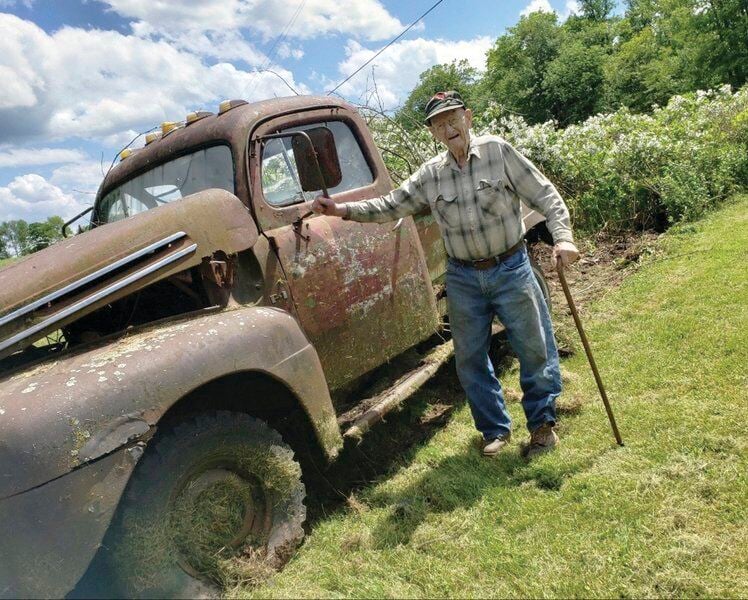 Contributed Clarence Zurn is shown with his 1949 Ford pickup truck in this undated photo. 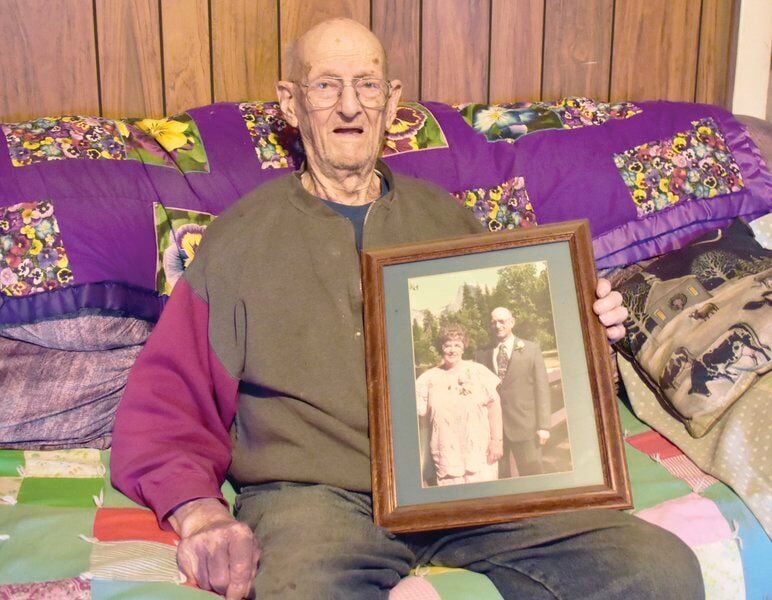 Sarah Eames | The Daily Star ABOVE: Clarence Zurn, who will turn 100 on April 7, sits on the couch of his Long Eddy home, holding a framed photo of him and his late wife, Leona Eunice Smith Zurn, on Wednesday, March 31. RIGHT: Zurn is shown with his 1949 Ford pickup truck.

Contributed Clarence Zurn is shown with his 1949 Ford pickup truck in this undated photo.

Sarah Eames | The Daily Star ABOVE: Clarence Zurn, who will turn 100 on April 7, sits on the couch of his Long Eddy home, holding a framed photo of him and his late wife, Leona Eunice Smith Zurn, on Wednesday, March 31. RIGHT: Zurn is shown with his 1949 Ford pickup truck.

LONG EDDY — Clarence Zurn, one week away from his 100th birthday, has outlived every one of his relatives since his ancestors arrived in the United States from England and Germany several generations earlier.

The secret to his longevity, Zurn said, is eating oatmeal with blueberries every day and drinking lots of milk. The soon-to-be-centenarian was born April 7, 1921, in Johnson City, at what is now Wilson Medical Center — then a hospital for the families of Endicott-Johnson workers — to dairy farmers Clarence Cecil Zurn and Blanche Jenson Zurn, who worked for the Southern Tier shoe manufacturer at the time.

When Clarence was 3 years old, the family moved to the French Woods area of the town of Hancock, where he and his brothers, Charles and Elmer, spent their summer afternoons playing baseball, he said. The Zurn boys attended a one-room schoolhouse in Pea Brook, next to the cemetery and the Methodist church that the family attended on Sundays.

Clarence Zurn graduated from Hancock Central School in 1938. It would be nearly another decade before the Zurn family home, now at the end of Silas Tompkins Road, was wired for electricity.

Zurn and his wife, Leona Eunice Smith — the daughter of another dairy farming family from just over the border in Stockport, Pennsylvania, whom he married in 1952 — raised their four children, Robert, Dennis, Peggy and Frederick, in the same house his parents lived in.

Zurn said he knew the man that Silas Tompkins Road is named after — a former neighbor, whom he once saved from near death in his own home — and those for whom the other roads in the area are named.

“When it came time to name the roads, someone suggested naming it Zurn Road, but Silas was the oldest one on the road at the time — he was 95 — and I thought he deserved it more,” Zurn said.

Zurn can recall when the dirt road where he spent nearly 97 years of his life was transformed from a horse-and-buggy path to a street wide enough for a full-size snow plow to traverse. He said he remembers the development of state Route 17, necessitated in part by the midcentury growth of Catskills tourism.

Zurn lived through many of history’s great milestones throughout the 20th century — the D-Day invasion at Normandy, Neil Armstrong and Buzz Aldrin’s first steps on the moon, the assassinations of countless political leaders — but said he wasn’t impressed by many of them.

“A lot of people were interested in that, but those of us around here didn’t have a lot to do with it,” he said.

In 1986, Zurn retired his farming operation, which by then had expanded to include cauliflower crops.

“There wasn’t a dairy farmer left in Hancock at the time,” he recalled.

Zurn worked for several years as a courier for the Callicoon Community Bank, ferrying thousand-dollar bags of quarters between its five branches, and also served as Hancock town assessor from 1990 to 2010.

In his free time, Zurn said, he enjoys hunting deer, fishing in the Delaware River and reading “just about anything.” A fan of waltzes and polka, Zurn said he is an ardent admirer of American accordionist Lawrence Welk. As his mobility allows, he still rides his tractor and helps chop his own wood.

A surprise drive-by parade in honor of Zurn’s birthday is scheduled for 2 p.m. Saturday, April 3, at his home at 1789 Silas Tompkins Road, Hancock, NY 12760. Cards mailed to his home are also welcome.