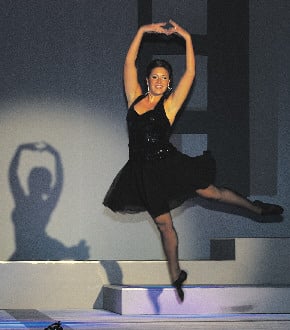 Contributed photo Elisabeth Baldanza, Miss New York 2007, dances to ``If They Could See Me Now’’ during performances at the Miss New York pageant in Dix Hills on Friday. 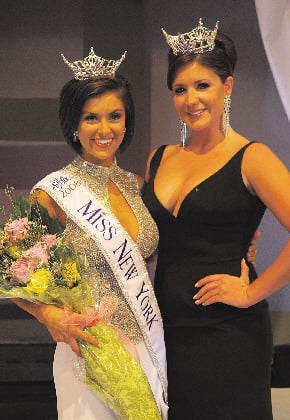 Contributed photo Elisabeth Baldanza, Miss New York 2007, dances to ``If They Could See Me Now’’ during performances at the Miss New York pageant in Dix Hills on Friday.

Miss New York 2007 has completed her reign and is returning to the area to work in Oneonta.

Elisabeth Baldanza, 24, of East Meredith, said Sunday the past year has been one of unexpected opportunities and experiences. She had her first ride on a plane, went on her first cruise and moved to New York City. She met ``wonderful people'' and made friendships she said she hopes last a lifetime.

``I feel very fortunate to have had the opportunity to be Miss New York,'' Baldanza said Sunday during a drive to her apartment in Brooklyn. ``It has changed my life in ways I probably won't even realize for years.''

Baldanza said she will start Aug. 1 as a residence hall director at the State University College at Oneonta.

Last week was spent wrapping up her reign as Miss New York.

Baldanza said she was rehearsing with and getting to know competitors for the 2008 crown. Pageants this year and last had about 20 competitors.

The event at the Dix Hills Performing Arts Center on Long Island featured a preliminary competition Friday and a final show Saturday, when Leigh-Taylor Smith, Miss Brooklyn, won the title.

Baldanza said she wants to continue sharing her ``be true to yourself'' message and encouraging children to make good decisions. As Miss New York, she took that subject as her issues platform to schools across the state and to the stage of the Miss America pageant in Las Vegas in January. Baldanza also made many public appearances at parades and at community group meetings.

Baldanza said she had applied for a residence hall director job at SUCO last summer, but she appeared for her interview the Tuesday after the pageant to say she'd been crowned Miss New York. She had to apply again this year for the position.

``It's a really great opportunity,'' said Baldanza, who was a resident adviser for three years in college. ``I really like working with college students.''

Baldanza said she would like to earn a graduate degree in social work and develop a career in public speaking, with a focus in helping women build self-esteem.

Fran Baldanza, Elisabeth's mother, said there is no question she is proud of each of her six children. In Elisabeth's case, she is particularly proud that she has a genuine approach to people. She said a chaperone assigned to competitors in Las Vegas told her ``Your daughter is the most beautiful person inside,'' and that was just one example of compliments she has heard.

``The person she is is the thing I am proudest of,'' Fran Baldanza said.

Elisabeth's parents, Al and Fran, and many other family members went to Long Island and to Las Vegas to watch her compete. Fran Baldanza said the year has been a family event that has created many good memories.

Elisabeth graduated in 2002 from Lighthouse Christian Academy in Oneonta. She received her degree in marriage and family studies in 2007 from Mercyhurst College in Erie, Pa. Baldanza won the Miss Empire Rose pageant in Albany, which qualified her to compete to be Miss New York.

While growing up locally, she studied dance and performed in Orpheus Theatre productions. She said she was grateful to the ``wonderful community that has been so supportive this year and all my life.

``I have always felt I grew up in a wonderful place,'' Baldanza said. She took her contemporary ballet talent into the pageant world and said Sunday she would like to teach dance and be involved in theater productions.

The 1945 Miss America was Bess Myerson, the first Jewish winner, and Vanessa Williams became the first black winner in 1984. They, and Miss New York Tawny Godin, who became Miss America 1976, worked professionally in entertainment and the media.

Baldanza said the most rewarding part of her year as Miss New York was going into schools to speak with children, an opportunity she attributed to ``the power of the crown.''

In speaking with children, Baldanza said, she emphasizes that each decision can have a positive or negative impact, large or small. She suggests children consider whether their decisions would move them toward or away from goals they have identified for themselves. She said her advice: ``Think through your decision.''

``I feel so privileged to have been able to share with others some of the ideas that I believe can better their lives,'' she said in closing remarks prepared for last week. Impacting the lives of others is the one part of this fairy-tale year that I hope to be able to continue.''