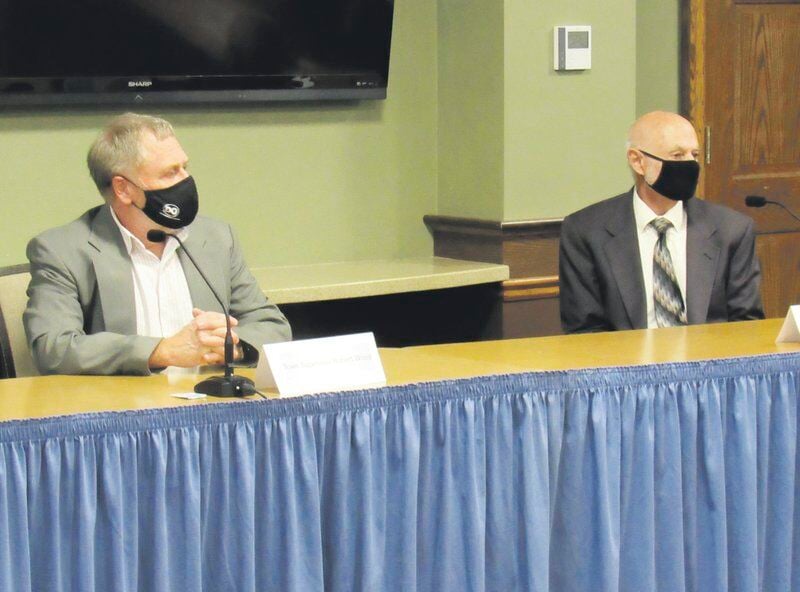 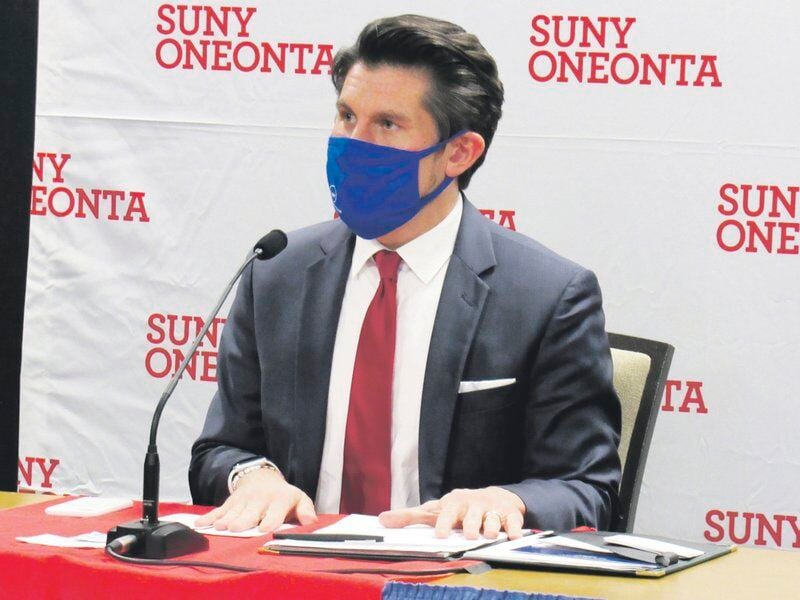 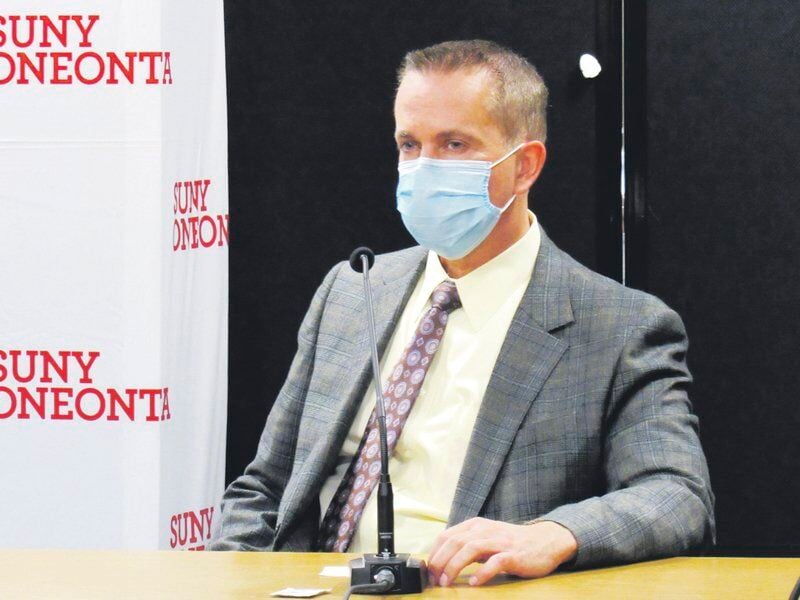 Robert Cairns | The Daily Star Dennis Craig answers questions at a media conference after being announced as interim president of SUNY Oneonta Thursday, Oct. 15. He replaces Barbara Jean Morris, who resigned as president of the college.

Robert Cairns | The Daily Star Dennis Craig answers questions at a media conference after being announced as interim president of SUNY Oneonta Thursday, Oct. 15. He replaces Barbara Jean Morris, who resigned as president of the college.

If SUNY Oneonta students are able to return to campus for the spring semester, they'll be greeted by a new college president.

State University of New York Chancellor Jim Malatras announced Thursday afternoon that President Barbara Jean Morris had resigned and that Dennis Craig will serve as acting president. The announcement was made in the Morris Hall Conference Center on the SUNY Oneonta campus.

Craig comes to Oneonta from SUNY Purchase in Westchester County, where he served as interim president. The SUNY Board of Trustees approved the appointment "about an hour ago," Craig said at a 12:30 p.m. media conference. It is effective immediately.

"He will serve here as long as we need him to serve," Malatras said.

Little was said about Morris, who came under fire when COVID-19 cases ballooned to more than 700 shortly after the arrival of students for the fall semester. Because of the outbreak, in-person classes were canceled for the remainder of the the semester and students have moved to remote instruction. Students were moved out of on-campus housing, though some remain in off-campus housing in the community.

SUNY Oneonta is the only one of SUNY's 64 colleges and universities that was forced to take such drastic measures, though others have seen suspensions of in-person learning for two-week periods during increases in COVID-19 cases,

Malatras said Morris "informed me that she was pursuing other opportunities" last week.

Later, in response to a question from a reporter, he said, "Her decision to resign was of her own volition."

Malatras said Craig "has the right temperament" to guide the college through its current challenges.

He said it is not yet known if students will return to campus for the spring semester, though officials are working toward that goal. He said students and parents "have expressed interest" in resuming traditional college life.

"We'll have to be more vigilant than ever," he said. He said college stakeholders and the wider community must be confident in a reopening plan. "There is a lot of work to do," he said.

Keys to reopening, he said, are more testing, transparency in communications and compliance with health and safety rules. The Oneonta outbreak was blamed on students who ignored social distancing and face-covering regulations, allowing the virus to spread through the campus.

"Only a small handful of people on our campuses are not complying with the guidance," he said.

Craig said he welcomes the opportunity to lead the college. "We want to take traditions here at SUNY Oneonta and have continuity and be able to move forward," he said. "I'm committed to communicating. It's very important to me."

Craig told The Daily Star the call to come to Oneonta was "very sudden," and that his colleagues at SUNY Purchase were "immensely supportive."

He said Oneonta presents different challenges because the college and the community are "joined at the hip." He said the two are "inextricable linked, for better or worse," and added, "We want it to be better."

He admitted  that coming to the college under the current circumstances presents challenges. "I don't have any illusions or misconceptions about the difficulty," he said.

Oneonta Town Supervisor Robert Wood and Mayor Gary Herzig attended the media conference after meeting with Malatras, Craig and other SUNY officials. Afterward, both expressed optimism about the future.

"I'm quite encouraged and I hope things will improve," Wood told The Daily Star. He noted the importance of the college to the town's culture and economy, and said, "I hope they're successful and are able to get things going."

Herzig said, "I believe we will work in partnership."

He cited efforts to contain the COVID-19 outbreak and the testing the state provided to the community, saying transmission from the students to the larger community was stopped.

Herzig said he was encouraged by Craig's comments. "I think President Craig has that mix of partnership and commitment," he said. "We all want the college to be open for the spring, but we have to do it safely."

According to a media release, a search for a permanent president is expected to begin soon

The Daily Star's four-county region of Chenango, Delaware, Otsego and Schoharie counties has had 8,199 confirmed cases of COVID-19, an increas…

ONEONTA — A day after the resignation of SUNY Oneonta President Barbara Jean Morris, local officials said they want to focus on the future of …