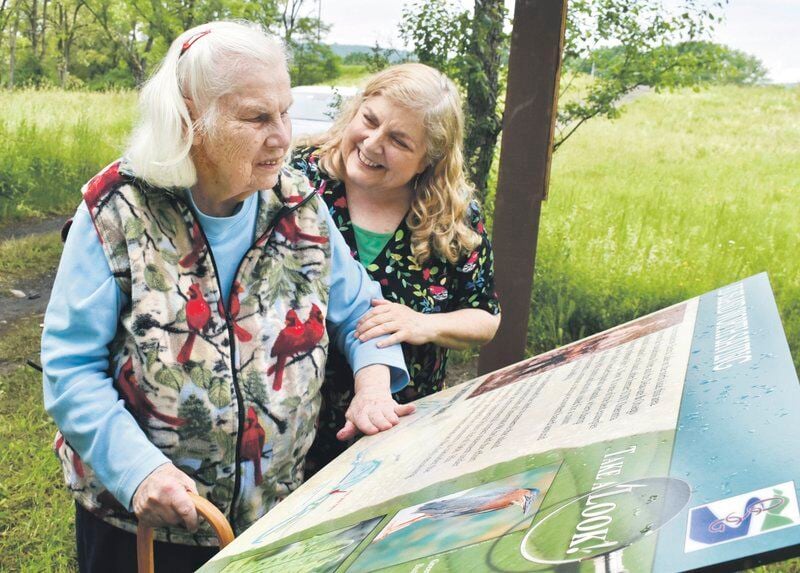 Sarah Eames | The Daily Star Betty New, the widow of Dr. John G. New, for whom New Island in Oneonta is named, and her daughter, Nancy, look at a picture of her late husband on a trail sign recently installed by the Oneonta Susquehanna Greenway on Tuesday, June 8. 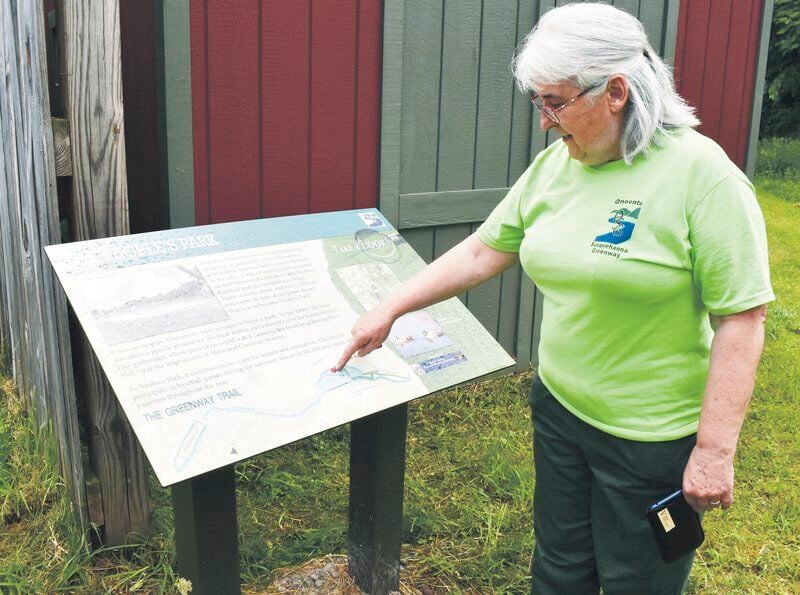 Sarah Eames | The Daily StarDonna Vogler, president of the Otsego County Conservation Association and member of the Oneonta Susquehanna Greenway, points to a map of the greenway trail on an interpretative sign dedicated Tuesday, June 8, in memory of the late New York State Police Investigator Ricky J. Parisian.

Sarah Eames | The Daily Star Betty New, the widow of Dr. John G. New, for whom New Island in Oneonta is named, and her daughter, Nancy, look at a picture of her late husband on a trail sign recently installed by the Oneonta Susquehanna Greenway on Tuesday, June 8.

Sarah Eames | The Daily StarDonna Vogler, president of the Otsego County Conservation Association and member of the Oneonta Susquehanna Greenway, points to a map of the greenway trail on an interpretative sign dedicated Tuesday, June 8, in memory of the late New York State Police Investigator Ricky J. Parisian.

Members of the Oneonta Susquehanna Greenway celebrated the dedication of two of five new trail signs in and around the city of Oneonta on Tuesday, June 8.

Greenway committee member Donna Vogler described the organization as “a group of local citizens who have a mission to link the many parks we have in Oneonta to some of the open space.”

The trails traverse in part the former Delaware & Ulster Railroad beds, more than a century old, forming one long loop of four trails between Interstate 88 and the Susquehanna River.

The trail system, currently in four loosely connected segments at Silas Lane and the Mill Race stream at Neahwa Park and at nearby Catella Park and New Island, are popular with runners, dog walkers, cross-country skiers, snowshoers and nature enthusiasts of every kind, Vogler said. A future extension would connect to Fortin Park at Oneonta’s East End.

“Our longer vision is to make this a real trail system, in parts and pieces, with the ultimate goal of connecting the segments into one continuous trail,” about 7 miles long once complete, said Vogler, who also serves as president of the Otsego County Conservation Association and teaches biology at SUNY Oneonta.

A sign at the northern edge of the Damaschke Field parking lot was dedicated in memory of the late Ricky “Pit” Parisian, a state trooper who was killed in the line of duty in 1994.

The Parisian Foundation was founded that same year, according to his widow, Deb Parisian. The organization’s primary fundraiser is the annual Pit Run, a 10K race beginning in Neahwa Park.

“All the money raised goes back to the community in the form of high school scholarships and grants for children’s programs, hence our interest in the Greenway project,” Deb said.

A second trail sign was dedicated at the head of the New Island trail system in memory of the late John G. New, for whom the island is named.

An island in name only, New Island was originally called Big Island when it was formed by the diversion of the Susquehanna River in 1898 to fill Electric Lake, which New York State Electric & Gas operated in order to supply power to the growing city.

The lake was drained in 1954 after falling out of use and acquired by the city in 1984, a year after New’s passing.

New Island can be accessed by pedestrians and bikers from Catella Park under the Interstate 88 overpass and crossing the on-ramp to the south side of the highway.

New was the first chair of the newly formed biology department at what would become SUNY Oneonta, from 1970 to 1981, according to his daughter, Nancy.

“There’s a lot of commitment represented here, which is so valuable,” she said, thanking members of the Greenway, the Delaware-Otsego chapter of the Audubon Society, the OCCA and the local mountain bike club.

“What’s really neat is the work that you’re all doing is working to help people know more,” Nancy said. “With knowledge comes understanding, and with understanding comes caring, and that really becomes the key to making things work and having these wonderful places in the community. I think that epitomizes Dad’s view of things.”

New was hired as a young professor out of Cornell University by College President Royal Franklin Netzer, for whom the campus administration building is named, to teach in the science department, which then encompassed the fields of physics, chemistry and biology, according to Nancy. He was also instrumental in founding the school’s biological field station in the late ‘60s/

“I like to think of him as the Lorax,” Nancy said, referencing the make-believe environmental advocate envisioned by Dr. Seuss. “He was out there on his stump, saying, ‘I speak for the trees!’ and everyone was ‘Oh, John, stop talking,’ but now so many people realize that what he was working for was so important.”

A photo of New is emblazoned on the sign marking the trails bearing his name. Straddling a pair of mud puddles in full canvas-colored outdoor gear with a camera and binoculars around his neck, New his pictured “in his natural habitat,” Nancy said.

Also in attendance was New’s 94-year-old widow, Betty, who was also an avid environmentalist and science teacher. Her face lit up in recognition as she gazed upon her husband’s photo on the trail marker.

The pair met when they were both students at Cornell, Nancy said. Betty was the niece of New’s mentor, Arthur Augustus Allen, who founded the Cornell Lab of Ornithology.

“They both had such a love of birds. That’s what connected them,” Nancy said. “She’s always been his kindred spirit.”

The Susquehanna Chapter of the Adirondack Mountain Club sponsored the dedication of the sign at the Silas Lane trails, which was dedicated last week.

The Greenway welcomes donations for the continued expansion and maintenance of the trail system. For more information, visit oneontagreenway.org or contact Donna Vogler at donna.vogler@oneonta.edu.