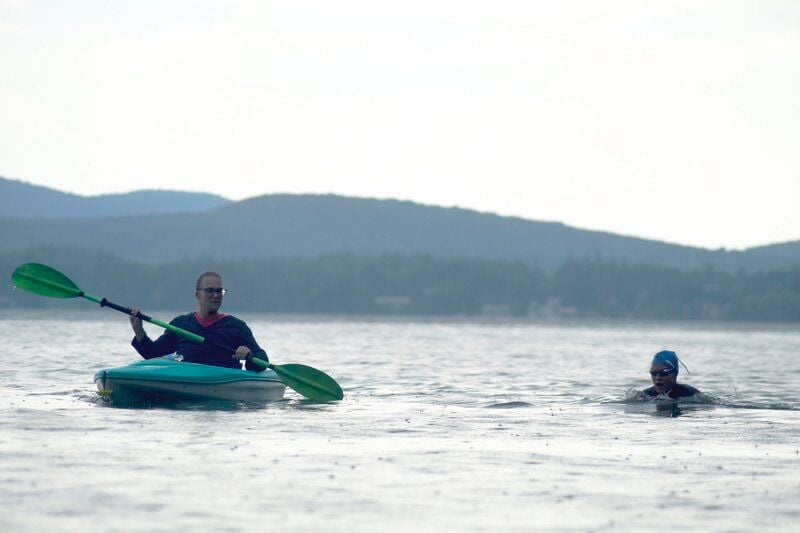 Sarah Eames | The Daily Star Fourteen-year-old Cherry Valley resident Mina Aramini trains Wednesday for an upcoming nine-mile swim across Otsego Lake as her mother, April, looks on from a kayak. 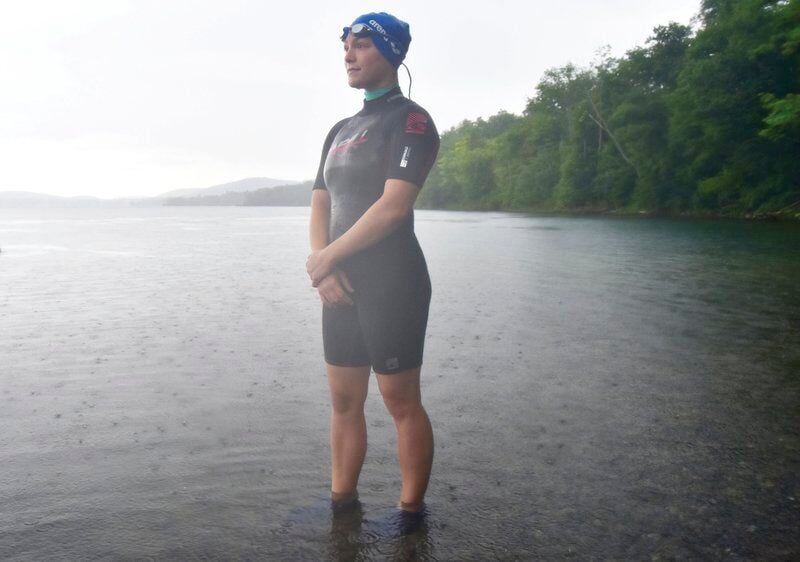 Sarah Eames | The Daily Star Mina Aramini, 14, of Cherry Valley, stands in the shallow water of Otsego Lake after training Wednesday for an upcoming nine-mile swim.

Sarah Eames | The Daily Star Fourteen-year-old Cherry Valley resident Mina Aramini trains Wednesday for an upcoming nine-mile swim across Otsego Lake as her mother, April, looks on from a kayak.

Sarah Eames | The Daily Star Mina Aramini, 14, of Cherry Valley, stands in the shallow water of Otsego Lake after training Wednesday for an upcoming nine-mile swim.

A Cherry Valley teenager is raising funds to benefit a local nonprofit’s work to support the community throughout the coronavirus pandemic.

Fourteen-year-old Mina Aramini is seeking sponsorships for an upcoming swim across the length of Otsego Lake, training three days a week and sometimes on weekends for the nine-mile swim, scheduled for Sunday, Aug. 16.

“My brother swam the lake two years in a row and donated, and I thought it was my turn,” Mina said.

Mina said she selected the Community Foundation of Otsego County to benefit from her fundraising for its ability to donate to other local organizations, citing in particular a recent donation to the Brookwood School, where her mother is employed.

“Mina exemplifies all that is good about our county,” said Harry Levine, chairman of the foundation board. “She cares, she is involved, she is proactive and she is concerned for all those about her with needs — truly encouraging action from a 14-year-old who is mature beyond her age. The Community Foundation of Otsego County is excited to be her partner in this swim and we wish her well.”

The foundation’s 20-plus volunteers have raised and granted out almost $200,000 for COVID-19 relief in the past ninety days across the entire county, according to Levine.

Under the watchful guise of Maddox and their mother, April, who will follow closely in a pair of kayaks, Mina will set off from the public landing docks in Springfield and swim for Lakefront Park in Cooperstown.

“There’s not that many kids that have conquered the lake, but she’s got that drive,” April said.

Mina, who has swam competitively for eight or nine years, said she thought swimming the lake “would be a great challenge.”

“I like swimming distance because it really pushes me to get stronger,” she said.

A longtime swimmer with the Clark Sharks, Mina made the Cooperstown girls’ varsity swim team as an eighth grader. Despite coming from a different school and the age difference between her and her teammates, Mina said she wasn’t at all intimidated because she already knew most of the girls from club swim.

Mina’s signature swim meet events include the 500-meter and 50-meter freestyle races, but her favorite stroke to swim is butterfly. Her nine-mile crossing will be a mix of freestyle and backstroke, in the interest of efficiency, she said.

Undaunted by the length of the swim, Mina said she is most nervous about the seaweed and the fish lurking in it.

“When I first get in the water, my imagination starts to get the best of me,” she said. “Once I’m on top of the water and out of the seaweed, it starts to get easier.”

To donate to the fundraiser, visit bit.ly/swimthelake