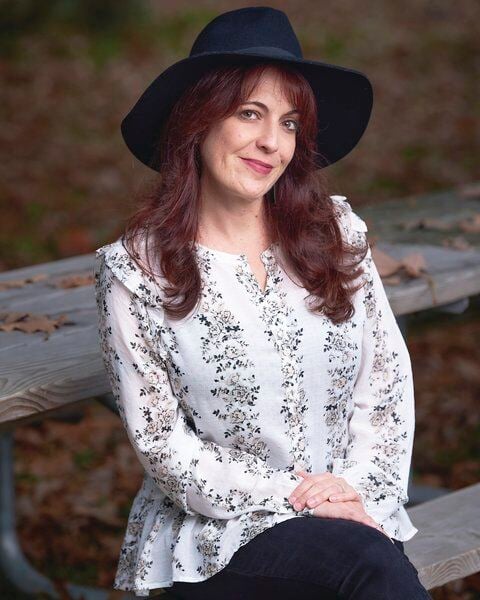 Tara Drouin, Long Island-based singer-songwriter and author of "Red Rock Road," a children's book based on her parents' home in Hobart, is shown in this undated photo. 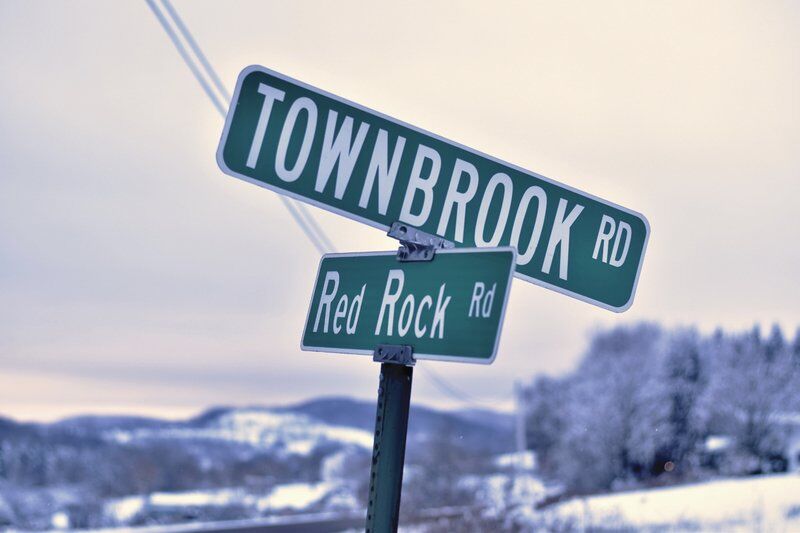 Sarah Eames | The Daily Star The street signs at the corner of the Calloway family home on Red Rock Road in Hobart are shown Wednesday, Jan. 6. 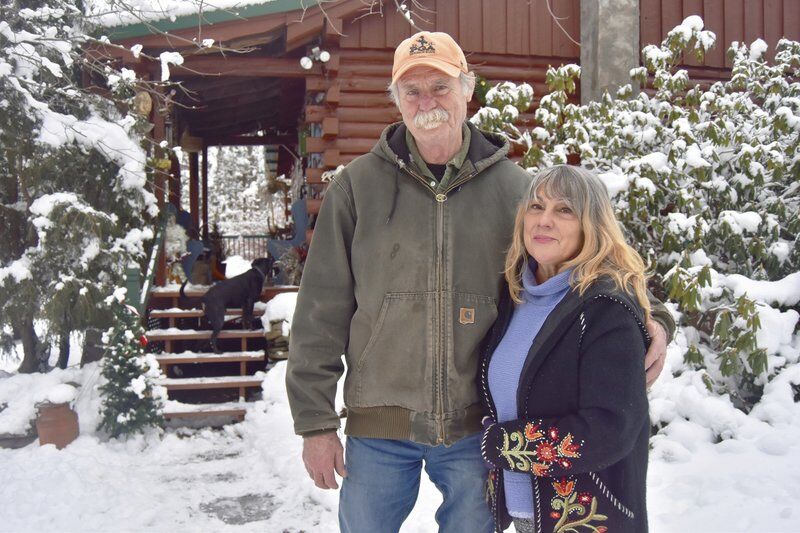 Sarah Eames | The Daily Star Bob and Teri Calloway are shown outside their Hobart home on Red Rock Road, the setting of their daughter Tara Drouin's song and children's book, "Red Rock Road," on Wednesday, Jan. 6. 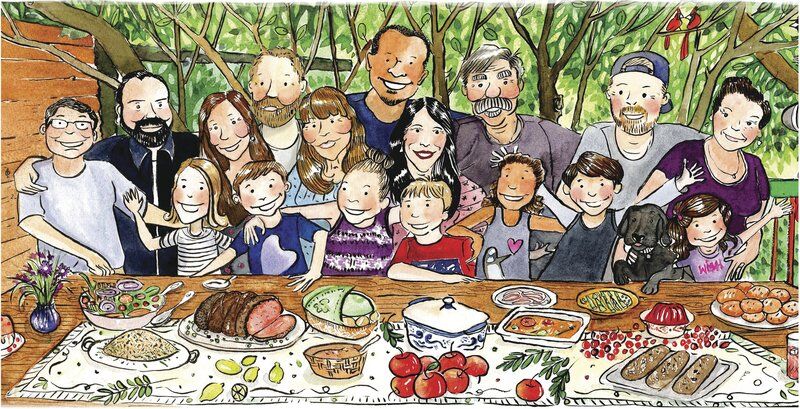 Contributed A portrait by "Red Rock Road" illustrator Soumya Basnet shows the Calloway family sitting around the picnic table behind the house on Red Rock Road. 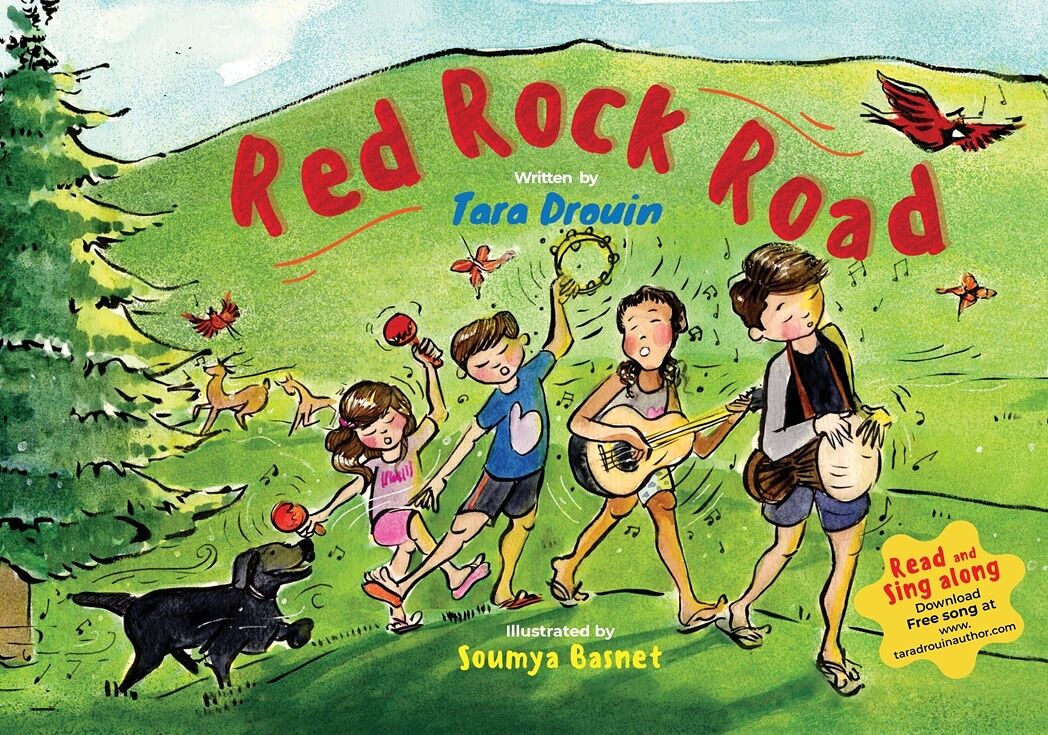 Tara Drouin, Long Island-based singer-songwriter and author of "Red Rock Road," a children's book based on her parents' home in Hobart, is shown in this undated photo.

Sarah Eames | The Daily Star The street signs at the corner of the Calloway family home on Red Rock Road in Hobart are shown Wednesday, Jan. 6.

Sarah Eames | The Daily Star Bob and Teri Calloway are shown outside their Hobart home on Red Rock Road, the setting of their daughter Tara Drouin's song and children's book, "Red Rock Road," on Wednesday, Jan. 6.

Contributed A portrait by "Red Rock Road" illustrator Soumya Basnet shows the Calloway family sitting around the picnic table behind the house on Red Rock Road.

The newest addition to the shelves of the Hobart Book Village features some familiar faces and landscapes.

The self-published book, based on an original song by Drouin with the same title, is named for the Hobart road where her parents have lived for more than 25 years.

Drouin said she wrote the song on a trip upstate.

“The lyrics just came to me,” she said. “I think people upstate will really appreciate it because of how beautiful it is up there.”

“When my family stands on my parents’ land/a special place to be, part of our history,” reads the refrain, accompanied on the pages by illustrations of U.K.-based artist Soumya Basnet of Drouin’s family, based solely on photographs.

Drouin said she found the artist through a Facebook group for children’s illustrators and authors.

“I just loved her illustrations of flowers and animals — they’re so realistic and magical at the same time,” Drouin said. “I knew she would be perfect.”

“It’s a book celebrating the importance of family,” Drouin said. “It’s become a tradition, the things we do — sitting around the fire and singing.”

Drouin recorded the song with her children’s band, the Gum Drops, and surprised her stepfather, Bob Calloway, with the debut performance for his 70th birthday.

“It blew my mind,” Calloway said. “I was amazed. My kids have brought tears to my eyes with a lot of the things they do.”

“My wife is the guiding light for the musical end of the family,” he continued.

Teri Calloway, a retired teacher and former professional singer, saw her children follow in her musical footsteps, Calloway said. “It’s not surprising at all that Tara would come up with a song that evolved from a drive up here.”

The couple, originally from Merrick, Long Island, said they purchased the upstate property in 1994 as a seasonal escape from the crowded New York City area.

“We felt like sardines — we wanted to get away from it,” Teri said. “We’re simple people, children of the ‘60s. This really was a better fit for us. We got tired of keeping up with the Joneses.”

The pair married in 1987, bringing together Bob’s son, Keith, and Teri’s children, Tara and Rick. The following year, their daughter Melissa was born.

“We’re a storybook kind of family,” Bob said. “A lot of times, there’s families that are ‘yours, mine and ours’ that don’t work out so well. Ours has been nothing but wonderful. We’ve embraced one another, supported each other — I love them as my own and they love me. We’ve got a great family, so that lends itself to all the fun we’ve had.”

“Being a musician, the first medium I use is music,” Drouin said. “The lyrics are all the fun things we do at Grandma and Grandpa’s: singing by the fire, swimming in the pool, barbecuing, just having fun together.”

The Calloways said they were drawn to the area for its scenic views, expansive landscape and generous residents.

“The thing that caught us — if you come in on Red Rock Road, the view blows your mind,” Bob said. “When you’re up there, you’re only looking at sky; that’s all you can see. It was love at first sight.”

Bob recalled bringing his father up for a visit from North Carolina. “He stopped his car and said, ‘We’re going off the end of the earth here!”

The road itself is named for the red rock it used to be made of, Bob explained. The road was paved less than a decade ago.

“We have so many things here that are so foreign to Long Island life,” Teri said. “It’s just a fabulous area. Maybe we appreciate it more because we weren’t brought up like this.”

“This was a blank canvas when we came here,” Bob said.

The little log cabin was only two years old when the couple purchased it, Bob said. The sprawling property has since been embellished with trees, a fire pit, a pool and a garden.

“We fell in love with the area. It wasn’t some grand scheme; it just all worked out,” Bob said. “We’re pretty self-reliant and we’re pretty social people. We take risks, and this was a good risk.”

The Calloways, both retired teachers, run a homegrown herbal tea business from a carefully tended garden in their yard and said they spend their free time doting on their eight grandchildren.

“Tara’s book really captured the spirit of our family,” Bob said. “We’ve had a lot of fun doing what we’re doing, and it’s always mixed with music. We’re all part of that.”

Drouin, a school teacher in Port Washington, said her lyrical book lends itself to teaching beginning readers, with its rhythmic repetition and bright illustrations.

“This is what I would love to be doing all the time,” she said. “All this stuff makes me happy. It’s more about fulfillment than monetary gain.”

Drouin said her first book, “One Heart,” also based on a song she wrote, was like “lightning in a bottle.”

Released on Peace Day in 2016, Drouin said she performed the accompanying song on Martin Luther King Jr. Day at the school in Queens where she worked.

“The message is that even though we all look different on the outside, on the inside, we’re all the same,” she said.

The book was illustrated by an art teacher in Bethpage and quickly developed into a diversity workshop, Drouin said. “One Heart” saw a resurgence in popularity among the wave of Black Lives Matter demonstrations that swept the nation this summer.

“It’s such an important topic to be taught in schools,” she said. “The topic is always going to be relevant.”

A third book, “Starlight,” based on a lullaby, is also in the works.

DOVER, Del. - Charlotte V. Battin passed unexpectedly in Dover, Delaware, on Jan. 6, 2021. A brief service was held at Traders Funeral Home, www.traderfh.com. She will be interred in the spring in Rogers Hollow Cemetery, Unadilla.