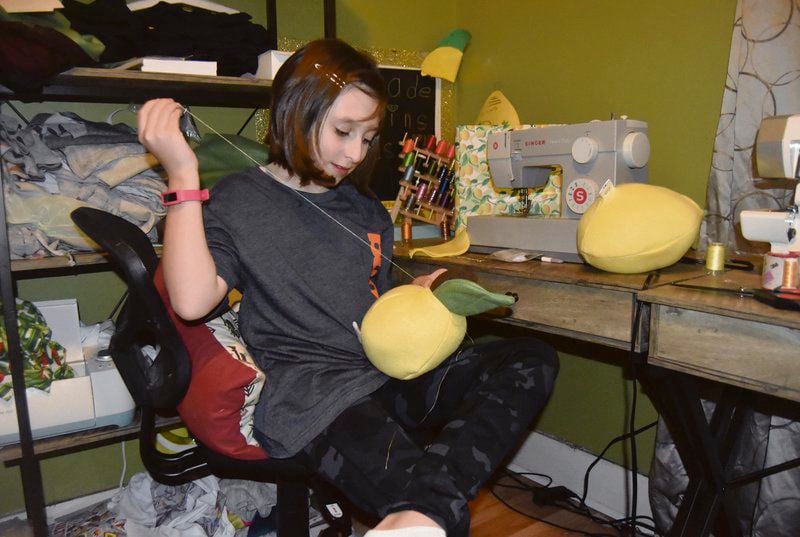 Sarah Eames | The Daily StarNine-year-old Carly Waters, founder of the nonprofit organization Lemon-aids, sews the stem onto a plush lemon in the studio of her family's Esperance home Thursday. 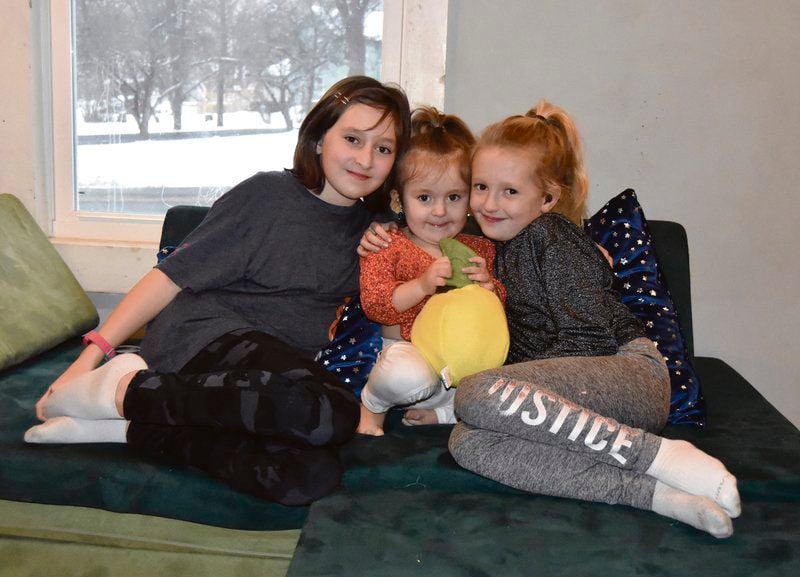 Sarah Eames | The Daily StarNine-year-old Carly Waters, founder of the nonprofit organization Lemon-aids, sews the stem onto a plush lemon in the studio of her family's Esperance home Thursday.

ESPERANCE — When life gives you lemons, give lemons back.

Plush lemons, that is.

Carly Waters, a fourth-grader at Schoharie Central School, became an entrepreneur at the age of 8, sewing together football-sized lemons out of fleece.

In 2018, she founded Lemon-aids, a nonprofit organization that raises funds for families whose children have hearing loss after her two younger sisters were diagnosed with sensorineural hearing loss, a permanent form of hearing loss caused by damage to the inner ear or the nerve from the ear to the brain.

For those with the condition, higher pitched tones may sound muffled and it may be difficult to pick out words against background noise.

Two-year-old Molly was the first to be diagnosed after failing the newborn hearing screening, according to the girls’ mother, Marissa. She was fitted with her first pair of hearing aids at 8 weeks old.

“After that, it was sort of an ‘aha!’ moment for Emma,” who was just starting kindergarten and having trouble hearing in a noisy classroom setting, Marissa said.

“You’re one of the lucky ones,” Marissa said she told Emma, now 7, when she got her first pair of hearing aids. “If you lose those, we can’t afford to replace them.”

“That sparked a lot of conversation,” she said. “Carly just felt she needed to do something.”

“I don’t think it’s fair that most kids can’t afford them,” Carly said.

At first, Carly wanted to start a lemonade stand but was discouraged by the necessary permits, Marissa said. Instead she turned to sewing, a craft she’s known all her life.

“Sewing was always a hobby of mine, and Carly grew up with it,” Marissa said. “She would fall asleep to the sound of a sewing machine.

When Carly was born in 2010, Marissa said she left her job at Albany Medical Center and started a sewing business from home called Little Rock Creations.

Marissa said she learned to sew from her grandmother, 84-year-old Jane MacCormack, whose Singer sewing machine she still uses.

“It’s amazing because sewing is a dying art,” Marissa said.

Carly said she learned to sew first on a pink and purple machine and then by hand.

“At first I just made pillows, but now I can sew anything I put my mind to,” she said.

Having sewn and shipped more than 2,000 lemons worldwide, Carly said making them has become second nature.

Marissa cuts the fabric, Carly sews the lemons on the machine and Emma stuffs them before the stems are sewn on by hand.

The girls appeared on “Good Morning America” in March, where they received a $5,000 donation from the Syracuse-based HearStrong Foundation.

“Through recognition, funding and resources, HearStrong empowers people with hearing loss to inspire change and break down the barriers that prevent others from seeking the care they need,” according to the organization’s mission statement.

HearStrong and Lemon-aids were among seven organizations to be honored last month at the 2019 National Quarterback Club awards dinner and hall of fame induction ceremony in Scottsdale, Arizona, where Bryce Young, Joe Burrow, Drew Bledsoe, Rich Gannon and Bill Shover were recognized.

The family packed more than 100 lemons for their trip to Arizona, where they were live-auctioned at the gala, Marissa said. The girls also signed three footballs, which were auctioned at $6,000 apiece.

In the wake of the Australian wildfires, Carly switched to sewing blankets and wallaby pouches to help the injured animals heal and recover.

Carly said she plans to continue making lemons when she grows up, when she’s not busy with her career as a detective/country singer/fashion designer living in London.

The entire family is self-taught in sign language via YouTube videos, and Emma said she wants to be a sign language teacher or an audiologist when she grows up.

Lemons are $18 apiece and available for purchase at lemonaids.org