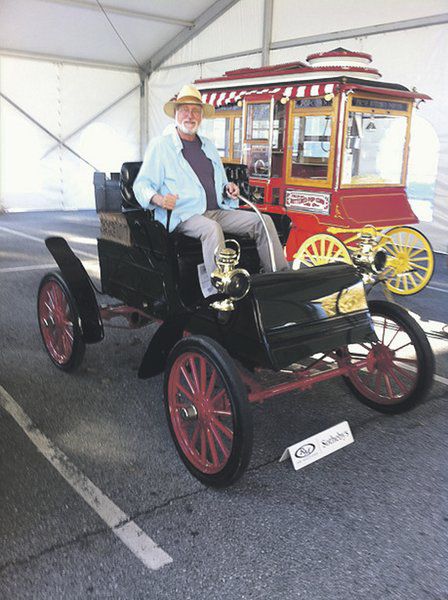 ContributedRobert Selkowitz, organizer of the Catskill Conquest Pilot Rally, is shown on a 1903 Northern in Hershey, Pennsylvania in this undated photo. 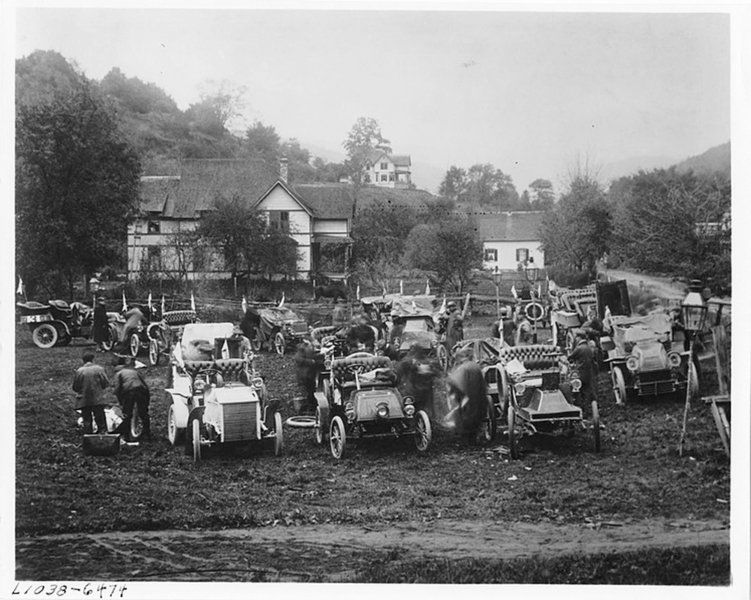 Photo courtesy of the Detroit Public LibraryAutomobiles taking part in the 1903 Endurance Run are shown parked in Pine Hill in this photograph from 1903.

ContributedRobert Selkowitz, organizer of the Catskill Conquest Pilot Rally, is shown on a 1903 Northern in Hershey, Pennsylvania in this undated photo.

Photo courtesy of the Detroit Public LibraryAutomobiles taking part in the 1903 Endurance Run are shown parked in Pine Hill in this photograph from 1903.

Robert Selkowitz is a landscape painter living in the Ulster County town of Olive. He is also a car enthusiast, hobby historian and director of Historic Automobile Endurance Runs, LLC, a company he created to develop an automobile heritage trail in Upstate New York.

The first step toward that goal will occur Saturday. Selkowitz said he has spent the last two years organizing the Catskill Conquest Pilot Rally, a 90-mile ride that begins in Kingston and ends in Unadilla. The event is a commemoration of the historic Endurance Run that made Central New York part of its route in 1903.

The original 1903 Endurance Run was 800 miles. It began in New Jersey, snaked up through the Catskills then southwest to Binghamton, up to Buffalo, going through Ohio and ending in Pittsburgh, Pennsylvania.

This was five years before the Model T was in production. Automakers like Locomobile and Franklin Auto out of Syracuse, companies that wouldn’t survive the Great Depression, made the long journey to prove the reliability of cars over long distances.

“This [rally] was the birth of the experience of automobiling,” Selkowitz said.

The route mapped by Selkowitz will cover 90 miles of the original 800-mile trek. The abridged route begins in Kingston and ends in Unadilla, riding on what is now Route 28, but Selkowitz said people are welcome to do it backwards.

He built the path from present-day roadways and historical maps from 1907 owned by the Delaware County Historical Association, now on display in its museum. According to Selkowitz, parts of the roadway the rally travels on weren’t paved in 1903, and were dirt roads maintained voluntarily by farmers.

“It was called a pilot rally because there were no maps, route names or route numbers,” Selkowitz recounted. “The leading car was filled with big bags of confetti; when they had to turn, they would throw a bunch down on the road so the cars behind them could follow.”

There will be several checkpoints along the way in towns expecting the drivers. The route will take them through Delhi’s Harvest Festival and the Cauliflower Fest in Margaretville.

“My goal is to commemorate the pioneers and their heroic effort in 1903 and to allow all enthusiasts to share in the beauty of the route through the Catskill Mountains,” Selkowitz said.

During his research for the rally Selkowitz found that recreational automobile tourism was an important part of Catskill history. “The Unadilla House has photographs from 1916 when Teddy Roosevelt came to town, and The Unadilla Automobile Club had a big banner behind him in the picture. They’re very excited to be a part of this.”

Drivers can register at both ends of the route, but a pre-trip breakfast at 9 a.m. will be held at Woodstock Harley-Davidson in Kingston. The end of the route is the Unadilla House.

Selkowitz said he intends to hold this event annually, eventually extending it through all the 14 New York counties on the original route.

“The whole idea was to generate travel and to appreciate the landscape and heritage,” Selkowitz added. “What I would like to is to get some of the clubs for the great American automobile brands that had there early cars participate in 1903.”

Registration information for the event can be found at 1903autorun.com

Joseph R. Bellew passed away, at home on Nov. 28, 2021. At the convenience of his family, a Mass of Christian Burial will be April 23, 2022. A full obituary will appear closer to that date.

GRAND GORGE - Douglas Gene Cronk passed away on Wednesday evening, Dec. 1, 2021, at 53 years old. He was born Aug. 28,1968, in Stamford, the son of Gene Cronk and Dee Peters. He leaves behind his father, Gene; brothers, Bob, Jeremy and Gene; sister, Antha; daughters, Katie, Megan and Emily; …