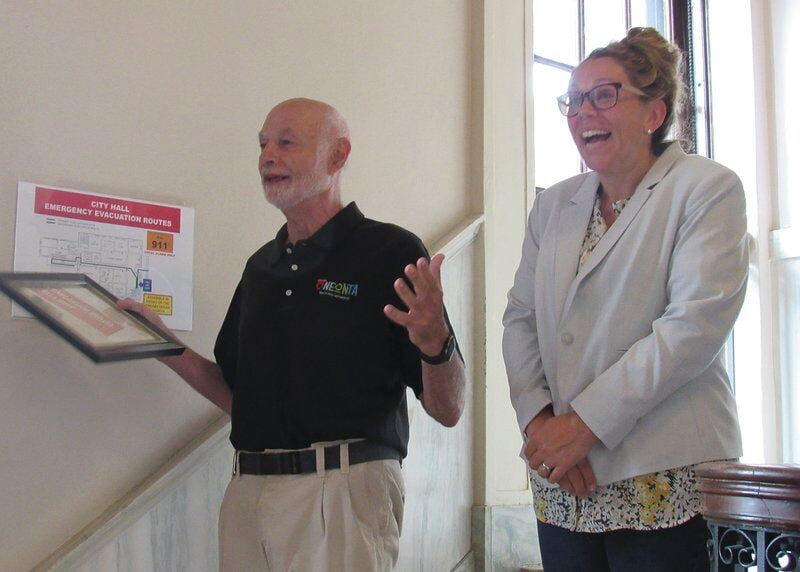 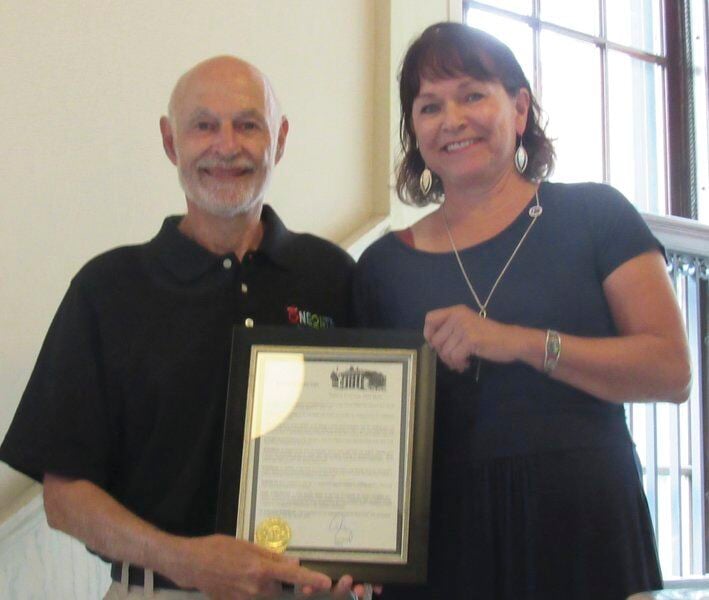 Vicky KlukkertFormer mayor Kim Muller was a recipient of the 2020 Trailblazer Award. She received a proclamation from Mayor Gary Herzig during a ceremony Wednesday night. 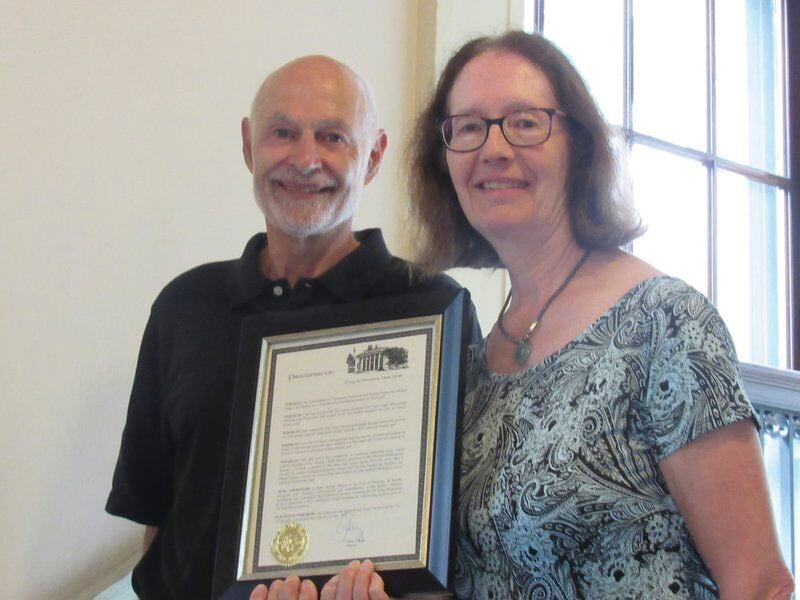 Vicky KlukkertJudge Lucy Bernier receives a proclamation for the 2021 Trailblazer Award from Mayor Gary Herzig during a ceremony at city hall Wednesday. 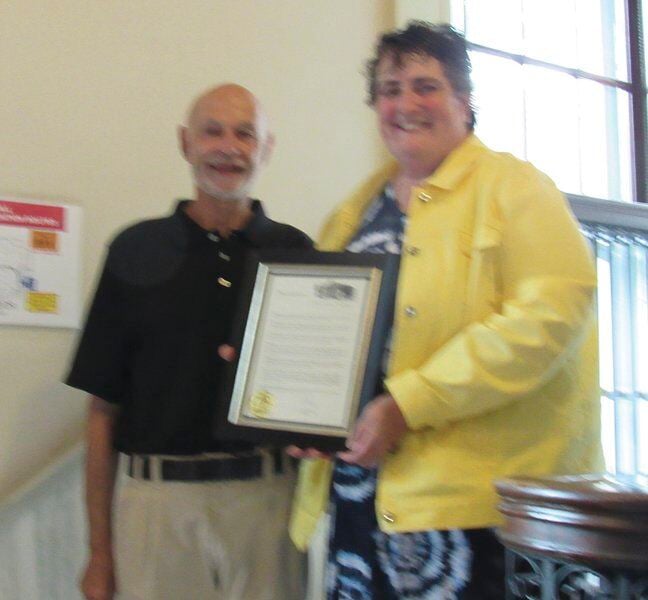 Vicky KlukkertFormer mayor Kim Muller was a recipient of the 2020 Trailblazer Award. She received a proclamation from Mayor Gary Herzig during a ceremony Wednesday night.

Vicky KlukkertJudge Lucy Bernier receives a proclamation for the 2021 Trailblazer Award from Mayor Gary Herzig during a ceremony at city hall Wednesday.

The city of Oneonta's Commission on Community Relations and Human Rights celebrated its 2020 and 2021 Trailblazer Award recipients Wednesday, July 14, at city hall.

The commission selected Susquehanna SPCA's Director Stacie Haynes and former mayor Kim Muller as its 2020 recipients and Cathy Lynch and Lucy Bernier as this year's recipients.

"How great is it to be able to be crammed into this space?" Mayor Gary Herzig asked the crowd in the lobby of city hall. Herzig thanked the members of the commission for spearheading the awards that honor women trailblazers in the city of Oneonta and praised last month's Juneteenth ceremony.

"They do so much and look out for all the people in the city," Herzig said of the commission.

Herzig introduced Haynes and praised her hard work on behalf of animals.

"She created a vision of raising money for a state-of-the-art animal shelter and made it happen," Herzig said. "Our animals are members of the community too. The $5 million shelter is scheduled to open this very week."

Herzig then read a proclamation on behalf of the city stating Haynes has ensured the safety of stray animals and animals that were abused, worked well with the city's police department and animal control officer, that she started Otsego County's Animal Cruelty Task Force and was elected treasurer of the New York State Animal Protection Federation.

Haynes thanked the commission for "this very meaningful honor."

Herzig then introduced former mayor Kim Muller, who was the first female elected mayor in the city.

"Kim Muller is the definition of a trailblazer," Herzig said. "Not only was she the first female mayor, but she prioritized environmental issues and downtown revitalization. This was before being an environmentalist was cool. She spearheaded the recycling effort at the county solid waste facility and wanted to ban plastic bags. She spearheaded the downtown hotel and the plaza that bears her name."

Herzig also said in the proclamation that in recognition of her work at the county with the solid waste facility, Gov. Mario Cuomo appointed her to the state Waste Management Board. The proclamation continued to say that she has served "as a board member of local non-profit organizations, and as chair of the Downtown Revitalization Initiative Downtown Improvement Fund Selection Committee. Kim continues to this day to recruit and support women in seeking elective office and other leadership community positions."

Muller thanked the commission for the honor and talked about her term as mayor and on the county government.

"It's been a few years since I've hollered from these stairs," she said. "A friend of mine asked me what it was like to be a trailblazer. It was a lot of hard work. It took resilience, tenacity, determination and the willingness to take risks. When I was elected to the county legislature, I was 28 and at that time the youngest ever elected and the second woman on the board. I have a degree in geology and a background in environmental issues, but I had to get my message to 12 men. It took time to establish credibility."

She also talked about how the men on the board would caucus in the men's room during break. "I didn't think that was fair, so one time I followed them into the men's room."

She said she hoped she inspired other young women in the city to follow their dreams.

Lynch was hired in 1991 at Oneonta High School and was the first woman social studies teacher the district hired according to the proclamation.

"Cathy exemplifies everything we want in a teacher," Herzig said. "She will do whatever it takes to show young people that they are valued. She goes the extra mile for her students and makes them feel safe."

In addition to being the first woman social studies teacher, Lynch led the alcohol-free after school prom party, was the Students Against Destructive Decisions adviser and helped coordinate the SADD run every year, started the school's Sunshine Committee and volunteered for the annual Pit Run, the proclamation said. In addition, this year she sent Valentine's Day cards to every senior in the district.

"It's hard to top what Kim Muller said," Lynch said. "When I think of the other recipients, Lucy, Kim, Stacie, I don't think I fit in here."

An audience member yelled, "You do."

"I'm overwhelmed," Lynch continued. She said that the superintendent at the time took a chance on her 30 years ago and she thanked him for not only taking a chance on her, but also introducing her to "her family. I'm glad I stayed. The kids and their parents have all become family members."

Bernier was recognized as being the first female "Oneonta City Court Judge, first woman Oneonta City Prosecutor, and as part of the first mother-daughter law firm in Otsego County," the proclamation said. It also said Bernier started the "City Court Internship Program, and served as a law guardian and attorney for children and parents in Family Court and has provided legal assistance at free legal aid clinics and training in domestic violence to town and village justices. She is also, "president of the Catskill Choral Society, president of the Oneonta Professional Women’s Network, a member of the Peace and Justice Needs Network of St. Mary’s Church, the boards of Opportunities for Otsego and Oneonta Dollars for Scholars, the Otsego County Council on Child Abuse and Neglect and the AGREE Mediation Center Advisory Committee," according to the proclamation.

"We all know Lucy as Judge Lucy," Herzig said. "She always does what's right for the city and for the litigant."

Bernier said she was blessed to have the support of her family and she rules from the bench fairly.

"I believe in leveling the playing field," Bernier said. "No matter who they are, what race, religion or gender they are, I try to judge fairly. I hope for good results for the city and the person. If you forget about their humanity you treat them like a machine and I don't want to do that."

The ceremony closed with a reception.