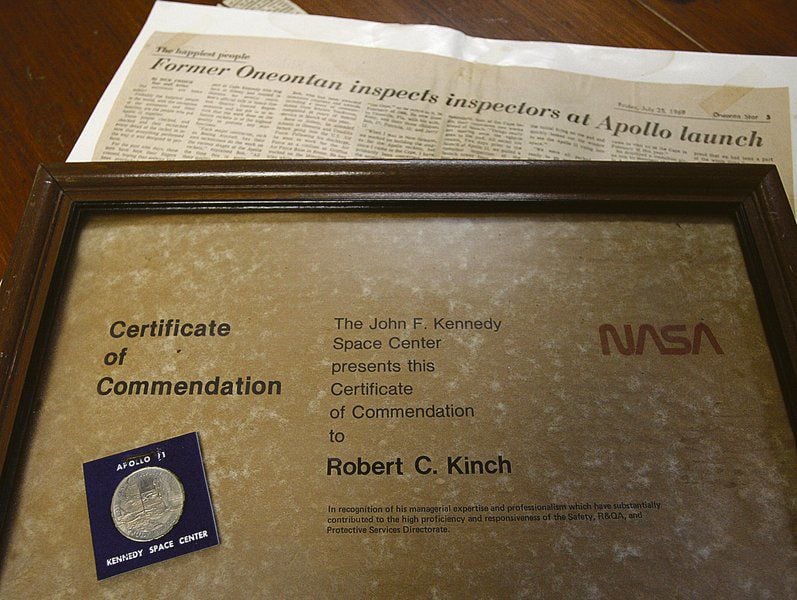 Julie Lewis | The Daily Star Memorabilia from the late Robert Kinch of Oneonta, provided by his nephew, Rob Harder III of Unadilla, includes a a medallion made of metals from the Apollo 11 space crafts Columbia and Eagle, a certificate of commendation from NASA, and a newspaper clipping detailing his involvement with the space program, from the July 25, 1969 edition of The Oneonta Star. 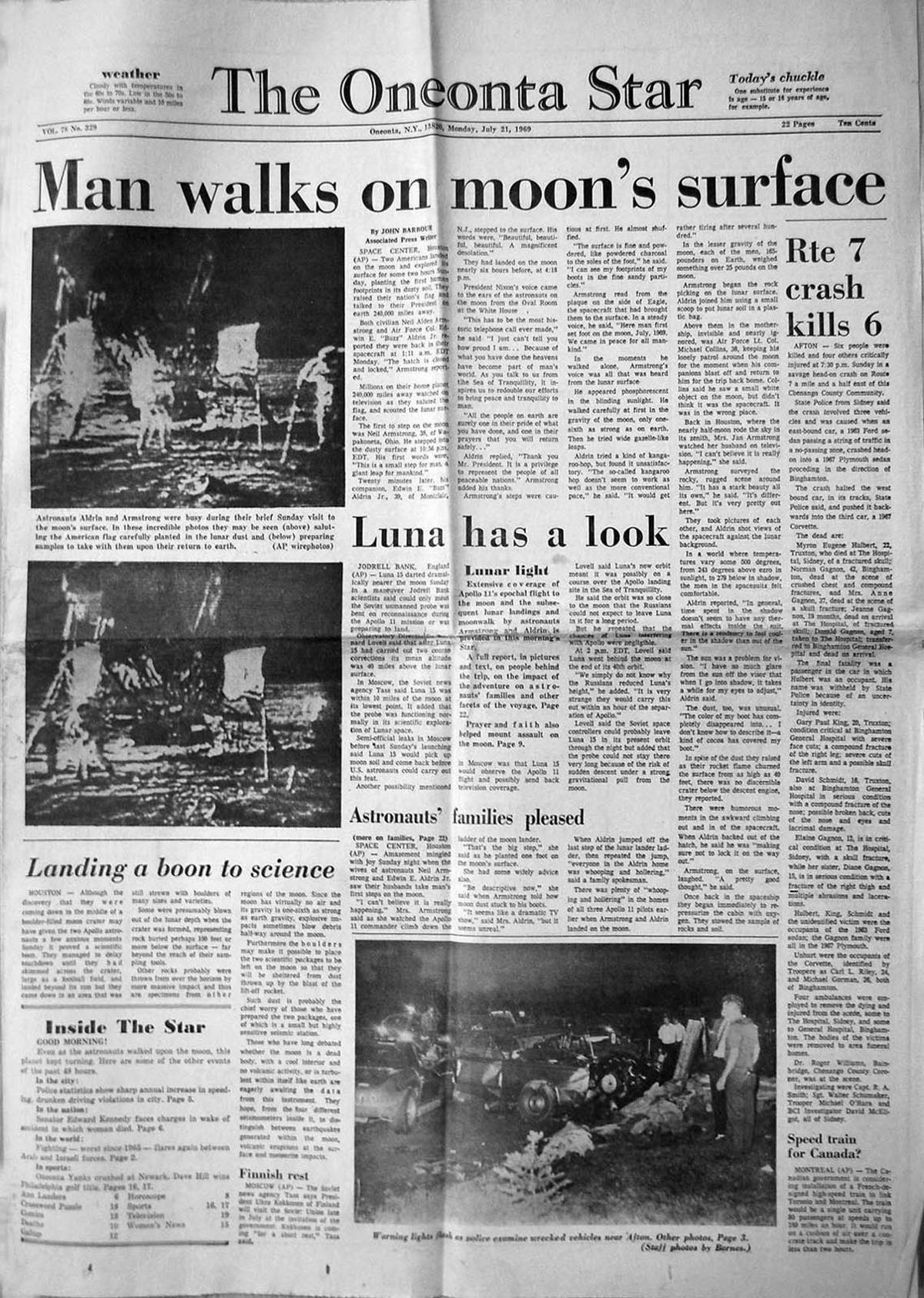 Julie Lewis | The Daily Star Memorabilia from the late Robert Kinch of Oneonta, provided by his nephew, Rob Harder III of Unadilla, includes a a medallion made of metals from the Apollo 11 space crafts Columbia and Eagle, a certificate of commendation from NASA, and a newspaper clipping detailing his involvement with the space program, from the July 25, 1969 edition of The Oneonta Star.

It was as if local life had been put on a pause button 50 years ago this week.

Americans watched the first landing and walk on the moon’s surface by the Apollo 11 crew. Our region was no exception, and it was important to us because some of our local people and companies were involved with this historic space mission.

The moon landing certainly qualified as yet another one of those events you remembered where you were, or what you were doing. Around Oneonta it was a typical warm, humid day in July, and no matter what people were doing, they stopped to crowd around a television set or listen to the event on the radio.

On a late Sunday afternoon, July 20, Apollo 11 crew members Neil Armstrong and Edwin “Buzz” Aldrin safely landed their lunar module on the moon’s surface, as Michael Collins continued to circle the moon piloting the command module. As reporting staff of The Oneonta Star were out checking people's reactions to the event, they noticed there were many sitting on the edge of their chairs, and some holding their breath. Later that same night, the world watched in awe as Armstrong and Aldrin walked on the moon’s surface. Everyone could stay up late if they wanted to, because President Nixon had declared Monday a national holiday.

A junior high school science teacher in Sidney in 1969, Jarvis Wade, said the whole event was, “Absolutely fantastic. Some 18 years ago, I was telling my seventh graders that someday we would be putting a man on the moon, and now it’s done.” Bernie Ford of Bainbridge likened the landing to watching Columbus arrive in America. “One thing that I find fantastic is how close Jules Verne, many years ago, came to predicting the exact details of such a moon landing,” Ford said.

Opinions varied on the worthiness of such a space mission. Leroy Gardner of Oneonta thought there was a lot to be found out on the moon, and hoped the mission would be successful because, “We have to stay ahead of the Russians.” One objective of the moon landing was to prove the U.S. superiority in technology over Russia, as the two nations were still embroiled in the Cold War. Meanwhile, Jim Fraley, a math professor at the State University College at Oneonta thought the money should be invested elsewhere. “We need to direct this money to the problems in the cities, such as better housing and education,” he said.

Several regional companies supplied the technology for this historic mission. Singer-Link of Binghamton provided the flight simulators, which the astronauts used for practice. IBM of Endicott and Owego had computer equipment on the Apollo missions. General Laboratory Associates of Norwich, a subsidiary of Simmonds Precision, provided a tiny component that helped cause a meticulously planned explosion that separated a few of the stages of the Saturn V rocket shortly after the blastoff from what was then called Cape Kennedy.

Some local people were directly involved in the Apollo 11 mission, as well as other space flights. Robert Kinch of Oneonta was a quality control expert at Cape Kennedy. Essentially his job was to insure that the work done on Saturn rockets was of the highest quality to prevent any malfunctions. George Low of Oneonta was a manager of the Apollo program. Navy Lt. Harlan Mellott of Oneonta was on the U.S.S. Hornet at the “splashdown” site, to pick up the three moon travelers.

Days after the moon landing, a Hartwick College professor raised some eyebrows in Washington, D.C., with a painting he had created several years earlier.

“Presently in Washington, D.C., attending the national convention of the International Platform Association, Schelbe showed members, several of whom are senators and congressmen, color photographs of his painting ‘First Man on the Moon,’ painted in 1963.

“The picture depicts two space vehicles on the moon’s surface. Schelbe’s interpretation of the first visit to the moon proved to be amazingly accurate when, earlier this week, both the USA’s Eagle and Russia’s unmanned craft were on the moon for the same time for several hours.

“Schelbe reports the photos of his paintings are now all but exhausted and one Senator has taken an extra copy to present to President Nixon.”

Local residents who hadn’t satisfied their hunger for knowledge about the moon landing and the space program were in for a treat, as The Star reported that NASA was bringing a two-day Spacemobile program to SUNY Oneonta on July 29 and 30.

“Highlighting the program will be an address, open to the public, by NASA representative Francis McCarthy … in the Science Building No. 1 Auditorium, reviewing the history of rocketry, the U.S. space program and the recent Apollo man-on-the-moon project.” The visit was coordinated by Dr. Philo Watson of the SUNY Oneonta Science faculty.

With a man on the moon achieved, many were thinking about what was next on the agenda for space exploration. Some had lofty goals in mind, such as going to Mars or Venus.

It was the opinion at the time of Dr. John F. Maier, an associate professor of astronomy at SUNY Oneonta, that human, distance and time hurdles needed to be cleared before taking on such goals.

“‘An unmanned probe is expendable and can take a year or two to get to a planet, but astronauts would have to take along many other items, such as immense quantities of food, in order to survive for such a long period of time in space,’ he explained. ‘What the scientists are now faced with is the development of rockets capable of boosting such large payloads into space.’

“‘I think the next thing beyond exploration of the moon will be a soft landing on Mars by an unmanned space vehicle to carry out much of the preliminary work as we did on the moon, before the first manned landing,’ he predicted.”

Maier’s prediction came true during the 1970s. There has been increasing talk in recent years of an American manned mission to Mars in the next decade or two.

• Five moon-landing innovations that changed life on Earth. Page A8

ONEONTA - C. Richard "Dick" Pindar, 90, of Oneonta, passed away on Jan. 22, 2020, at Cooperstown Center Rehabilitation and Nursing Facility. Dick had been residing at Heritage at the Plains at Parish Homestead for the past two years. He was born on Sept. 6, 1929, in Harrisburg, Pennsylvania,…