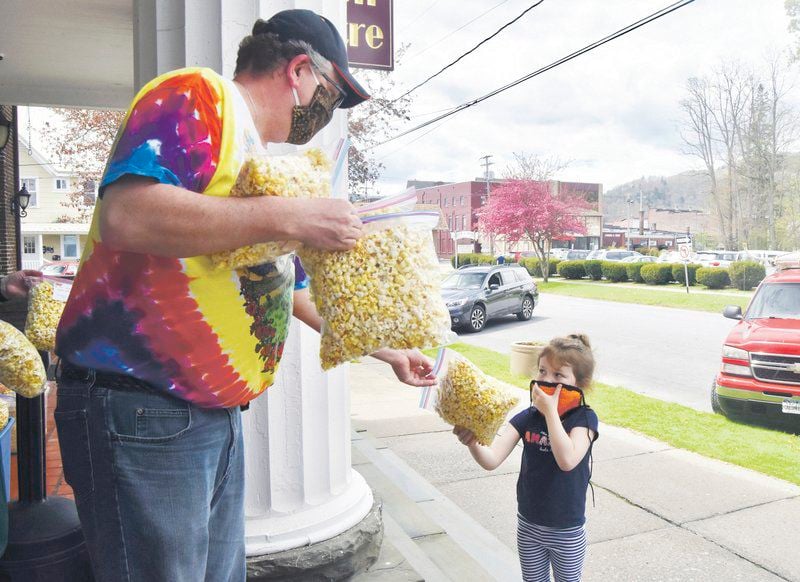 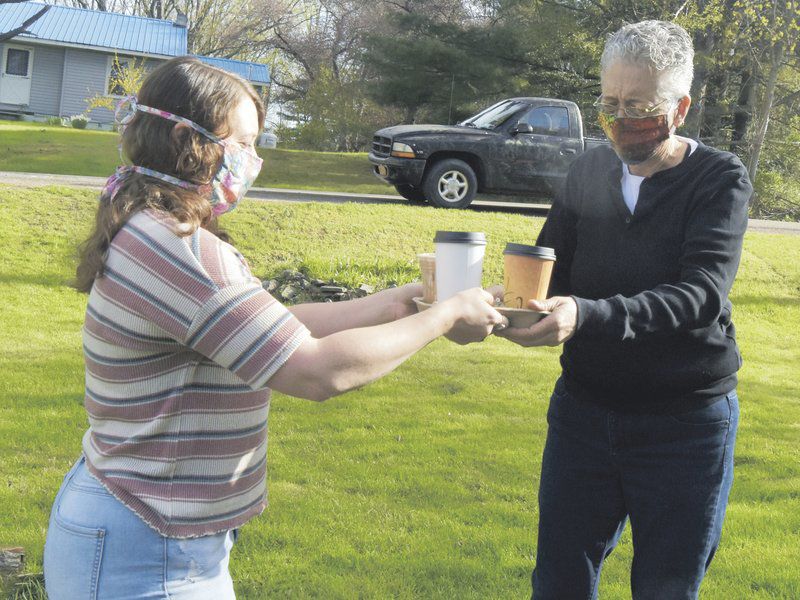 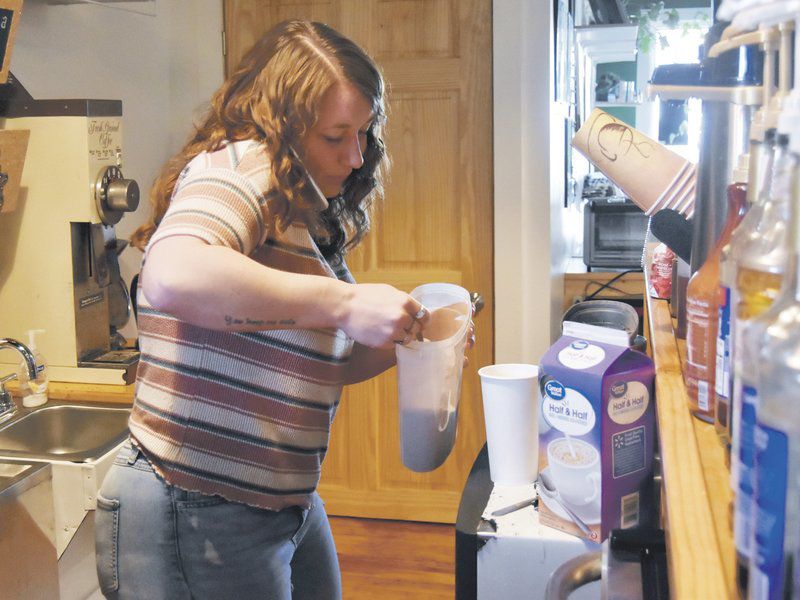 Sarah Eames | The Daily StarAlexis VanBuren, owner of Baristacrats Coffee Bar in Afton, prepares hot beverages for a to-go order Thursday morning while on the phone taking another order.

Sarah Eames | The Daily StarAlexis VanBuren, owner of Baristacrats Coffee Bar in Afton, prepares hot beverages for a to-go order Thursday morning while on the phone taking another order.

With several state-imposed restrictions in place amid the coronavirus pandemic, many local business owners have adapted their business models in an effort to stay afloat.

“I didn’t think business would be steady, but all my customers are still working,” said Alexis VanBuren, owner and sole employee of Baristacrats Coffee Bar in Afton. “I’m busier now than I was before because I’m running in and out, bringing change and making deliveries. I have to go to the store more when I run out of supplies, and you can’t find everything at one store anymore.”

When the state prohibited in-person dining at restaurants and cafes in March, VanBuren said shifting to a delivery-based business model seemed like a natural response.

“It came like an instinct because you always have to be thinking of new ways to make money,” she said. “You have to keep your customers excited about your coffee shop.”

VanBuren and her coffee shop are known throughout Afton and the surrounding communities for the weekly events and gatherings hosted there, including mother-daughter craft nights, support groups and a knitting club.

She said she started the business with her mother, Cynthia Burnett, in October 2018.

“We always wanted somewhere in Afton for people to be able to express themselves through music and art,” VanBuren said. “It’s about human connection and friendship. We need life back in Afton.”

VanBuren doesn’t charge extra for deliveries, offering the service instead as a courtesy to her customers.

“I love my coffee shop and I love my customers,” she said. “The thing I miss most is listening to them and talking with them.”

VanBuren said she makes two to three deliveries a day but serves an average of 20 to 40 people — the rough equivalent of her usual crowd before the pandemic — with curbside pickup.

“This is going to go on a lot longer than we planned for,” she said. “Everyone is still going with the hope that things are going to clear up, but we’re going day by day.”

VanBuren said she is considering installing a walk-up service window on the sidewalk-side of the building to serve her customers more efficiently, even after the immediate danger of the virus has subsided, and is hoping to return to a relative normal by fall, the busiest season at the coffee shop.

“I think there’s a nostalgia around that time of year,” she said.

VanBuren said she applied for a small loan through her bank and was redirected to a lending service, but “never heard anything back.”

“They say they want to help small businesses — that’s what’s so important — but I haven’t gotten any help and I don’t know anyone that has,” she said. “I have to be optimistic about it though. I can’t be pessimistic — it’s scary.”

“Please enjoy this popcorn to go with your home movie,” the gallon-size bags read.

“We wanted to do something for the community because they’ve supported us for so many years,” said program coordinator Chris Howland. “The Walton Theatre is a big part of this village.”

Throughout the pandemic, the theater has maintained its role as a venue for community socialization, even if just in passing and from a six-foot distance.

“Because of the quarantine, some people haven’t been out, so this is their chance to see their friends and other people,” Howland said. “It’s kind of nice to see somebody physically instead of on a screen.”

In partnership with Music on the Delaware, the theater’s live shows have transitioned to a virtual platform, with patrons invited to join the “Zoom Room” for a “virtual house party,” featuring performances by local artists such as jazz pianist John Colonna, banjo player Bill Seneschal and flutist Linda Hickman.

The next virtual house party, featuring Ira McIntosh, will be held at 7 p.m. Thursday, May 21.

The theater also hosts a Film Artist Talk series, which has featured filmmaker Christian Ingvordsen of Bovina Center and David France, a filmmaker, author and investigative journalist from Margaretville.

“Those have been pretty successful,” Howland said.

All of the theater’s employees have remained on the payroll, Howland said, and have been busy conducting a “deep cleaning” of the theater during its closure.

“It’s all the little things we wouldn’t normally have time to get to,” he said.

Howland said he hopes to continue the popcorn giveaways throughout the coming weeks. The entertainment industry was assigned to the final of the state’s four* phases for reopening, he said, “so we’ve got a while to go.”

Distributing popcorn and hosting virtual live shows doesn’t bring the theater any revenue, but Howland said the work is worth it to give back to the community.

“This is just to say thank you, we haven’t forgotten about you guys, and hopefully down the road, we will be open again,” he said.

The Daily Star's four-county region of Chenango, Delaware, Otsego and Schoharie counties has had 300 confirmed cases of COVID-19 as of 7:15 p.…