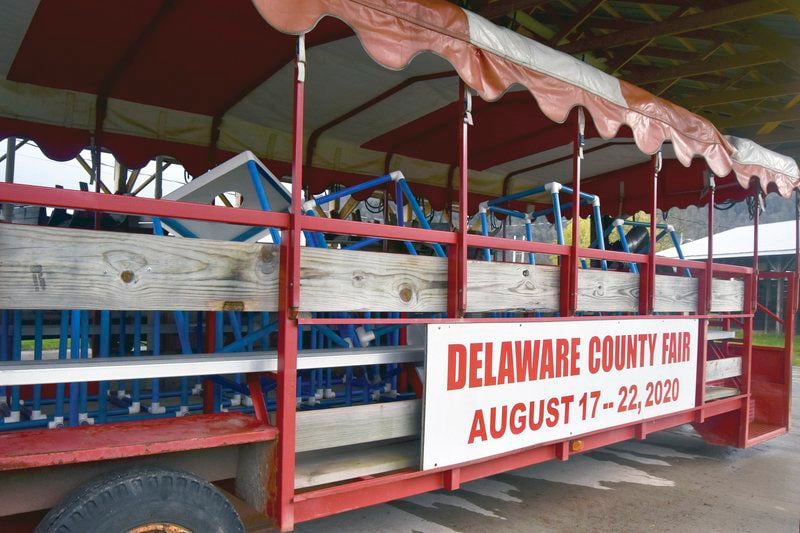 Sarah Eames | The Daily Star A wagon advertising the 2020 dates of the Delaware County Fair sits in storage Monday at the fairgrounds in Walton, holding wooden benches and frames for trash bins. 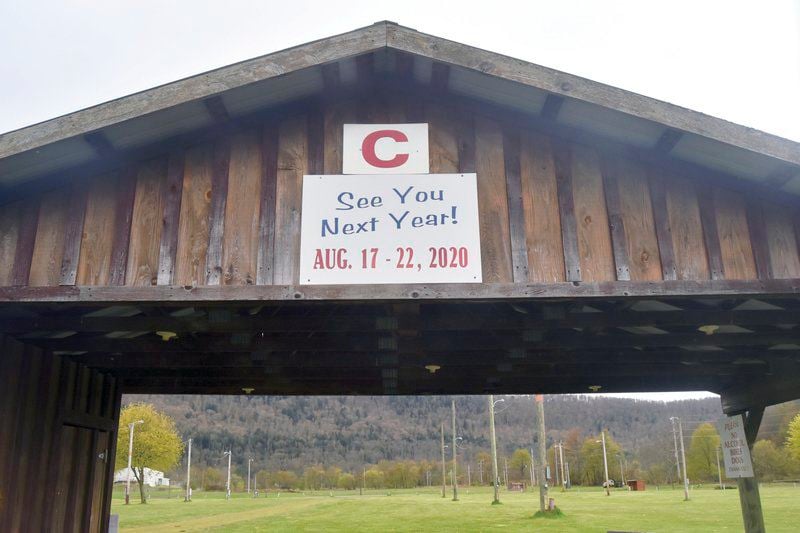 Sarah Eames | The Daily Star A sign posted at one of the three exits at the Delaware County Fairgrounds in Walton invites visitors to return for the 2020 fair, which may not be held because of the coronavirus pandemic.

Sarah Eames | The Daily Star A wagon advertising the 2020 dates of the Delaware County Fair sits in storage Monday at the fairgrounds in Walton, holding wooden benches and frames for trash bins.

Sarah Eames | The Daily Star A sign posted at one of the three exits at the Delaware County Fairgrounds in Walton invites visitors to return for the 2020 fair, which may not be held because of the coronavirus pandemic.

As the first of New York’s 10 regions prepare for the first phase of reopening under Gov. Andrew Cuomo’s New York on PAUSE executive order, plans remain uncertain for many of the state’s dozens of county fairs.

Organizers of the Otsego and Delaware county fairs said they are awaiting guidance from the state, and will likely follow the lead of the New York State Fair, now entering its 179th year.

At an April 28 press briefing in Syracuse, Cuomo warned that the state fair, scheduled to take place Aug. 21 through Sept. 7, could be canceled if the entire state and its surrounding regions aren’t ready to open.

“We agree with the governor that the safety of the public comes first,” New York State Fair Director Troy Waffner said in an April 29 social media address. “We will continue to make preparations with the health and safety of the fair-goer in mind, and in coordination with New York state’s regional efforts to combat the coronavirus. We know that many people want to carry on the tradition of the fair, as do we, but we cannot put a price on the health and safety of those who attend.”

“We are one of the very few still hanging on,” said Lisa Jones, manager of the Otsego County Fair. “We are going to hold on until the last minute.”

Fairs in Saratoga and Lewis counties, the latter of which is entering what would have been its bicentennial year, were cancelled last week amid concerns of the coronavirus pandemic.

If the remaining county fairs go on as scheduled, the New York State Association of Fairs is predicting as much as a 20 to 40% drop in attendance amid coronavirus concerns, Jones said.

“On the other hand, people have been cooped up for months, their vacations have been canceled, they’re home with their kids — we could see attendance actually go up,” she said. “By the time August comes around, I think people will be tired of being at home.”

Billed as “the best six days of summer,” the Otsego County Fair is scheduled to take place Aug. 4 through 9 at the fairgrounds in Morris.

Officials from Gillette Shows, the Massachusetts-based company contracted to supply to Otsego fair’s midway rides and games, said they’re “hoping to be on the road by June,” Jones said, and contracts are still coming in for food and other vendors.

The fair’s executive board is already considering plans for an adapted fair, including spaced seating in the grandstand, distributing masks to patrons and installing extra hand-washing and sanitizing stations throughout the fairgrounds, Jones said.

“We’re going to do absolutely everything on our part to make sure everything is as safe and as sanitary as possible,” Jones said.

Should the fair be canceled altogether, Jones said organizers plan to funnel the extra resources into promoting other seasonal events held at the fairgrounds, including the Holiday of Lights drive-thru exhibit and possibly a haunted house.

Ed Rossley, president of the Delaware County Fair, said the executive board is “still planning.”

“We’re waiting to hear from the governor, and so far, nobody has heard anything,” he said.

The 134th Delaware County Fair is scheduled to take place Aug. 17 through 22 at the fairgrounds in Walton.

The operations of each county fair are subject to state regulations and permits, said Rossley, who also serves as vice president of the New York State Association of Fairs.

All of the Delaware County Fair’s contracts have been in place since February, Rossley said. Officials from Dreamland Amusements, the Nevada-based midway contractor, said they plan to implement extra sanitizing protocols for rides and games.

If the Delaware County Fair goes on as scheduled, Rossley said it’s “hard to say” how many will attend.

“If there’s a fair, I think it’ll be a good one because people are going to want to be out and going,” he said. “We’re just hoping things open up so we can put on a safe and fun fair.”

The Daily Star's four-county region of Chenango, Delaware, Otsego and Schoharie counties has had 310 confirmed cases of COVID-19 as of 8 a.m. May 29.