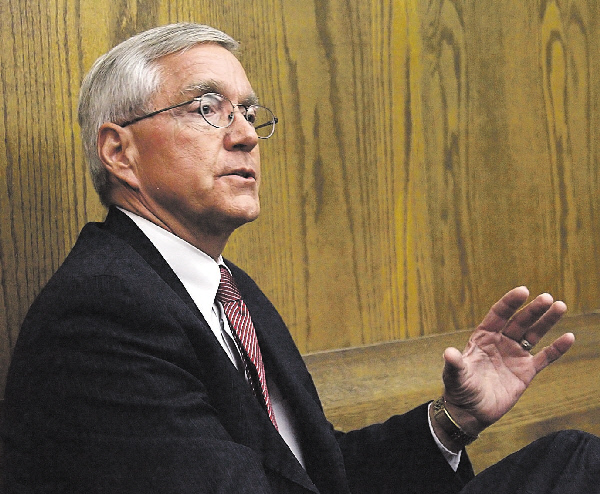 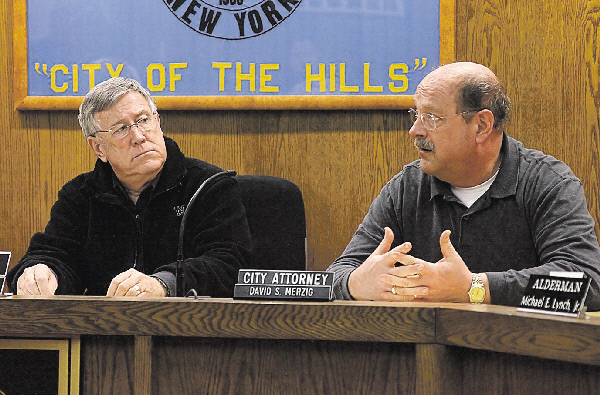 ONEONTA _ An independent review of a police brutality allegation, as well as the Oneonta Police Department's handling of the complaint, is under way.

A retired head of the state police internal affairs bureau met Tuesday with City Hall staff and made a cameo appearance at an emergency Common Council meeting. Aldermen voted unanimously to authorize the review by Joseph Loszynski, under the supervision of Mayor Dick Miller.

Officer Michael Breen declined to comment to The Daily Star on Tuesday about the allegation he punched a man several times after a traffic stop. But Breen sent an e-mail to all eight aldermen and the mayor suggesting he was being targeted for an anonymous sexual harassment complaint earlier this year against Police Chief Joseph Redmond.

Bradford Shanks, 39, told The Daily Star last week that after a traffic stop on Market Street on Jan. 28, he was put in a headlock by Breen and then punched. Shanks said the alleged beating occurred after he fled on foot to find a sergeant at the nearby police station to resolve a disputed license suspension.

"Based on what (Loszynski) finds, he may recommend that a broader review would be appropriate," Miller said.

One alderman questioned if it would be enough. An original statement from Miller referred to Loszynski's review as being "broad in nature with the January 28 incident as a starting point."

"I think we are starting to limit what was supposed to be a broad review," Lynch said during a discussion on the scope of the review and how aldermen would provide input.

But after the meeting, both Miller and Loszynski said the review will be comprehensive.

The mayor said the examination of the department's internal policies as they relate to the Jan. 28 incident would be relevant to allegations of police misconduct in 2009. Those allegations, which led to the resignation of three officers, included incidents of on-duty drinking and sex, along with allowing a drunk woman to drive a police car.

"I would say, however, that issues related to stage 1 or 2 are consistent with the issues going back to the summer and fall of 2009," Miller said.

Loszynski said the focal point of his review will be the Jan. 28 arrest of Shanks and his review will include the actions of on-scene supervisors, as well as the leadership of the department. The result will be "a full assessment of how that matter was handled," he said.

His probe would also go beyond the Jan. 28 incident, he said, when asked by The Daily Star if he would be looking at previous incidents involving Breen.

"I will review all personnel records pertaining to anybody there is an allegation of misconduct against," said Loszynski, who retired from the state police in 2007 after a 33-year career.

Loszynski said that based on his review, he will make a determination on whether or not the internal investigation into the Jan. 28 incident conducted by the police department was adequate. If not, he will make a recommendation about further investigative leads the city should pursue to get to a conclusion.

"I feel the next couple of days are going to involve a tremendous amount of document review," Loszynski said.

If there needs to be a broader review it would involve a larger commitment of resources, he said.

"I certainly cannot do this effort by myself," Loszynski said.

The council authorized paying Loszynski $450 per day plus expenses. The total amount of his services is not to exceed $10,000, with the funding coming from the city's general fund.

"He's been given no limit as to how quickly this has to be done," Miller said.

Second Ward Alderman Paul Robinson said the council could revisit the $10,000 ceiling in the event more funding is needed.

"It would probably be forthcoming because we want a thorough investigation," said Robinson, chairman of the Finance/Administration Committee.

Loszynski, 61, said his initial work, which began Tuesday morning, involves familiarizing himself with the city's protocols and procedures.

"Basically, the day was establishing relationships with city officials with whom I will be working," he said.

It was not known if he would draft a final, public report, according to Loszynski.

"That hasn't been determined yet," Loszynski said.

Under the resolution passed by the Common Council, Loszynski was charged with the authority of the Common Council to act on its behalf during the investigation. Miller said that, in accordance with the city charter, he had delegated his authority as mayor to conduct the review to Loszynski. That authority includes access to books and records of any city employee as well as the ability to compel testimony from any city employee or officer.

Citing the police union contract and civil service law, Miller said he was not sure what form the final product of Loszynski's review will take but said the entire process was being done in the interest of transparency.

"We will share as much of it as can be shared," Miller said.

He said he will meet with Loszynski on Friday to evaluate his progress.

Detective Brandon Collison, president of the city police union, said he would not comment on the incident or the union's reaction to it while the investigation was ongoing.

"We have a meeting today, and I'm going to discuss it with the officers," Collison said.

Breen, who does not have a listed phone number, did not return an e-mail for comment.

Collison said he spoke with Breen, who is on paid, administrative leave, but did not disclose what the two discussed. Collison said he relayed a message to Breen from The Daily Star requesting comment, but the officer declined.

Breen sent an e-mail Tuesday afternoon to aldermen, the mayor and Collison.

"This e-mail is to notify you that I believe that I am the target of retaliation by Chief Joseph Redmond, and possibly others, as a result of an anonymous complaint of sexual misconduct concerning Chief Joseph Redmond towards female employees of the Oneonta Police Department and possibly elsewhere," he wrote in the e-mail. "I am also writing to request that my ban from all city property be amended so that I can obtain documents and file paperwork on my own behalf with regards to my defense of any allegations brought against me."

That anonymous complaint, mailed in November to each member of the Common Council, including the mayor, alleged Redmond inappropriately touched female officers and made suggestive comments in the workplace.

"That matter was fully investigated using the city's policies and procedures and was found to be an allegation that was without foundation and (Redmond) was exhonerated," Miller said during open session of Tuesday's meeting.

Personnel Director Kathy Wolverton led that investigation, which included interviews with members of the department.

Redmond, who was at the emergency council meeting, said he had no comment on the anonymous complaint.