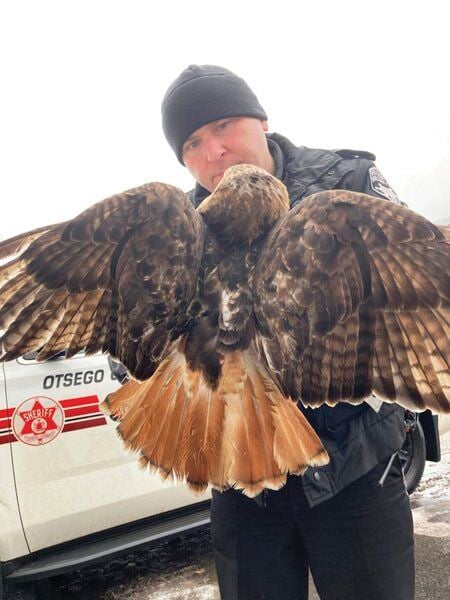 ContributedSgt. Michael Stalter of the Otsego County Sheriff's Department, shows off the wingspan of Lucky, an adult male red-tailed hawk rescued from Interstate 88 in Oneonta on Tuesday, Feb. 16. 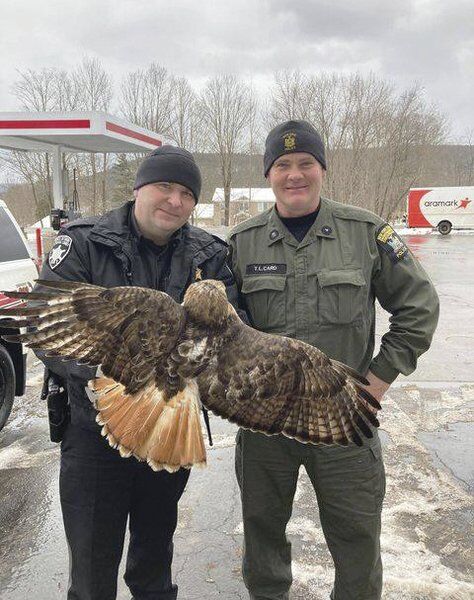 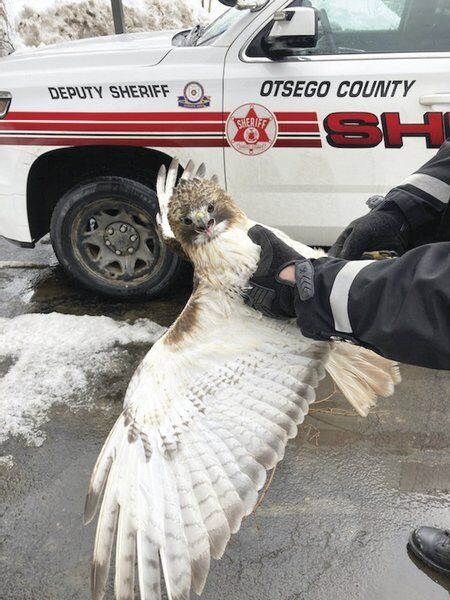 Contributed Lucky, the adult male red-tailed hawk rescued after being struck by an SUV on Interstate 88 in Oneonta on Tuesday, Feb. 17, is shown in this contributed photo.

ContributedSgt. Michael Stalter of the Otsego County Sheriff's Department, shows off the wingspan of Lucky, an adult male red-tailed hawk rescued from Interstate 88 in Oneonta on Tuesday, Feb. 16.

Contributed Lucky, the adult male red-tailed hawk rescued after being struck by an SUV on Interstate 88 in Oneonta on Tuesday, Feb. 17, is shown in this contributed photo.

An adult male red-tailed hawk, nicknamed “Lucky” by one of his rescuers, is expected to make a full recovery after he was struck by a passing SUV on Interstate 88 in Oneonta on Tuesday, Feb. 16.

“You’re in the right place at the right time for the right reason,” said Goodyear Lake resident Maureen Richter, who rescued the hawk from the roadside. “It was just one of those things.”

Richter said she was on her way to run an errand on Oneonta’s Southside when she witnessed the bird swoop into the path of oncoming traffic.

“Every time another car whooshed past, the poor little thing kept getting blown all over the road,” she said. “He must have been terrified.”

Surprised to see that the bird had survived the impact, Richter said she quickly pulled over and called 911.

“I don’t know if you consider this an emergency,” Richter said she told the operator as she described the situation.

While waiting for police to arrive, Richter said she grabbed a Christmas sweater she keeps in her car for emergencies and set out across the highway to remove the bird to safety.

“My husband called while I was trying to cross the road,” she said. “I told him, ‘I can’t talk to you right now. I’m a little busy.’”

First to the scene was Deputy Frank Koren Jr. with the Otsego County Sheriff’s Department, who was passing through the area and pulled over to assist what he thought was a disabled vehicle.

Instead of a stranded motorist, he found Richter, sitting in the driver’s seat of her car with the sweater-wrapped hawk held to her chest.

A retired nurse from the Oneonta City School District, Richter said she examined the bird as best she could and found no obvious sign of injury, aside from a small drop of blood near Lucky’s nostril.

“I tucked his wings in and we just sat there,” Richter said. “I turned off the radio and just talked to him. He was as happy as can be, sitting in my arms.”

“As a kid, I was always interested in falconry,” said Stalter, a Cherry Valley native. “When you live upstate, especially in this area, and you look out the window and see these creatures, it’s hard not to be fascinated by them.”

Stalter’s avian expertise was not a requirement or a byproduct of his employment with the sheriff’s office, he said, but has served him well throughout his 20-year law enforcement career.

Stalter was among the crew assigned to escort the soon-to-be Rockefeller Center Christmas tree as it made its way to New York City from the West Oneonta yard where it grew. It was on that voyage that a small, dehydrated saw-whet owl, who came to be known as Rocky, was found nestled in the conifer’s branches.

Rocky, who quickly rose to fame as Oneonta’s unofficial mascot and inspired Christmas ornaments, souvenir bobbleheads and a children’s book, was brought to an Ulster County wildlife rehabilitator and later released at an undisclosed location.

Lucky will likely not attract the same international attention as his fellow Oneonta-area raptor, but his rehabilitation and release should be celebrated all the same, Stalter said.

Stalter said he brought the hawk to the Pittsfield home of experienced wildlife rehabbers Charlie and Dorie Koop, where it was determined that aside from a slight head injury, Lucky was in overall good health, with wings intact and suffering no broken bones.

Stalter, who apprenticed under master falconer Charlie, said he has delivered many injured owls and other raptors to the couple’s care.

The Koops will continue to monitor and feed the hawk and decontaminate it from parasites, Stalter said. Lucky is expected to make a full recovery in the coming days and be released near where he was found.

Both Stalter and Richter said they plan to be present for his release.

“I can’t wait to see my new little friend and check on how he’s doing,” Richter said.