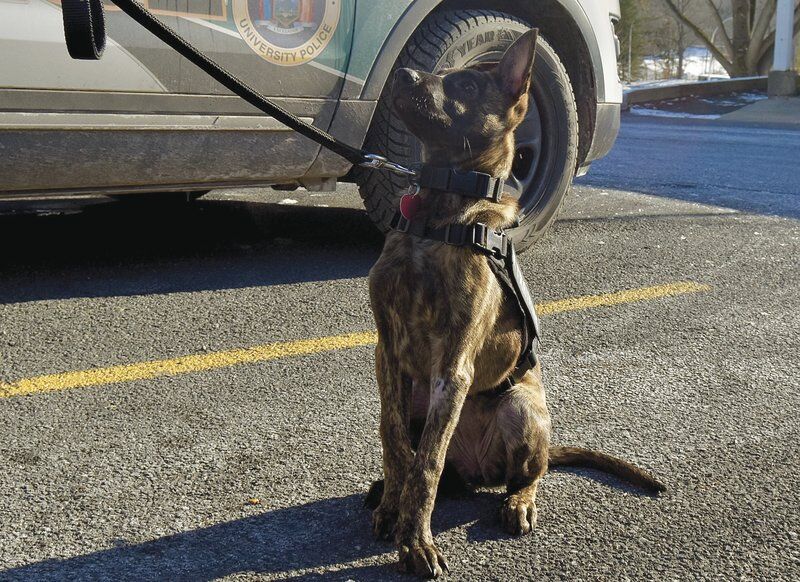 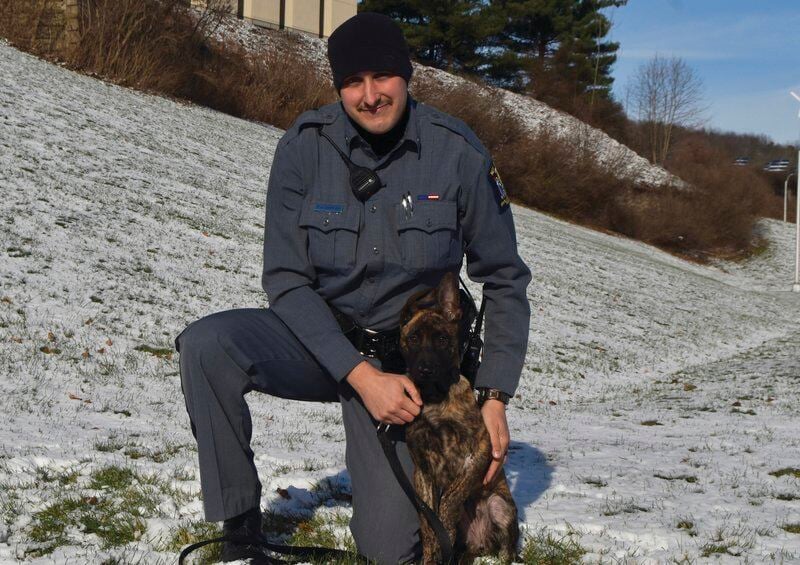 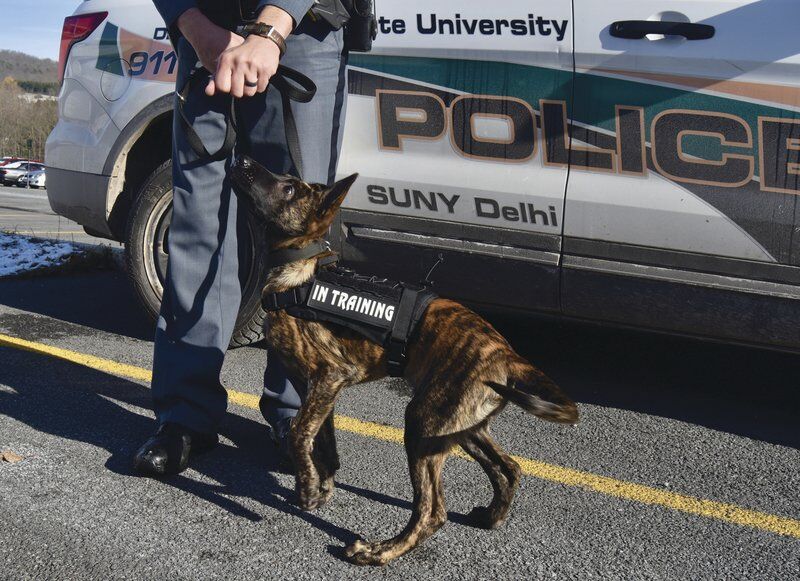 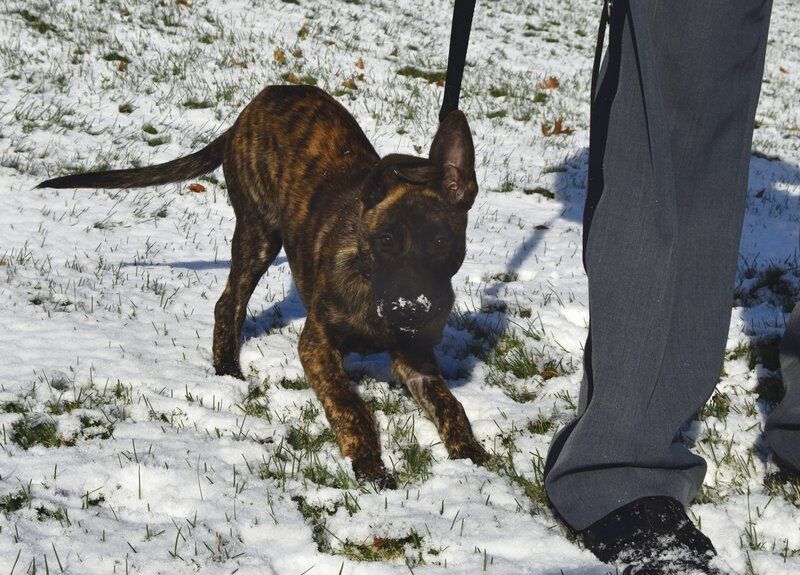 Redd, a 12-week-old Dutch shepherd, is training to be the University Police Department’s first K9, according to Chief Martin Pettit.

“There was a need,” Pettit said. “It’s something we’ve wanted to do for several years.”

In ordinary years, the college hosts several large gatherings a year, including graduation and concerts, Pettit said, and New York State Police dogs are used for explosives detection and search-and-rescue.

Redd was donated by Officer Peter Czaplicki, who is training alongside the dog as her handler and eventual partner. When she retires from her time as a K9 officer, Redd’s ownership will be transferred back to Czaplicki and she will stay with him as a pet.

SUNY Delhi students will provide Redd’s veterinary care and vaccinations, Czaplicki said, and students in the welding program retrofitted his cruiser with a custom kennel.

Czaplicki said he is working with the dog on basic obedience and agility and hopes she will train in explosives detection, tracking and basic article searching next fall with the New York State Police Academy.

In keeping with police tradition, Redd was named for Bruce S. Redden, a former deputy chief of police at Stony Brook University who died of cancer in January.

Pettit said he and Redden were longtime friends and graduated from the New York State University Police Training Academy together in 2000.

Redd was bred by Meridale native Ashley Skovira Aubin and her husband, Case, who professionally breed and train both working and companion dogs from their home in Port Orange, Florida.

The Delhi police dog was the last to arrive in her litter of eight, Aubin said, all of which are female.

Females are the preferred working dog for their critical-thinking abilities, temperament and ability to quickly adapt and overcome changing circumstances, Aubin said.

“There’s a misconception that males are the protectors, but in the working world, you want females all the way,” she said.

Half of Redd’s littermates were placed as post-traumatic stress dogs with active-duty military families or veterans, and the rest will be working dogs or pets, Aubin said.

The dogs begin training and conditioning at three days old in a routine developed by the U.S. military called early neurological stimulation, which involves exposing the pups to stimuli and stressors otherwise uncommon to newborn animals like being held upright and downward, tickled between the toes with a cotton swab and placed on a cold, wet washcloth, all for three to five seconds each.

“Being handled and touched like that helps them be able to better combat other levels of stress later on in life,” Aubin said.

Aubin, whose father worked as a police dispatcher at SUNY Oneonta, said she knew that a police dog destined for a college campus would require a unique disposition and skill set.

“We knew she was going to have to be trained in handler protection and as a public relations dog,” Aubin said. “It’s a big campus. She’ll have to go from working to being a mascot and back again, and she proved to us she had the capability to operate over a multitude of platforms at a variety of speeds.”

Part of Redd’s early training included socializing with the couple’s almost-5-year-old daughter, Riley, who does her part by dressing the dogs up in princess dresses, putting bows in their fur and pushing them in a toy shopping cart.

Aubin praised the dog for her ability to switch from tearing through the mud and scrambling over rocks in the yard to laying still beside the couple’s nine-month-old.

“We chose Redd for her ability to handle whatever we threw at her,” Aubin said. “From the very beginning, she always wanted to be your teammate. There was nothing that dog wasn’t willing to do for me as a handler.”

“Redd’s been great to work with so far,” Czaplicki said. “We’re happy to have her here.”

AFTON - Laurence F. "Fred" Thomas Sr., 78, of Afton, passed away on Wednesday morning, Dec. 2, 2020, at his home. He was predeceased by his wife, Diane Thomas; daughter, Ann Grace Thomas; and brother, Ray. He is survived by six of his children, Laurence F. Thomas Jr., Timothy P. Thomas, Gary…