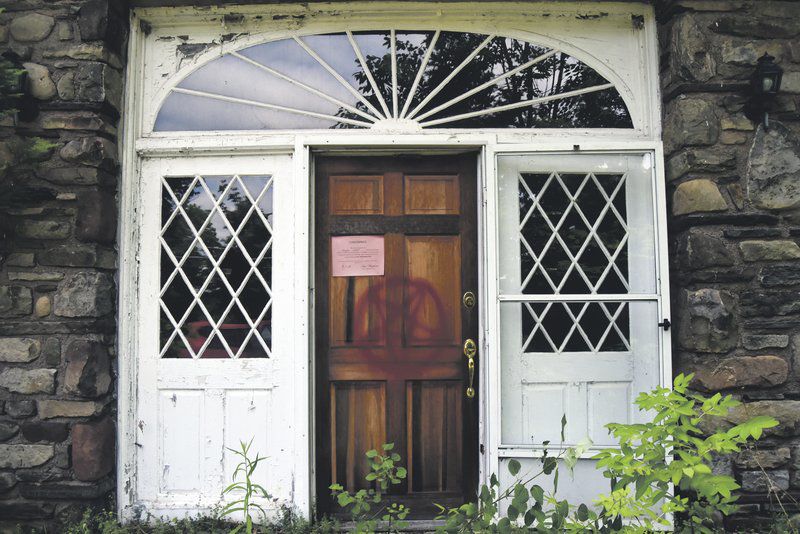 Sarah Eames | The Daily StarA pentagram spray-painted on the front entrance of the Eagle's Nest in Stamford is shown Tuesday. 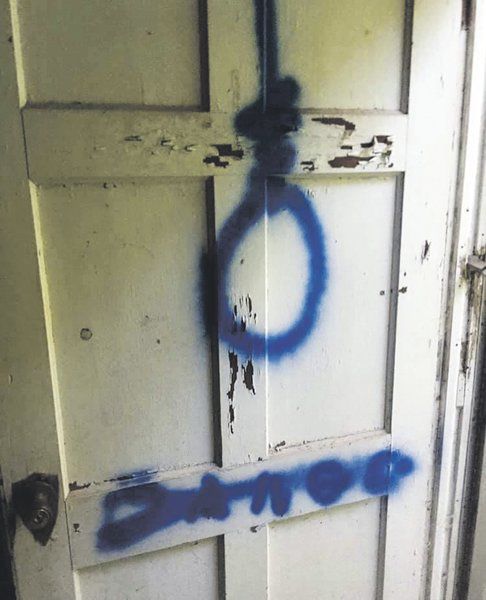 Contributed | Harib Bu-GhaithA noose was among the racist graffiti spray painted on a condemned house in Stamford.

Sarah Eames | The Daily StarA pentagram spray-painted on the front entrance of the Eagle's Nest in Stamford is shown Tuesday.

Contributed | Harib Bu-GhaithA noose was among the racist graffiti spray painted on a condemned house in Stamford.

The Delaware County Sheriff’s Office and New York State Police are investigating the origins of racist graffiti discovered on a historic Stamford residence over the weekend.

The n-word was spray-painted in blue next to a side door on an abandoned residence known among locals as the “Eagle’s Nest,” set back in the woods off of county Route 18. The words “leave now” were scrawled above the door, and a noose was spray-painted on the door.

The property owners had covered the graffiti themselves by Tuesday morning.

Stamford resident Harib Bu-Ghaith said his grandmother discovered the graffiti while walking the family dog Monday. She said she walked past the same spot three days before and nothing was there.

“When she told me what she saw, I had to get the evidence before our town just tried to erase it and never speak about it again,” Bu-Ghaith said. “That’s usually how it goes in small towns.”

“Little things like that kind of get brushed off,” agreed Lane Powley, a fellow Stamford resident who posted the photos to a community Facebook group Monday evening.

Last summer, slurs were found painted on the basketball court, “but everyone decided to just erase it and move past it,” Powley said. “With everything that’s happening right now, it’s super important to talk about it.”

“If I was a person of color, that would terrify me,” she continued. “I have friends that are Black and they haven’t been feeling safe because of this. It was a threat.”

“What happened in Stamford is not a surprise to me because I have had racial slurs said to me before throughout my time living here, and now that it’s out in the open, people who don’t understand can see that this is actually a problem,” said Keyshawn Scott, a friend of Powley’s.

“It’s shameful that people would do that,” Oneonta NAACP President Lee Fisher said of the graffiti. “They’re cowards — they do it at night, they do it when no one else is around. Why don’t they speak out and confront the person?”

Investigators said the intended target of the racist language and symbols was unclear.

Fisher said the perpetrators “put a mark on the community” by spray-painting the noose and the slur.

“When people do things like that, they don’t realize that they pull everyone down,” he said. “In cases like this, it could get worse. It’s like a horrible cancer. It starts in a small section, but then it grows — into the school, the children, the churches.”

“While I personally view this as something done by angsty teens driven by the explosive situations happening across the country, I in no way condone it, nor does it represent the views of the people of the Village of Stamford,” said Stamford Mayor Bob Schneider.

“This guy was the poster child for eccentricity, having numerous wives at one time, more than one simultaneously, and most of whom died while married to him,” Pierce said. “He led a wild and fascinating life, yet died almost penniless in Stamford. His wife had to sell the Eagle's Nest to pay the bills.”

The property and surrounding parcels were purchased from the county in a 2011 tax sale by Delair Enterprises, Inc., which is managed by Douglas Murphy, according to Delaware County tax records. The Murphys are descendants of Fred Murphy, a philanthropist and businessman who owned Encyclopedia Americana and served as president and board chair of the Grolier Society, according to Schneider.

The house was condemned in 2018 and declared “unfit for human occupancy or use” by Tomi Tompkins, who serves as Stamford’s code enforcement officer building inspector.

“This vacant property has been an attractive nuisance for many years and attracts vandalism,” Schneider said, identifying the “usual graffiti hallmarks” such as swastikas, pentagrams and phallic symbols. “I have asked the property owner to do something to secure the structure and will have a broader conversation with him about this in the near future.”

Delaware County Sheriff Craig DuMond said the property owner “had not been very cooperative in the past” when deputies responded to other complaints at the location.

“If you’re silent, you’re condoning it,” Fisher said. “When they talk about making this nation great, that greatness comes from the people who step up and do something when things are wrong.”

Anyone with information that may lead to the identification of the person or persons responsible is asked to contact Cpl. Eric Alexander at the Delaware County Sheriff's Office at 607-832-5555, eric.alexander@co.delaware.ny.us, or at the 24 hour toll-free hotline, 1-888-914-9111. All calls will remain confidential.

The village of Stamford is seeking local residents to serve on a new Commission on Unity, formed in response to the racist graffiti discovered…