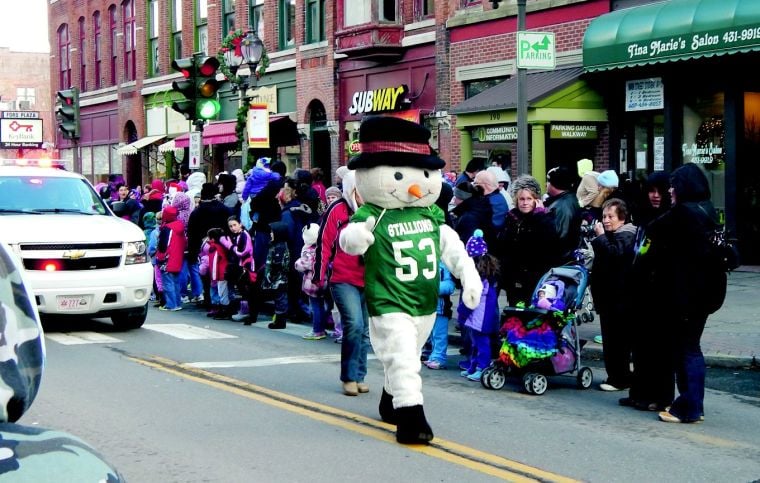 Frosty the Snowman walks down Main Street during the parade. 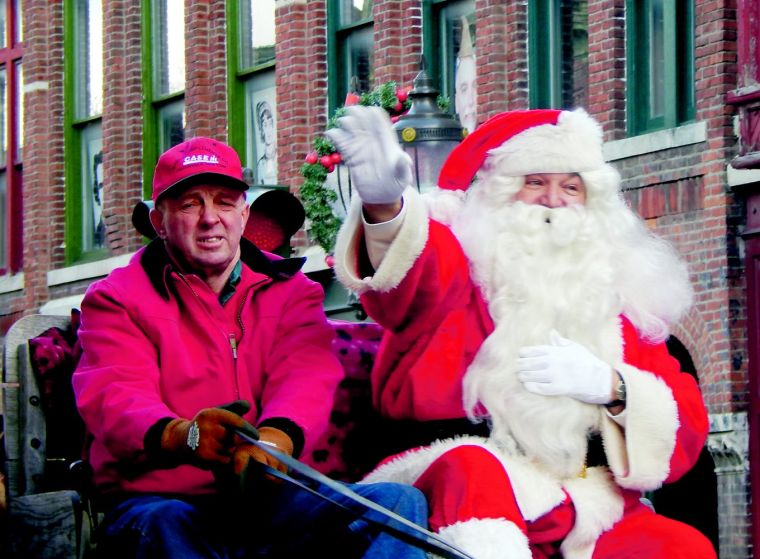 Santa arrives at the end of the parade Saturday jn a horse-drawn wagon driven by Don Decker of Deckerdale Farm in Laurens.

Frosty the Snowman walks down Main Street during the parade.

Santa arrives at the end of the parade Saturday jn a horse-drawn wagon driven by Don Decker of Deckerdale Farm in Laurens.

The holiday season has officially begun in Oneonta, now that Santa Claus has arrived in town.

The “Jolly Old Elf” was escorted downtown on Saturday during the holiday parade. He sat in residence in his house on Mueller Plaza for a couple of hours following the parade visiting with area children and inquiring as to which presents they might like.

“The children have been so excited to see Santa and to tell him all the good things they have done this year,” said Allison Green of Oneonta, who is helping Santa this year.

Santa had the distinction of riding in a wagon pulled by two white horses. Crowds lined Main Street as floats passed by, waiting for Santa, whose carriage was the last in line.

“I’d say we had between 1,500 and 2,000 people in attendance this year,” Main Street Oneonta Program Director Julia Goff said. “There was a very large turnout at the parade this year. Up from previous years.”

The parade began on Grand Street at 11 a.m. There were about 35 participants in the parade, up from last year’s 25 participants.

“It is cold, but it is fun too,” said Jacob Fisher, 12, of East Meredith who was riding his pony Sassafras in the parade.

In addition to added participants and more observers, there was a new element to the parade this year. “Mice on Main,” a game coordinated by Fokine Ballet and Main Street Oneonta, challenged participants to find all of the Nutcracker mice in store fronts along Main Street.

Each person playing the game was given a bingo-style card and a set of clues hinting where the Main Street mice may be hiding. Those who had their card stamped by each mouse won a free ticket to the Decker Ballet Nutcracker.

“It went really well,” said Heidi Tanner-Brantley, coordinator of the event. “We gave away about 15 tickets, which was nice. Some of the tickets we redeemed for the bingo cards went to people who may not have been able to attend the Nutcracker. So that is really good.”

In addition to Santa Claus, a large part of the Decker School of Ballet Nutcracker cast and several equestrians, the parade included a diverse mix of participants. First Night puppets were joined by Frosty the Snowman, as well as performers from several local dance schools and gyms.

O’Donnell-Kelly School of Irish Dance from Cooperstown, Body by Stacy-Ripped, Jillian’s Dance Arts Studio, Elite Dance Academy, Leatherstocking District Pipe Band and DeRailing Darlings were among those who performed for the parade judges.

The parade exhibits were judged and the winners announced. Best Performance went to Elite Dance Company; Most Spirited went to Oneonta High School Girls Soccer Team; Most Creative went to Robynwood; and Most Oohs and Aahs went to O’Donnel Kelly Irish School of Dance.

“Each winner is awarded $70 in ‘Downtown Dollars,’” Goff said. “This is money that can be used as cash at select downtown merchants and is funded by Main Street Oneonta.”

After the parade, many people remained on Main Street shopping, dining and visiting throughout the afternoon.