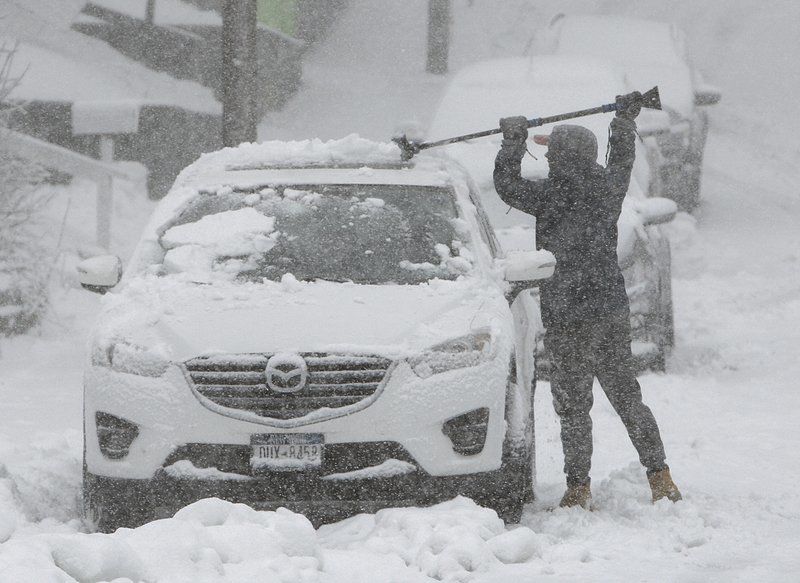 Julie Lewis | The Daily StarZachary Chartrand is barely visible as he cleans the snow off his car on Myrtle Avenue to move it to off-street parking in the municipal garage in Oneonta on Friday. 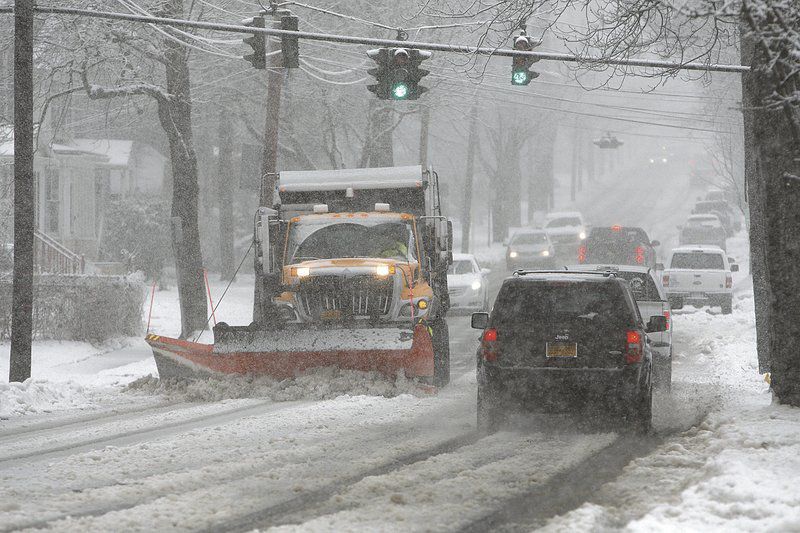 Julie Lewis | The Daily StarZachary Chartrand is barely visible as he cleans the snow off his car on Myrtle Avenue to move it to off-street parking in the municipal garage in Oneonta on Friday.

Local National Weather Service observer Dave Mattice said that by Friday afternoon the bulk of the snowfall was over. Saturday, Feb. 8, will be blustery and cold, he said, but no snow is expected.

The same fast-moving storm system that caused severe thunderstorms and tornadoes in the South moved upward and caused the snow dump in the Northeast, he said.

“It was quick-hitting but it was a dangerous storm and made for treacherous driving,” he said.

In Roxbury, a school bus with students on their way home from a half-day just before 1 p.m. drifted into a ditch because of road conditions, Roxbury Volunteer Fire Department Firefighter Allen Hinkley said. The six or seven elementary school-aged students and the driver were all safe and uninjured, he said, and the students were released to their parents after the accident.

Otsego County Sheriff Richard Devlin Jr. said early Friday afternoon that all county law enforcement cars were tied up responding to accidents, which he said involved no deaths or injuries.

The accidents mostly caused property damage, with cars running off the roads, hitting trees and each other he said.

SUNY Delhi, SUNY Cobleskill, Hartwick College and SUNY Oneonta all canceled Friday afternoon classes due to the inclement weather. In Oneonta, bus service to SUNY Oneonta and Hillside Commons was temporarily suspended in the afternoon, resuming at 2 p.m.

Chenango County had a winter storm warning in effect until midnight Friday night, with additional snow accumulation up to one inch expected, according to a National Weather Service alert.

County Sheriff’s Office Chief Dispatcher A. Wesley Jones said the office started getting calls around 11 a.m. and had about a dozen accidents as of Friday afternoon, mostly resulting in property damage. In a few different areas there were also some “jack-knifed” tractor trailers. This is when the cab of a truck swings out in the opposite direction of a trailer, which can block the roadway.

Oneonta Police Department Lieutenant Christopher Witzenburg at 3 p.m. Friday afternoon said since 10 a.m. that morning, there were nine weather related calls and of those, seven were car accidents. They were all relatively low-speed, he said.

“The snow is very heavy and wet today,” Witzenburg said. “It clogs tires and doesn’t allow good traction with the road surface. Cars will just slide very slowly into each other.”

Witzenburg recommended drivers stick to the plowed portion of the road and not allow their wheels to touch the snowbanks that have been created by snowplows on the right side of the road. This can cause cars to get pulled off the road, he said.

Operators of the state Thruway reduced the speed limit across more than 100 miles of the highway from 65 miles per hour to 45 miles per hour because of icy, snowy conditions, the Associated Press reported on Friday.

Mattice said the region was spared more snow than it would have been if the storm system hadn’t moved so fast.

“It didn’t slow down like some of them do,” Mattice said. “If it had, it could’ve pumped several more inches if not a couple of feet down here.”