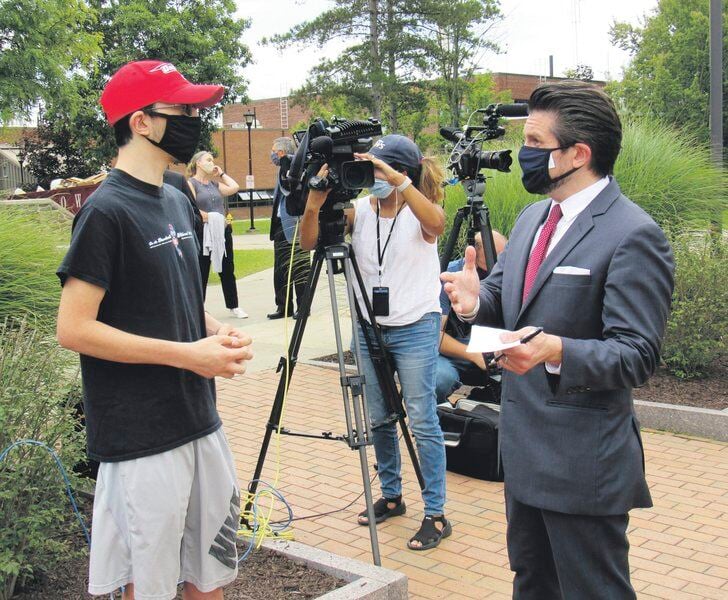 Robert Cairns | The Daily Star Chriostopher Frommeyer, left, a SUNY Oneonta student from Long Island, talks Thursday with SUNY Chancellor Jim Malatras Thursday on the Oneonta campus, after Malatras announced no classes will be taught on campus for the remainder of the semester. 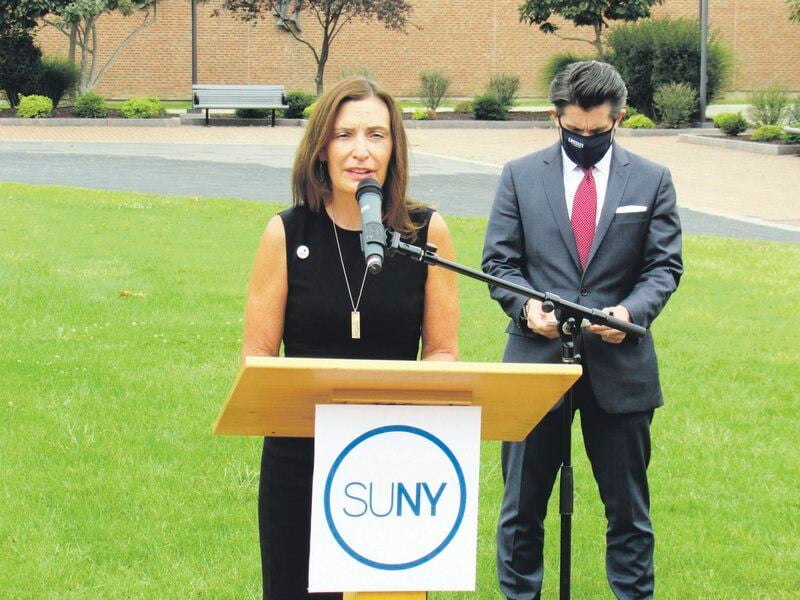 Robert Cairns | The Daily StarSUNY Oneonta President Barbara Morris speaks to members of the media Thursday on the Oneonta campus as SUNY Chancellor Jim Malatras looks at his notes.

Robert Cairns | The Daily Star Chriostopher Frommeyer, left, a SUNY Oneonta student from Long Island, talks Thursday with SUNY Chancellor Jim Malatras Thursday on the Oneonta campus, after Malatras announced no classes will be taught on campus for the remainder of the semester.

Robert Cairns | The Daily StarSUNY Oneonta President Barbara Morris speaks to members of the media Thursday on the Oneonta campus as SUNY Chancellor Jim Malatras looks at his notes.

"Today's a tough day for SUNY and for SUNY Oneonta."

Those were the words of State University of New York Chancellor Jim Malatras as he announced Thursday afternoon that classes will not be held on the Oneonta campus for the remainder of the semester because of an outbreak of the COVID-19 virus, and that students will be sent home.

He said a decision about the spring semester would come "at a later time."

Malatras announced at press conference that 13% of SUNY Oneonta students had tested positive for the virus.

"Given the dramatic increase in cases," he said, "I directed President (Barbara) Morris to transition to online learning for the rest of the semester."

Morris said she would address students about the situation later Thursday and that the college will create a "move-out" plan.

Students who are on isolation or quarantine after testing positive for the virus will "finish out that process" on campus Malatras said.

Online learning had already been ordered for two weeks, beginning on Aug. 31, in response to the college reaching 100 confirmed cases. The numbers have nearly quadrupled since that time.

Morris said there would be no instruction, at all, on Friday, Sept. 4, as the transition begins.

Malatras said he had asked Morris for a transition plan that is "orderly" and can be implemented in "a safe and effective manner."

He said SUNY will work with local health departments in Otsego County and in the communities to which students will be returning to make sure the transition is safe.

He also announced that full refunds will be issued for rental of dorm rooms and that refunds of other costs "will be worked out."

Malatras said Hank Bennett, an advisor from his office, will remain in Oneonta to help with planning. Bennett had already been on the campus, helping to implement online learning for the initial two-week period, Malatras said.

Malatras laid the blame for the outbreak at the feet of students who attended large parties without taking health precautions.

"I hope this serves as a wake-up call for the entire campus community," he said. "This is a serious matter."

He said "the vast majority" of students "were doing the right thing," and the shutdown shows "a small minority can ruin it for everyone else."

He said a party "of just a few dozen students" led to infections in dorms, as shown through pool testing of students.

"We needed to act immediately," he said.

Morris said the college has developed a "rough draft" plan for online learning.

She said Upstate Medical Center in Syracuse had provided 3,000 tests to the college and, "It has been sad to get the results back."

Malatras confirmed that Oneonta's outbreak is the worst in the SUNY system, with 389 cases reported as of Thursday afternoon. "There's no one who comes close to that," he said.

He indicated the Oneonta situation will lead to stronger actions elsewhere, saying mandatory testing will take place throughout the SUNY system. "We're going to get more aggressive on testing," he said, and said "We will act swiftly" if rising trends of infection are spotted.

He said the system can now process 105,000 tests per week and there are about 180,000 students, fewer than normal, on SUNY campuses statewide. "We can test everybody every two weeks," he said.

Malatras also said there will be no tolerance for students who place public heath at risk. "I want to be the fun chancellor, but we're not in normal times," he said. "I'm going to act swiftly and aggressively."

A student representative, Christopher Frommeyer of Long Island, asked Morris, "Why did it take so long and 389 cases to shut down the college?"

Morris noted the "fast developing" situation and said many students and community members have shown no symptoms. "I really do think we acted swiftly on this," she said.

In a media release from SUNY, state Sen. James L. Seward said, “While this is a drastic step, it is a necessary action to protect those on campus and the Oneonta community at large. I commend Chancellor Malatras for his responsiveness and close consultation with local health officials. As we move forward, we must keep the lines of communication open and work together to ensure that proper health and safety guidelines are instituted and followed.”