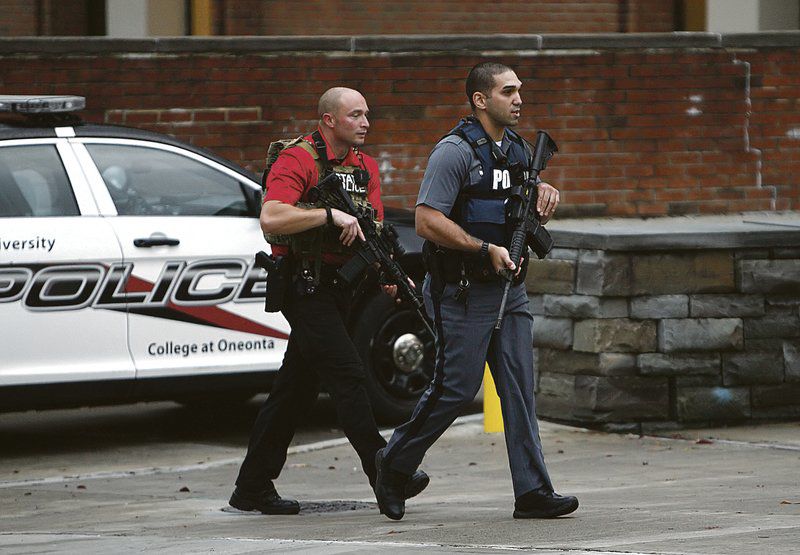 Julie Lewis | The Daily StarPolice officers are seen near Schumacher Hall on West Dormitory Road at SUNY Oneonta on Wednesday. 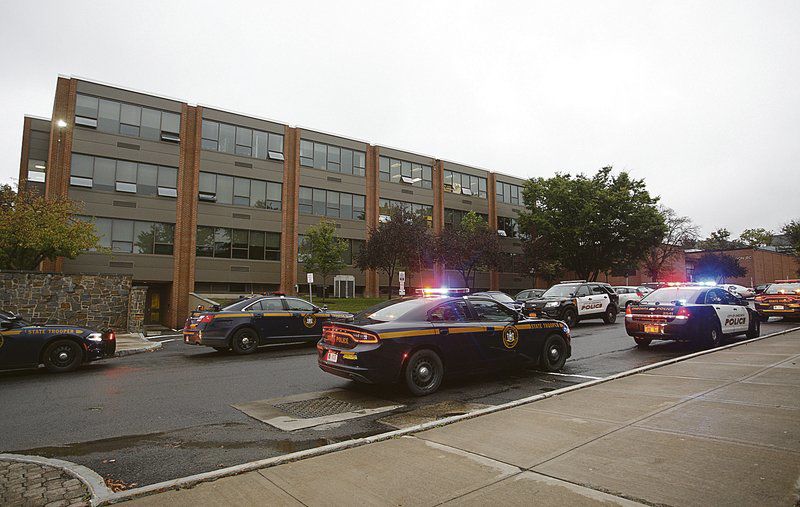 Julie Lewis | The Daily Star Police vehicles are seen parked on West Dormitory Road outside of Schumacher Hall at SUNY Oneonta on Wednesday.

Julie Lewis | The Daily StarPolice officers are seen near Schumacher Hall on West Dormitory Road at SUNY Oneonta on Wednesday.

Julie Lewis | The Daily Star Police vehicles are seen parked on West Dormitory Road outside of Schumacher Hall at SUNY Oneonta on Wednesday.

Reports of an active shooter Wednesday at SUNY Oneonta that led to a campus-wide lockdown for more than half an hour were nothing more than a threat, according to college officials.

In a statement issued at 7:40 p.m., the college said “the reported threat of violence on campus this afternoon was the result of a cyber-crime and posed no actual danger.”

A crisis hotline in New York City contacted SUNY Oneonta around 3:38 p.m. to share a message allegedly sent by a student at the college indicating that the caller intended to shoot people on the campus, according to the statement.

An initial investigation deemed the threat to be credible, according to the statement, and at 5:30 p.m., SUNY Oneonta officials sent out an alert through the college’s mass communication system advising students, faculty and staff to “shelter in place.”

“University Police has received notification that a current student believed to be on campus is threatening to shoot members of the campus community,” the alert read.

The first report came from Schumacher Hall, according to scanner traffic. Oneonta police cleared the dormitory and proceeded to the library, where a suspect was reported to be apprehended in the sub-basement shortly before 6 p.m.

First responders reported no injuries, according to the scanner.

At 6:14 p.m., the college lifted the shelter-in-place advisory, stating “there is no immediate danger to the campus.”

The threat never escalated to an active shooter situation, according to Oneonta Police Chief Douglas Brenner.

“While a threat was made, there was no means to carry it out,” he said, adding that no weapons were found. “There was never a threat to the public.”

A subsequent investigation traced the initial threat to the phone of an unidentified female student, who was found to have reported to the Oneonta Police Department that her phone had been hacked, according to the statement.

“When University Police located her, she was working with the college’s Information Technology Services staff to address this,” the statement said.

In the wake of an active shooter threat on the SUNY Oneonta campus Wednesday, thousands have signed petitions criticizing the administration’s…

WAPPINGERS FALLS - It is with great sorrow that we announce the sudden passing of Janet Lucille Cohen on April 3, 2020. She was born in Plattsburgh, on April 11, 1949, the daughter of the late Jud and Jane Lancto. She is survived by her loving husband, Larry Cohen, who she married on May 23,…