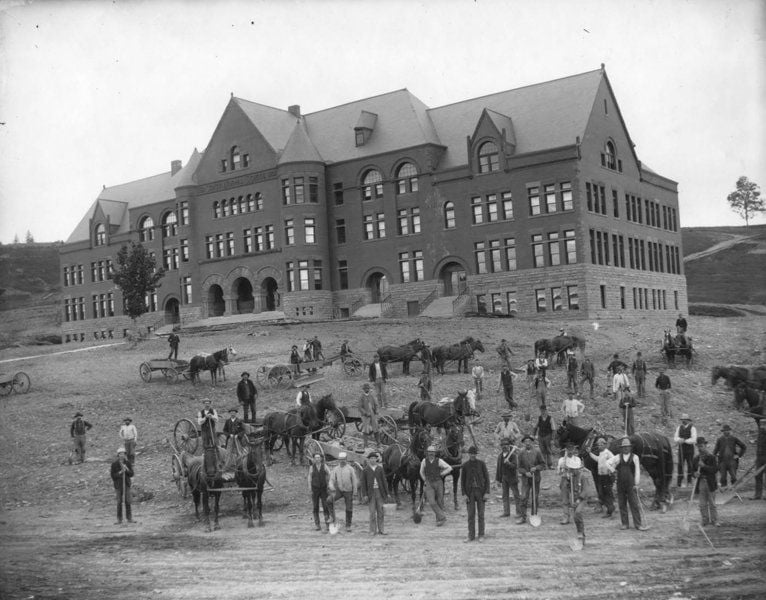 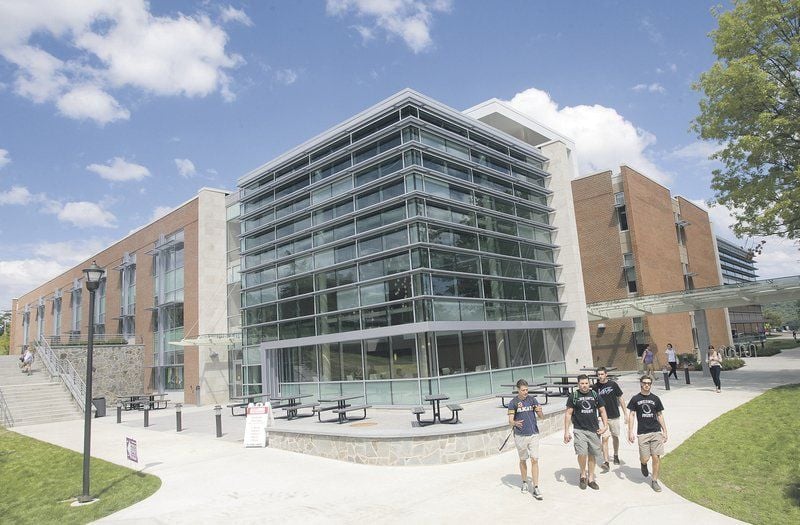 Benjamin Patton | The Daily StarFitzelle Hall on the campus of SUNY Oneonta is shown Monday after it was re-opened for the fall semester.

Benjamin Patton | The Daily StarFitzelle Hall on the campus of SUNY Oneonta is shown Monday after it was re-opened for the fall semester.

“I see possibilities full of promise.”

This was a quote from a speech given by Dr. James M. Milne, as timely in 2014 as it was on Sept. 4, 1889, from the front steps of the new Oneonta Normal School during a dedication ceremony of the school we know today as the State University College at Oneonta. The college is set to celebrate its 125th anniversary next week.

Present-day students and alumni of SUNY Oneonta will gather Friday, Sept. 5 for a variety of events held on campus. It will be known as “Red Day,” a tradition that has been held since 2007, always held on the Friday closest to the founding day, Sept. 4.

“It was created by students to create spirit and enthusiasm for the college,” according to Paul Adamo, Vice President for College Advancement and Executive Director of the College Foundation.

During the morning and early afternoon hours the Oneonta Future Alumni Network will be holding a series of events on the campus quad. There will be a giant birthday cake cutting at noon, with the image on the cake’s frosting that of the college’s original building, known as Old Main.

A luncheon will be held at 12:30 p.m. at The Otsego Grille in Morris Hall. Dr. David Brenner, a member of the Class of 1957 and a former associate vice president for academic affairs will be the keynote speaker, the theme being “The Role of Values in the History of SUNY Oneonta.”

At 6 p.m. at the Hunt Union Waterfront there will be a ceremony to recognize Alumni of Distinction. Adamo said over 200 living alumni will be recognized for the way they’ve personified the college.

“They were nominated in nine categories for those who’ve distinguished themselves in their careers, in service to their communities and commitment to SUNY Oneonta,” he said. The Alumni of Distinction are those who graduated from around 1960 to present. “It is an impressive roster,” Adamo added.

Fireworks at dusk will complete Red Day, but the 125th anniversary celebration will continue throughout the academic year to follow the theme of SUNY Oneonta’s fundraising campaign, reflecting Dr. Milne’s speech, “Possibilities Full of Promise.” The college has been working to raise $12.5 million, a campaign that began in 2010, to conclude at the end of June 2015.

To date, $10.4 million has been raised, Adamo said. The funds will be used to support the college’s strategic plan, grants and gifts, endowment to support teaching, scholarships global connectedness and experiential learning.

Adamo said that are nearly 5,000 SUNY Oneonta alumni in the Otsego, Chenango and Delaware county area.

The festive day on Sept. 4, 1889 was several years in the making for the Oneonta Normal School. The concept of a normal school dated back to 1839 when three young women reported to Lexington, Mass. with intent of attending the first state funded school specifically established for public teacher education, referred to a “normal” school.

Albany was the first in New York to establish a normal school in 1848. After the Civil War the state Legislature established six more across the state. More were approved during the 1880s.

Oneonta wanted one of these “public institutions.” It was a booming village at the time as the D&H Railway was hiring, a new state armory was built here, and with the prosperity came rising salaries and prices.

Despite prosperity, Oneonta’s leaders wanted more. A headline in The Oneonta Herald in June 1888 read, “New Industries Wanted.” Concurrently with this drive was a campaign to attract a public institution. The Herald supported the election of Frank B. Arnold, a two-term state Assemblyman, for the state Senate because his experience would be useful in securing a public institution such as a normal school. Arnold was elected that year.

The competition for locating a school here was fierce, as several area communities vied for this economic prize. Franklin, Unadilla, and Gilbertsville entered the race.

Senator Arnold was successful after a few rounds of negotiations with the legislature and Governor David Hill, in securing $114,000 for the new school in Oneonta.

On Tuesday, April 17, 1888, a dispatch to The Herald announced that the governor signed the bill. The news was joyfully received at the Herald, as Willard Yager and George Fairchild, then jointly engaged in publishing The Oneonta Herald, had been credited as the originators of the normal school idea for the village.

As it was near noon, word was passed to the railroad shops, to businesses, churches and elsewhere, and the result was an incredible clamor of celebration throughout the village.

With funding in hand, the next task was to find a location for the school. Several sites were considered, and the choice was made for the Delos Yager farm, at the top of today’s Maple Street.

Not even five years into its existence, tragedy struck at Oneonta Normal School. Classes had finished for the day at 5 p.m. on Thursday, Feb. 15, 1894. A fire was discovered shortly after the building was closed, spread quickly, and by 7:30 p.m. the roof had fallen in on the building. While much was lost, the hope and confidence that the Normal school would be back did not fade.

“When will the school reopen?” was the common question asked Thursday evening of Dr. Milne.

“We haven’t closed yet,” was Milne’s response. He called for a meeting of the school at 3:00 p.m. Friday at the Metropolitan Theatre, then found on Dietz Street, near the lower level of Huntington Park.

Meanwhile by daybreak on Friday, two members of the Normal School Board, the Hon. Walter L. Brown and George I. Wilber, were in Albany. The state Legislature was in session and within a few hours a bill had been drafted appropriating $75,000 in insurance money the school had, to begin rebuilding in Oneonta. The duo also got permission granted for the temporary use of the state armory on Fairview Street.

At a 3 p.m. meeting that same day in Oneonta, Dr. Milne informed those gathered about the money to start rebuilding. Classes would resume Monday, with the teacher training unit to be held in the Stanton Opera House, where 125 Main St. is found today, and all others at the armory.

Classes began and by the next day the almost entire Normal School Board was back in Albany in the interests of another bill appropriating the completion of the new building. The old site was suitable, as the massive foundation was intact and some brick was salvageable. The local board sought $100,000, and by 3 p.m. the same day the governor had signed the bill.

The new building was a bit larger than the old one, and a portion of it was ready for the first classes on Sept. 5, while others were still off campus. In December the official dedication was held.

The Oneonta Herald commented in the Sept. 13, 1894 edition, “The new Normal building, large as it is, will be none too large, for the increased attendance in a few years more will make even the present seemingly ample quarters inadequate.”

Crowding became an issue in the late 1920s. The building was designed for 450 students. In the autumn of 1929 there were 676. These were just the students learning to become teachers. Children from kindergarten, elementary and intermediate school grades attended classes here as well, as this was a teacher training site.

The crowded conditions had been building up over the last few years and there had been talk of adding a second building to the Normal School. The talk phase changed into action in 1929 and within a few years a new campus school was opened, known to generations of students and teachers as the Percy I. Bugbee School. The school served the community from early 1933 to 1975, presently used for other purposes.

Dr. Bugbee’s successor, Dr. Charles W. Hunt was the first to work at preparing the normal school for expansion in the future, and he did so during the years of The Great Depression. Dr. Hunt and the Oneonta Normal School’s Board of Visitors attended an Oneonta Common Council meeting on Tuesday, Feb. 20, 1936, and put forth the request for $25,000 to acquire about 25 acres of land for future expansion.

Common Council was unanimous in their approval of the request. However they needed to have a public hearing for the funding, as well as establish the procedure of a city purchase of land that would then be turned over to the State of New York.

Oneonta’s taxpayers had their chance to weigh in on this proposal on Tuesday, Apr. 7. Critics felt it was a terrible time to increase the tax burden, in the midst of the Great Depression, but the supporters far outnumbered them, asserting that commercially such a venture would return its costs many times over in the years ahead.

The Depression eased but then World War II broke out, and the land stood idle for several years. It didn’t stop Dr. Hunt from seeking even more land for expansion. Hunt urged his faculty and other community members in 1944 to donate money toward more land, and by the end of that campaign, there were nearly 80 acres to work with. Plenty more land was added in later years.

It was a wise investment, as the first dormitories, library and academic buildings were constructed during the 1950s on the “new campus” on the hillside above Old Main.

The October 20, 1962 edition of The Oneonta Star had a huge headline, “$25 Million Expansion Program at SUCO.” The Oneonta college capacity was planned to double by 1970.

With the announcement in 1962, Dr. Royal F. Netzer, college president, said that plans for eight new buildings were already on the drawing boards. Under construction at the time were a new science-mathematics building scheduled to open in August 1964, and a new dormitory by August 1963.

When the expansion plans were announced, there were projections of 3,600 students to be enrolled by 1970. At that time, there were 2,046.

This amazing building boom lasted into the early 1970s. Large-scale construction may have ended at that time, but it returned slightly since the late 1990s. Two major projects have been the Alumni Field House in 1999, and Higgins Hall which opened in 2004. The latter was a large dormitory named after Robin Ross Higgins, a 1972 graduate.

With the recently opened and privately operated Hillside Commons, along with massive renovations to Fitzelle Hall and the James M. Milne Library, SUNY Oneonta continues to show “possibilities full of promise.”

For additional information about Red Day or the Possibilities Full of Promise campaign, visit www.oneontaalumni.com