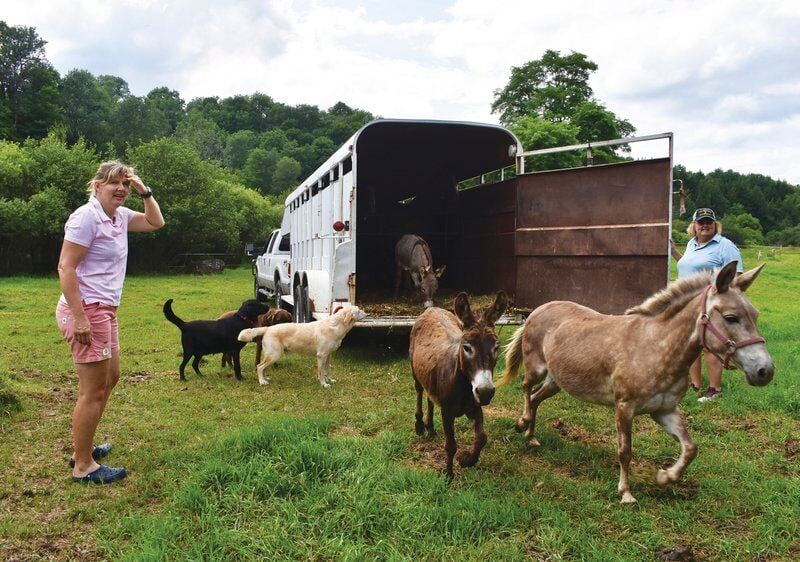 Judith Woerler, left, owner of The Sweet Life Animal Ranch & Rescue in Morris, looks on as a pair of mules run out of a trailer driven from Louisiana by Lynda Carter, right, Friday, July 16. 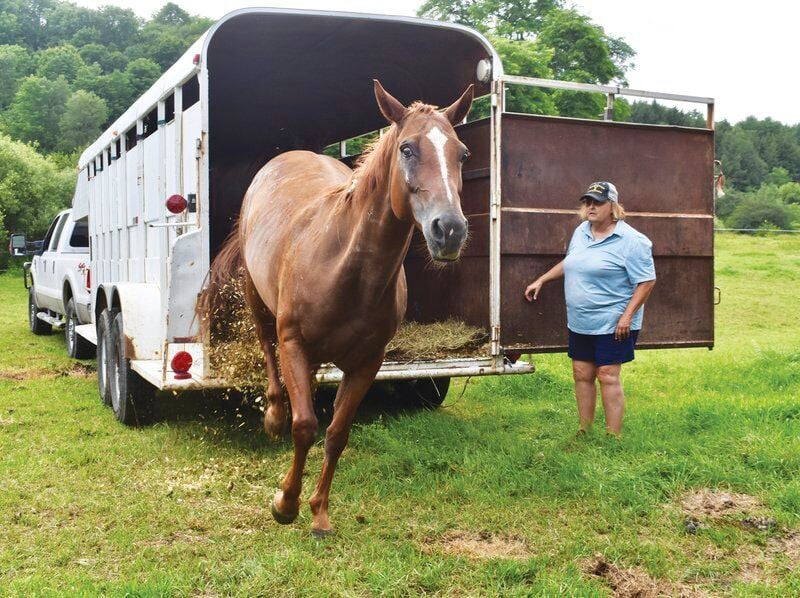 Sarah Eames | The Daily StarDancer, a 6-year-old mare, takes off out of a trailer driven by Lynda Carter from Louisiana to The Sweet Life Ranch & Rescue in Morris on Friday, July 16. 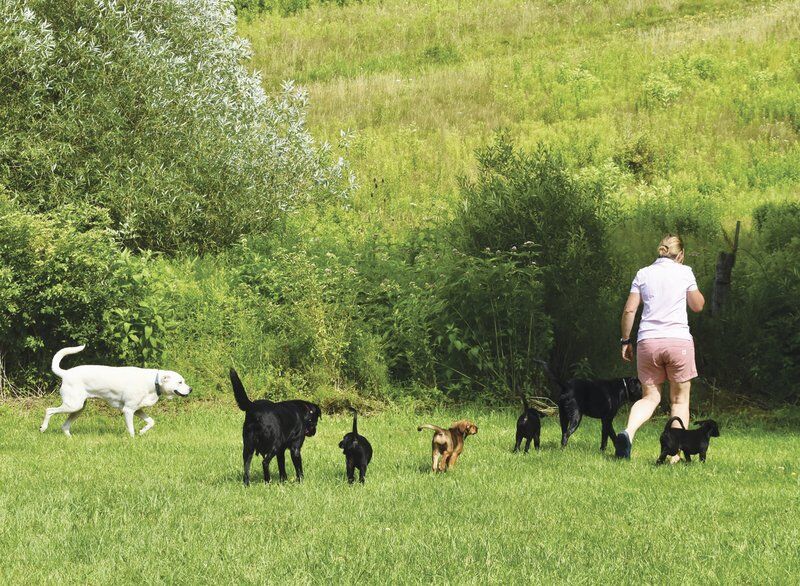 Judith Woerler, left, owner of The Sweet Life Animal Ranch & Rescue in Morris, looks on as a pair of mules run out of a trailer driven from Louisiana by Lynda Carter, right, Friday, July 16.

Sarah Eames | The Daily StarDancer, a 6-year-old mare, takes off out of a trailer driven by Lynda Carter from Louisiana to The Sweet Life Ranch & Rescue in Morris on Friday, July 16.

Judith Woerler seems to pick up animals wherever she goes.

“The plan is to save them all — that would be the dream,” she said.

The Bavarian-born owner of The Sweet Life Animal Ranch & Rescue in Morris set out for a new life upstate last year with her two eldest dogs, Marley and Tony, and three cats in a motorhome.

When engine trouble stranded her in a small town in Alabama, Woerler said, she picked up a pair of stray black labs who had been running the streets for as long as anyone in the area could remember. It was then that Ella Fitzgerald and Enzo Ferrari joined the pack.

Within weeks, Ella gave birth to a litter of seven healthy puppies.

“I didn’t even know she was pregnant until about two weeks before,” Woerler said. “She must have been hiding them in her luggage.”

Last month, at a walk-through art exhibit in the woods of Mount Vision, Woerler said, she encountered a woman searching for homes for 9-day-old kittens and couldn’t pass up the opportunity.

From there, Woerler said, she connected with another local woman looking for homes for a pair of orphaned kittens.

“I have plenty of barns. I’m sure they can find somewhere to go,” Woerler recalled thinking. “This property had been sitting empty for at least eight years — there were groundhogs, mice, beavers. I needed some barn cats.”

Newest to her brood are half a dozen equines rescued from a truck bound for slaughter in Mexico: two horses, two mules and two donkeys, which arrived Friday, July 16.

“I came across some horse rescue Facebook pages where horses in kill pens basically get advertised, hoping to find someone to save them off the truck. Because I didn’t have the property yet, I could never get one for myself. I chipped in whenever I could,” Woerler said. “Now, finally, I knew the barn wasn’t ready and I’m still waiting for the fencing, I thought, ‘Aww, let’s just get them. We have space.’ It won’t be huge, but it’ll be much better than the kill pen.”

Through a mutual friend in Germany, Woerler connected with Lynda Carter, a seventh-generation rancher from La Jara, Colorado, who picked up the equines from a kill pen in Louisiana and drove them more than 1,500 miles to the rescue in Morris.

“They know they’re safe now,” Carter said as she watched the donkeys and the mules sprint out of the trailer and trot around Woerler’s pasture. “When they get out and start rolling around like that, that means it’s been a good transport. That’s the best thing.”

The horses hesitated a moment before they, too, bounded out and explored their new home, rolling in the grass and nibbling in the shade.

Carter said she has transported thousands of animals across the country for breeders and rescuers alike, though she charges the latter half the going rate.

“It’s hard, with prices of fuel going up the way they have been,” she said. “If I can keep my costs down, that means that more animals can be rescued.”

“To me, getting them here safely is really important,” Carter continued. “If I can help these animals, I would much rather get them a home than see them get slaughtered.”

“I’m the only animal crazy in the family,” she said. “No one really got it.”

Woerler, who was living in Florida at the time, said she was flipping through a real estate magazine and was astounded at what she described as the “super reasonable” rates for purchasing an upstate New York farm.

She brought her four-legged family members on a trip in September, beginning in western New York and traveling as far east as Delhi before settling on the three-bedroom farmhouse in Morris.

“When I saw this place, I knew. To me, it’s really special. It has a certain vibe,” she said. “My plan had always been to move to the West Coast — California. With the drought, I thought maybe Oregon, but it’s been just as bad and it’s been getting worse every year.”

Woerler said she wanted space for her dogs and soon after realized her dream of owning horses and rescuing animals.

The farm animals filed in a few at a time: first a horse for riding, and then a second rescue. A pair of donkeys, Sofia and Tino, soon followed from a local auction.

Estimating Sofia to be about 25 years old, Woerler said she quickly took pity on her.

“She was skin and bones, but they still advertised her as rideable and able to pull a cart,” Woerler said. “She had no hair on her nose from the bridle, no hair on her sides and ribs from the harness, her tail was naked. It was really despicable. The auctioneer just read off what the owner had given him, but he said, ‘She looks like she needs some TLC first.’”

Woerler said she is looking to team up with nearby animal rescue efforts and serve as a foster home as needed.

“I don’t know too many people in the area, and as a rescue, it can be hard to find the volunteers and find the support,” she said. “One thing about this area that really blew me away is that people come by and say hi, just to introduce themselves — ‘Let me know if you need anything!’ — and they really mean it.”

A neighbor helped pour the concrete in her refurbished dairy barn before its newest residents arrived Friday, Woerler said. “He’s worth more than his weight in gold.”

As she continues to develop her property, Woerler said, she intends to expand her rescue efforts.

For more information or to donate, visit here or follow “The Sweet Life Animal Ranch & Rescue” on Facebook.