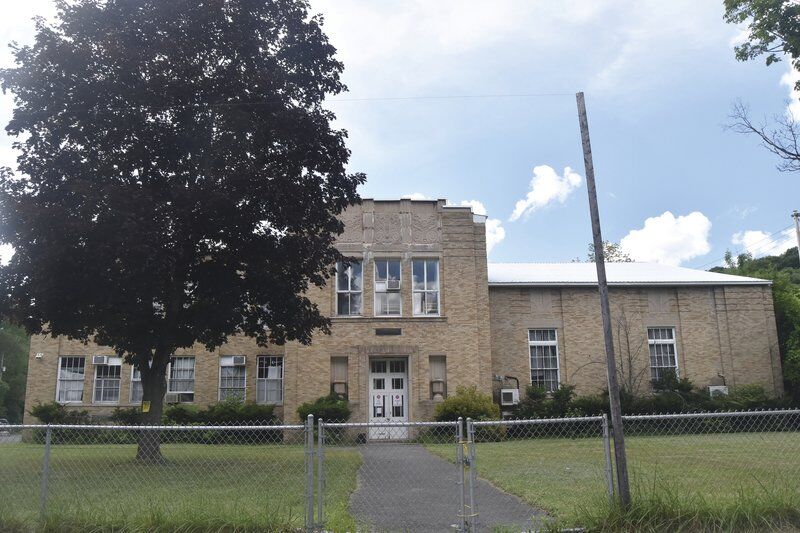 Sarah Eames | The Daily Star The Yeshiva Metzyoonim Dsatmar — Hebrew for "School of Excellence of Satmar" — housed in the former Fleischmanns school, is shown Monday. 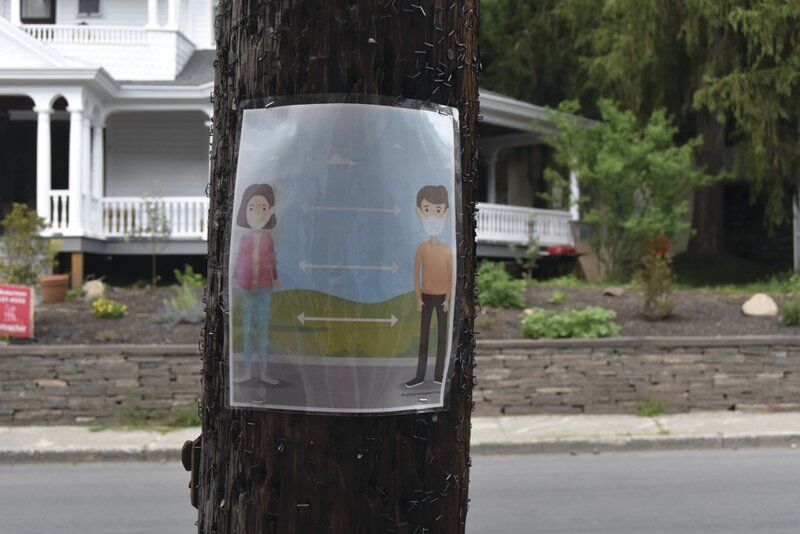 Sarah Eames | The Daily Star A sign encouraging social distancing, one of several throughout Fleischmanns, is stapled to a utility pole. 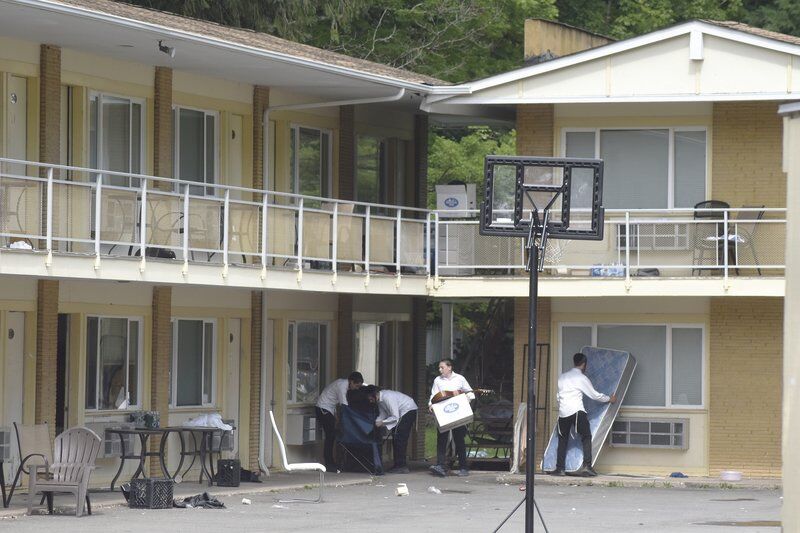 Sarah Eames | The Daily Star Young men are seen moving boxes and furniture out of the Flagstone Motel in Fleischmanns on Monday.

Sarah Eames | The Daily Star The Yeshiva Metzyoonim Dsatmar — Hebrew for "School of Excellence of Satmar" — housed in the former Fleischmanns school, is shown Monday.

Sarah Eames | The Daily Star A sign encouraging social distancing, one of several throughout Fleischmanns, is stapled to a utility pole.

Sarah Eames | The Daily Star Young men are seen moving boxes and furniture out of the Flagstone Motel in Fleischmanns on Monday.

The New York State Department of Health issued cease-and-desist orders earlier this month to six village businesses after finding them in violation of Public Health Law.

The Flagstone Motel and the Palace Hotel, both of which are owned by Brooklyn residents Avi Mendlovic and his son, Abe, were among five businesses suspected of operating as overnight camps outside the parameters of the state’s COVID-19 guidelines.

“The motels might be empty, but he put them in other houses,” said Fleischmanns Mayor Fred Woller. “Someone can rent a house and fill it with as many people as they want and claim it’s family. There’s nothing stopping him right now from doing that.”

“They appeared to have closed the buildings and dispersed them throughout the village,” said village code enforcement officer Hiram Davis. “It doesn’t really resolve the issue at hand; it just makes it harder for us to deal with.”

The mayor said he witnessed several people “scrambling” throughout the village with suitcases and bags of clothes as the state-mandated deadline approached Friday evening. Jews are not permitted to travel after sundown on Fridays, which mark the beginning of the Sabbath, explained Woller, who was raised Jewish.

The Oppenheimer’s Regis Hotel and the Yeshiva Metzyoonim Dsatmar, which is split between a camp facility and the former Fleischmanns school, were also issued cease-and-desist orders July 10, Davis said, but the owners of each complied “immediately and within the timeframe.”

“The Oppenheimers did their due diligence,” Davis said. “They never intended to run a camp — it was just when the new COVID guidelines came out that they had a problem.”

“We did everything in good faith, the way the rules were written,” said Maurice Oppenheimer, second-generation hotel owner from New Jersey.

“We’re just trying to protect the health, safety and welfare of the people,” Davis said. “We’ve been working with the Department of Health to find the best way of protecting all people involved.”

Following a July 13 meeting with Woller and Ed Bartos, the state health department’s regional environmental health director for the Oneonta district office, Davis posted bright yellow “Danger” signs on the Mendlovics’ properties, proclaiming the structures “unsafe for human occupancy or use” and declaring it “unlawful for any person to enter or occupy” the buildings.

Despite an explicit statement on the sign declaring that “any unauthorized person” removing it will be prosecuted, the one posted to the entrance of the Fleischmanns Kosher Deli — also owned by the Mendlovics — was removed later that afternoon, when a steady flow of patrons could be seen entering and exiting the building.

“I had nothing to do with removing those signs,” Davis said Monday. “He did that of his own accord.”

Davis said that to his knowledge, the Mendlovics had since submitted proper paperwork to operate the deli under the state’s COVID-19 business guidelines, but “it doesn’t make it right that they removed the signs.”

Christopher Plant, Margaretville code enforcement officer and private contractor for the Mendlovics, claimed the documents were invalid because they were issued “in response to an unsolicited, unauthorized inspection” and “no legal, written explanation” was provided.

“There’s no rhyme or reason to it,” he told The Daily Star on July 14. “It’s just a piece of paper. The building itself is fine.”

“He was out of his bounds — he has no jurisdiction in Fleischmanns,” Davis said of Plant’s involvement. “If I had been asked the same things he was, I wouldn’t have said what he said.”

Davis said he and Bartos met Monday morning with Oppenheimer to begin the process of getting the hotel back up and running in compliance with local and state guidelines.

“Everything seemed to go OK,” Oppenheimer said of the meeting and the subsequent inspection.

“If they’d be willing to work with us, we can help them get back to operating legally,” Davis said of the Mendlovics. “It’s difficult because these rules are being changed and altered as we go, but we all have to follow these same rules”

The New York State Department of Health did not respond to requests for comment by press time.

RICHFIELD - Ashley E. Fitzpatrick-Thomes, 34, of Perkins Road, Richfield, died "too young" and unexpectedly at her home on Sept. 19, 2020. Born May 6, 1986 in Stamford, Ashley was the daughter of Hadley and Janet (Vandover) Fitzpatrick. She attended Cooperstown Central School as a member of …