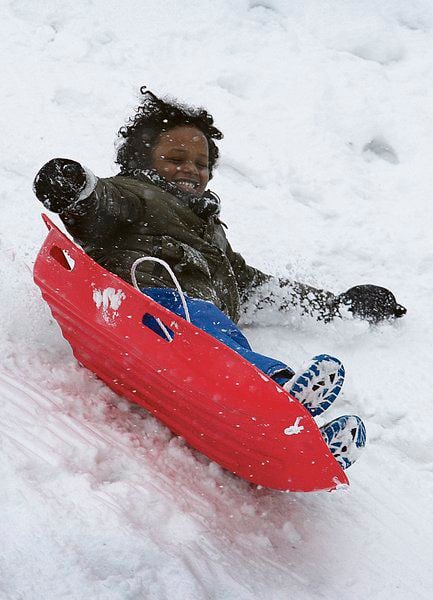 OH WHAT FUN IT IS TO RIDE Julie Lewis | The Daily Star Niman Lopez, 9, of Oneonta, sleds down the hill in Maple Street Park on Monday. 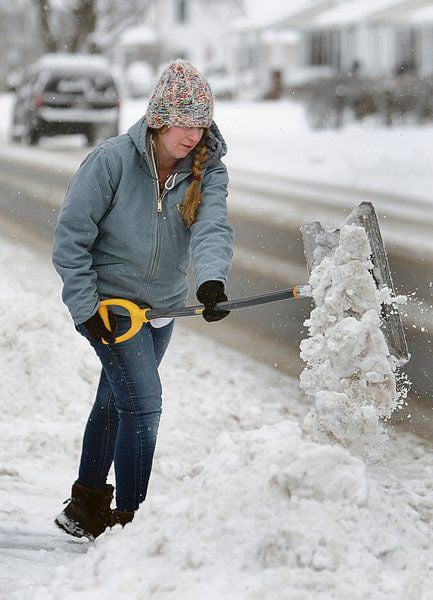 Julie Lewis | The Daily Star Lori Schaefer shovels snow from her driveway on River Street in Oneonta on Monday.

OH WHAT FUN IT IS TO RIDE Julie Lewis | The Daily Star Niman Lopez, 9, of Oneonta, sleds down the hill in Maple Street Park on Monday.

Julie Lewis | The Daily Star Lori Schaefer shovels snow from her driveway on River Street in Oneonta on Monday.

The first major winter storm of the year left several parts of the state buried in snow by Monday evening.

Dubbed Winter Storm Ezekiel by the Weather Channel, the storm is part of a low-pressure system that blanketed the Northeast throughout the weekend and into Monday.

Snowfall totals varied across the state, with the Capital region and upper portions of the mid-Hudson Valley seeing the greatest impact of about a foot and a half, according to the National Weather Service.

Earl Van Wormer III, Esperance town supervisor and chair of the Schoharie County Board of Supervisors, declared a countywide state of emergency Monday morning, urging residents to refrain from all unnecessary travel until 6 a.m. Tuesday.

Hartwick College joined SUNY campuses in Oneonta, Delhi and Cobleskill in cancelling classes Monday and opening up residence halls early Saturday for students returning to campus in advance of the storm.

A winter storm warning in Otsego, Delaware and other counties throughout New York and Pennsylvania was lifted Tuesday at midnight. The National Weather Service predicted “moderate to heavy” snowfall with total amounts of 9 to 13 inches across the region.

Local meteorologist David Mattice said the storm was comprised of two low-pressure systems: one traveling east from the Northwest, bringing what he described as a “mixed bag” of precipitation Sunday, and one moving inland from the Atlantic Ocean on Monday, drawing moisture and “bombarding” the area with snow.

Mattice estimated an additional 6 to 7 inches of snow would have fallen if not for the significant amounts of rain, sleet and freezing rain that came down Monday.

“All in all, we escaped the wrath of the storm,” he said, noting that the storm pulled away from the area as it strengthened.

Tuesday is expected to be mostly sunny, with temperatures rising into the mid-30s, according to the National Weather Service. Additional snow showers are possible Wednesday.

Closings, cancellations and delays for Dec. 3, 2019

The following closings, cancellations and delays have been announced for Tuesday, Dec. 3, 2019:

ONEONTA - Betty T. Jones, 93, passed away into the arms of her Lord and Savior on Saturday, Jan. 25, 2020, in Oneonta. She was born on April 30, 1926, in Albany, the daughter of Sherwill Sheffield and Helen (Mann) Tompkins. She graduated from Roxbury Central School in 1943. Betty lived in Gr…

EAST MEREDITH - Wanda B. Dibble, 92, formerly of East Meredith, passed away at Chestnut Park Nursing Home, Oneonta on Jan. 19, 2020, where she had been residing since April 2018. Wanda was born on Sept. 2, 1927, in Oneonta, the daughter of the late Arthur H. and Maude (Stoutenburg) Smith. Wa…

DELHI - Pamela C. Barkalow passed away peacefully on Jan. 20, 2020, surrounded by her loving family. Pam was born Aug. 25, 1961, in Delhi to Donald W. and Elsie A. Cobbe. She graduated from Delaware Academy and SUNY Cobleskill. Pam married Fred William Barkalow on Sept. 21, 1985, in Delhi at…