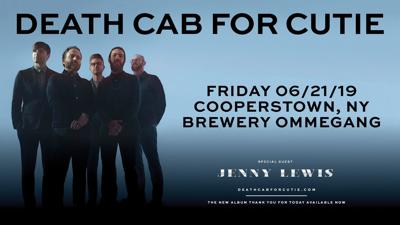 Looking for a way to kick off the first day of summer in upstate New York? How about Death Cab for Cutie and brews from Ommegang Brewery?

Washington-based group Death Cab for Cutie will be perform at Brewery Ommegang outside of Cooperstown on June 21. The five-piece American alternative rock band will take the stage directly after Jenny Lewis’ opening performance at 7 p.m.

Death Cab for Cutie was formed in 1997 from a side project and quickly grew to be one of the hottest indie rock bands in the early 2000s. The band is composed of guitarist/vocalist/pianist Ben Gibbard, bass guitarist Nick Harmer, drummer Jason McGerr, guitarist/keyboardist/vocalist Dave Depper and keyboardist/guitarist Zac Rae.

The eight-time Grammy-nominated group released its ninth studio album, “Thank You for Today” on Aug. 17, and its fifth studio album, “Kintsugi” was nominated for Best Rock Album in 2015. “Thank You for Today” received critical acclaim and debuted as No. 1 on Billboard’s Rock, Alternative and Vinyl Album charts. The group’s latest single, “Northern Lights,” hit No. 11 on Alternative radio charts and No. 1 on Adult Alternative charts.

NPR said: “For a band in its third decade… Death Cab hasn't lost its gift for pairing Gibbard's soft ruminations with propulsive arrangements that know just when to sparkle and sway. But even more importantly, Gibbard himself still sings with a sense of purpose, keenly articulating a distinct swirl of nostalgia, loss and hope for new beginnings.”

The band has continued to produce and perform music throughout the 2000s and will play iconic and world renowned venues this summer, including Firefly Music Festival the day after Ommegang and a sold-out show at the Red Rocks Amphitheatre in Colorado on June 25. The band will also play Lollapalooza in Chicago on Aug. 2, the first time since 2006.

For more information on the band, visit Deathcabforcutie.com