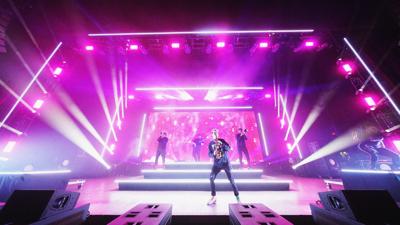 Detroit-born electronic music producer, disc jockey and saxophonist, GRiZ returned to Albany’s Palace Theatre on May 8 on his “Ride Waves” Tour. Grant Kwiecinski, best known as GRiZ, just released his highly anticipated sixth studio album, “Ride Waves,” on April 5, 2019. The 28-year-old artist has sold out shows at some of the country’s largest venues and headlined some of the biggest festivals in the U.S.

“Ride Waves” is an eclectic blend of funky electronic music, saxophone, guitar, vocals, synth and bass drops. Many artists, such as Snoop Dogg, Wiz Khalifa, Matisyahu and Bootsy Collins, are featured on this album. However, it had fewer collabs than his two previous albums.

GRiZ’s live performances and all of the production that goes into it is creates an atmosphere that all people should experience at some point in their life. Boston artist Dwilly opened the night with an EDM hip-hop set and then Portland-based Yung Bae set the mood in the theater with a funky house set. GRiZ took the stage and we heard the essential “Ride Waves” album while he also brought up some guest hip-hop artists as well as a brass section while he belted out on sax. I went with some friends who have never been to an “EDM show” and they were completely blown away!

If you haven’t caught one of GRiZ’s live shows, don’t fret, as he’s still on tour and will be bringing the funk all throughout the summer. He will be in Detroit on May 27, heading out to South Korea for World DJ Festival and then back out west to play festivals such as Bonnaroo and Firefly. From the end of June throughout mid-August, he will be playing festivals in the UK and Canada, such as We Are Electric and Shambhala and then he will return to the States to play 515 Alive, Red Rocks and will ultimately close his tour at Austin City Limits. Don’t sleep on GRiZ or his latest album, “Ride Waves!”