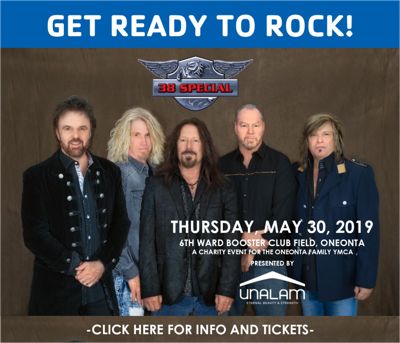 Just hold on loosely and don’t miss out on 38 Special. The group will rock out at the Sixth Ward Booster Club in Oneonta on May 30. Country stars Jackson Michelson and Dylan Schneider will also perform at the concert to help benefit the Oneonta Family YMCA. This is the second half of the organization’s Mark May Celebrity Golf and Concert Charity Event. Additionally, The YMCA will host a celebrity meet and greet with inspirational speeches by Mark May and Lou Holtz. Numerous other sports and ESPN celebrities will be there for autographs and photos from 5:30 until 7 p.m.

For more than three decades, 38 Special toured all over the world, earning gold and platinum album status. The band has headlined with classic hits such as “Hold On Loosely,” “Caught Up In You,” and “Rockin’ Into the Night.”