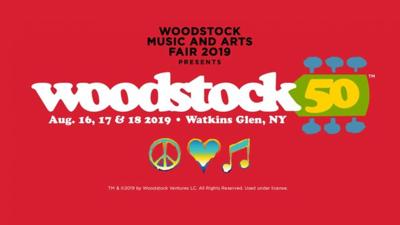 Earlier this week on Monday, the organizers of 2019 Woodstock 50 were set back again. Watkins Glen International said that they will refuse to host Woodstock 50, tentatively scheduled for August 16th-18th. Although organizers insist it is still going to happen.

With under 10 weeks to go, the organizers are now searching for a new venue to host the 50 year anniversary of “3 Days Of Peace, Love & Music”. Tentatively scheduled artists include Jay-Z, Miley Cyrus, Santana, Chance the Rapper, John Fogerty, Chance The Rapper, Dead & Company, Halsey, Imagine Dragons and a bucket load more.

Due to a late application for a “mass gathering permit”, which has still not been authorized by the New York State Department of Health, tickets are still not up for sale. Although on the website, it reads, “Tickets go on sale on Earth Day, April 22nd.” Michael Lang, the co-founder and organizer recently stated that three day passes will be under $400 and that single day tickets will now be available. A few months ago, he stated that three day tickets will be $450 and no single day passes will be available. It is still unclear if these rates reflect camping options and if these will stay the same for the new venue.

Along with a loss of a venue, the festival also lost another production company, CID Entertainment  after losing their number one production company back in April, Dentsu Aegis Network. CID Entertainment was to help provide camping and travel options as well as transportation for Woodstock 50. Since Dentsu Aegis Network pulled $17.8 million from the festival’s account in April, the organizers have been able to find new financial backers.

Bethel Woods Center for the Arts, the original site for the 1969 Woodstock Festival, will be hosting their one rendition of a 50th Anniversary of Woodstock with the showing of the film “Woodstock” on August 15th. Ringo Starr and His All Starr Band along with the Edgar Winter Band and Blood, Sweat & Tears will be performing August 16th. Santana and The Doobie Brothers will take the stage on August 17th and John Fogerty will be performing on August 18th with the Tedeschi trucks Band, Grace Potter and more!

This article will be updated as more info is revealed.