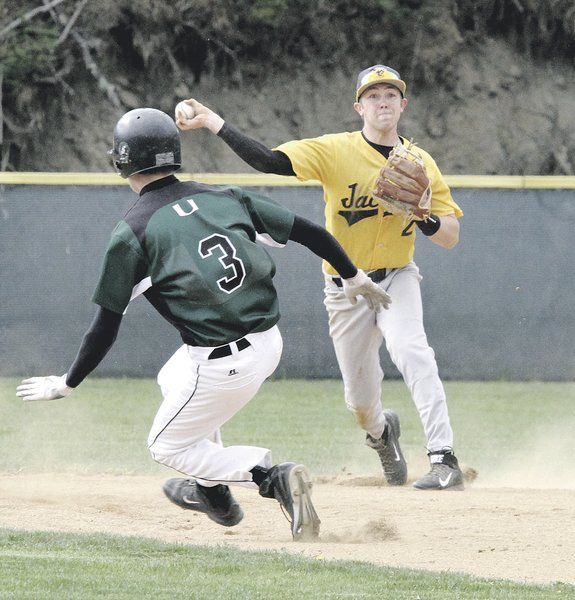 CHERYL CLOUGHOneonta High’s Connor Tavarone throws to first for an out while Unatego’s Jared Jones runs to second during Wednesday’s non-league game at OHS. The Yellowjackets won, 9-2, to improve to 14-4 this season. They’ll play a Southern Tier Athletic Conference semifinal against Vestal at 1 p.m. Saturday at Maine-Endwell. 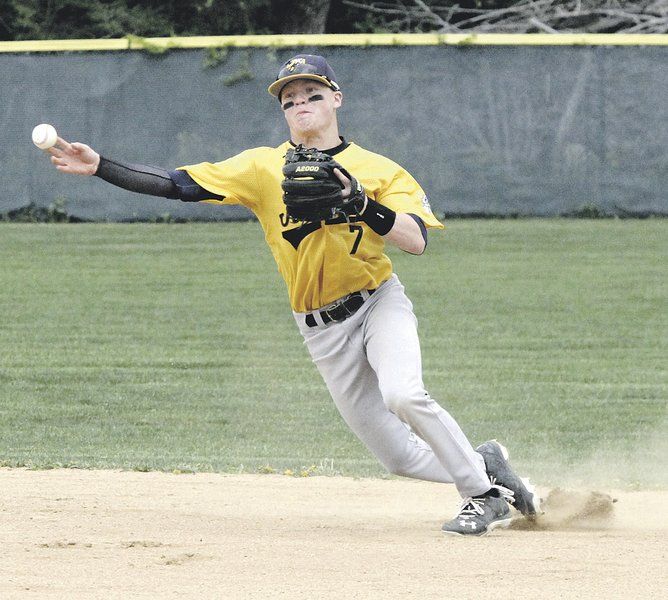 CHERYL CLOUGHOneonta High’s Collin Neer throws to first for an out against Unatego during Wednesday’s non-league baseball game at OHS.

CHERYL CLOUGHOneonta High’s Connor Tavarone throws to first for an out while Unatego’s Jared Jones runs to second during Wednesday’s non-league game at OHS. The Yellowjackets won, 9-2, to improve to 14-4 this season. They’ll play a Southern Tier Athletic Conference semifinal against Vestal at 1 p.m. Saturday at Maine-Endwell.

CHERYL CLOUGHOneonta High’s Collin Neer throws to first for an out against Unatego during Wednesday’s non-league baseball game at OHS.

Key two-out hits by David Wessells and Casey Bishop led Oneonta High to a 9-2 non-league baseball victory over visiting Unatego, which was held to five hits by four Yellowjackets pitchers.

“We got some guys some work today,” said OHS coach Joe Hughes, who had error-free defense behind winning pitcher Noah Sheehan and relievers Matt Bitzer, Collin Neer and Bennett Eggler. The quartet combined for six strikeouts and two walks.

Midstate Athletic Conference 1-4 Tournament semifinalist Unatego took a 1-0 lead in the first inning, but Oneonta responded with two runs in the second.

Catcher Dalton Carver singled and Casey Bishop walked before both advanced on Brandon Corna’s deep groundout to first base. Wessells later hit a two-run double to the left-center field gap off of losing pitcher Jared Jones to give OHS the lead for good.

The Jackets (14-4) scored another run in the third, but the Spartans kept pace with a run in the fifth to pull to 3-2. Bishop then sparked a three-run fifth for Oneonta with a two-out, two-run single to right-center field. OHS followed with three more runs in the sixth for the final margin.

Wessells finished with two hits and two RBIs for Oneonta, which will play a Southern Tier Athletic Conference semifinal against Vestal at 1 p.m. Saturday at Maine-Endwell. The other semi pits Corning against Susquehanna Valley at 10 a.m. Saturday at M-E, which will host the championship game at 4 p.m. Admission to the STAC tournament is $5.

“We’ve played our third game in three days and finished the regular season with a tough stretch of games,” said Hughes, whose team swept SV during the regular season but has not faced Vestal or Corning. “Now we get to go back to practice Thursday and Friday and get ready for the STAC championships.”

OHS is seeking its first STAC title since winning back-to-back crowns in 2011 and 2012.

Unatego, which committed six errors Wednesday, closes its regular season at 5 p.m. Sunday at Doubleday Field in Cooperstown with a non-league game against Kenmore West.

Reilly Hall struck out nine and walked one in a five-hitter to lead host Cooperstown to a Center State Conference victory. Hall also went 3-for-3.

Zach France doubled twice for the Hawkeyes, who received a two-run single from Dante Wellman in the third inning. France and Hall scored on the hit.

Carson Pochkar doubled twice, drove in three runs and scored in a 3-for-4 effort that helped host Worcester beat Tri-Valley League rival Gilbertsville-Mount Upton as the Wolverines earned their first victory of the season in their final game.

Nate O’Hara had two hits to pace the Raiders, who scored seven times in the fourth to take a 7-5 lead but gave up nine runs over the last three innings.

Matt Anderson struck out the final batter to secure Stamford’s non-league victory over Delaware League rival South Kortright, which scored twice in the bottom of the seventh before stranding two runners.

Tom Newman’s RBI single capped the scoring as Anderson got out of the jam to earn a save and make a winner out of starting pitcher Geoff Mattice. Anderson struck out seven and scattered three hits in three innings of relief. Mattice, who left the mound with a 3-1 lead, struck out two and gave up two hits in four innings.

Damon Hill hit a two-run single in the second to give Stamford (7-4) a 3-0 lead. The Indians, who hosted the game but played as the visitors, stretched their lead to 5-1 with a pair of two-out runs in the seventh. Kevin Clark doubled off of losing pitcher Griff Metzko to put runners at second and third for Stamford, which scored on an error before Glen Cioccari singled in its final run.

Metzko, who tripled, struck out 13 and walked six in a five-hitter for the Rams (7-5), who will compete in the Section Four Class D Tournament next week.

Jacob Russell and Lyman Townsend also won singles matches in straight sets for Cooperstown (12-0), who got doubles victories from the teams of Tyler Bertram and Pierce Snyder, and Grant Davine and Max Ofer.

Anania and Bertram were unbeaten this season.

“I think we’re stronger than we were last year,” said Bertram’s father and Cooperstown coach Dave Bertram, whose team will compete in the Section Three Class C tournament Monday at Utica Park Courts. “Sectionals are really going to come down to the first-round matches. If we’re playing well and hitting the ball well, we’ll put ourselves in a good position.”

Tyler Bertram and Snyder are the defending Section Three Class C first doubles champions, while teammates Will Cadwalader and John Kelley will look to protect their second doubles title from a season ago.

“It was a really fun year and were really looking forward to sectional play,” Dave Bertram said.

Seamans will follow his first DL title as the top singles seed for the Section Four Class C-D East Tournament, which runs Thursday at Camp Starlight in Hancock.

Rasmussen and Pelham are the No. 1-seeded tandem for doubles play, which also features fourth-seeded Noah Dougherty and Russell Storey of Andes, sixth-seeded Sanchez and Ancona, seventh-seeded Andrew Burpoe and Riley Howland of Sidney, and eighth-seeded Spenser Stevens and Thomas Petrutoni of Bainbridge-Guilford.

All seeded players earned first-round byes for the C-D East sectionals, which will be followed by the Delaware League girls singles championship match between Davenport’s Lindsey Zeisler and Rae Goss of Hunter-Tannersville.

Jonah Herold earned the highest seed for an Oneonta High player for the Section Four Class B Tournament, which runs Thursday and Friday at Wilber Park.

Norwich’s Alexander and Colin Stewart are the top doubles seed, followed by John Munley and Stephen Pham of Maine-Endwell.

Julie Ford and Kristin Ratliff won two events apiece for Cooperstown’s girls, who took first in the 1,600 and 3,200 relays en route to a tight victory in a four-team Center State Conference meet at Westmoreland.

Ford won the long jump at 14 feet, 11.5 inches and was the top triple-jumper at 33-2.5 for the Hawkeyes, whose 81.5 team points were two better than runner-up Westmoreland. New York Mills scored 44 points for third place, followed by Hamilton with 32.

“We knew we had to do well in the jumping events and Julie Ford was a key factor,” said Cooperstown coach Connie Herzig, who also got a second from Ford in the discus. “Winning two events and placing second in another was major.”

Kate O’Handley, Mary Kennedy, Natalie Shieber and Samantha Fanion won the 3,200 relay in 11:05.1 for Cooperstown, which also got a first from Fanion in the high jump (5-0).

“We knew going in it was going to be very close, so we knew we had to win the relays,” Herzig said. “We had set it up so that we would win the two longer relays, but they had some good sprinters (for the 400 relay).”

Cooperstown will send a handful of athletes to the Eddy Meet, which starts at 9 a.m. Saturday at Schenectady High. After that, the Hawkeyes will turn their attention to the Center State Conference Championships, which start at 3:30 p.m. Tuesday at Sauquoit Valley.

“We’ll see (Westmoreland) again next Tuesday in the championship meet,” said Herzig, adding that her team and the host school likely will finish as the top two teams. “We’re going to fight for first.”

Results from Wednesday’s boys meet were not available at press time.

Winning pitcher Monica Ridgeway turned a double play in the top of the seventh then scored the winning run in the bottom frame as host Worcester nipped Gilbertsville-Mount Upton in the Tri-Valley League.

Rylee D’Addezio doubled to lead off G-MU’s at-bats in the seventh and Ridgeway hit the next batter to give the Raiders runners at first and second. Ridgeway got out of the jam by inducing a popout to catcher Courtney Hogan and a line drive back to the circle.

“Kelsey Ross hit a screamer right back to Monica,” Worcester coach Jim Kenyon said. “She caught it and threw to first for the double play.”

Ridgeway followed with a leadoff double down the left-field line in the bottom of the seventh and took third when the relay throw missed the cutoff. With the Raiders infield playing in, Brigid Kennison grounded the ball to the third-base side.

“The pitcher actually fielded the ball, but Monica’s just too fast,” Kenyon said. “She was about halfway down the line anyway, so she just took off.”

Ridgeway struck out four, walked one and hit a batter in a five-hitter. She also had two doubles, a run and an RBI for the Wolverines (4-10, 4-8), who got two two hits from Kennison and a double, a run and an RBI in a 3-for-3 effort from Michaela Ralph.

Katie Schultes went 2-for-3 with an RBI for G-MU, which got a double from Ross and four strikeouts and one walk in a 10-hitter from freshman pitcher Scarlett Newman.

“This was a nice win for my seniors to finish up,” Kenyon said. “We won two in a row to finish the season.”

Torri Halaquist and Cassidy Newman had hits for Unatego, but the host Spartans fell in a non-league game between two Midstate Athletic Conference teams.

MaKenzie Stiles struck out 12 and walked two in a two-hitter for Deposit (17-3), which received a two hits and two RBIs from Aubrin Smith.

Teddy Trosset shot a 6-over-par 41 for medalist honors on the front nine of the Leatherstocking Golf Course, leading host Cooperstown to a 206-249 victory over Adirondack.

Tanner Clinton contributed a 50 for the Hawkeyes (5-5), who visit Adirondack on Thursday.