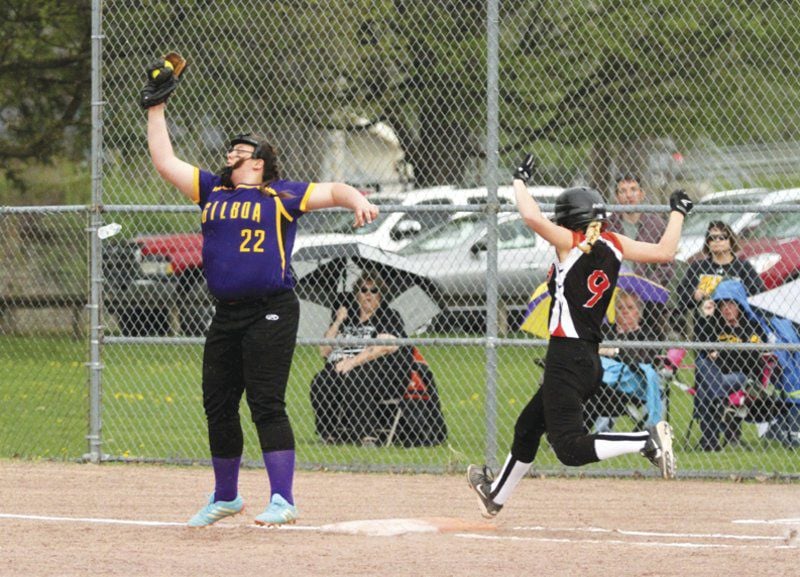 CHERYL CLOUGH Roxbury runner Claire McDaniel reaches first safely as Gilboa's Kelli-Jo Vanvalkenburgh has to come off the bag to catch a high throw in the Delaware League championship game won by the Rockets, 14-4, at Neahwa Park in Oneonta on Thursday. 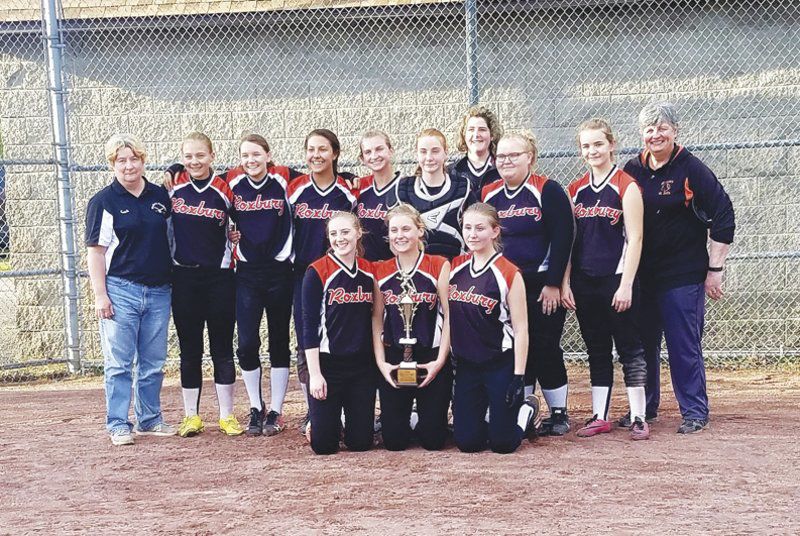 CASSANDRA NEGLEY | THE DAILY STAR The Roxbury Rockets softball team poses with its Delaware League championship trophy after winning the title game on Thursday at Neahwa Park in Oneonta.

CHERYL CLOUGH Roxbury runner Claire McDaniel reaches first safely as Gilboa's Kelli-Jo Vanvalkenburgh has to come off the bag to catch a high throw in the Delaware League championship game won by the Rockets, 14-4, at Neahwa Park in Oneonta on Thursday.

CASSANDRA NEGLEY | THE DAILY STAR The Roxbury Rockets softball team poses with its Delaware League championship trophy after winning the title game on Thursday at Neahwa Park in Oneonta.

ONEONTA — Rain continued to slant into the batter’s box and fans around Ted Christman Field at Neahwa Park held their umbrellas against the wind.

Despite a sunny day in the mid-60s, the spring of 2018 reared its head again Thursday afternoon with rapidly moving gray clouds and a quick rain shower that Roxbury and Gilboa-Conesville looked poised to play through.

It wasn’t until thunder roared just before Roxbury’s Brianna Cross took first on a bases-loaded walk, pushing a second Rocket run home, that the Delaware League championship was put on hold for 30 minutes for a weather delay.

The Rockets (8-0 DL) had waited a couple of years to be back in this game. An extra 30 minutes did them little harm, as they took the two-run lead and propelled it to a 14-4 championship victory.

“[The key was] just staying in the game. Consistency,” said Roxbury coach Jane Ware, whose team scored at least two runs in all but the final sixth inning.

Both teams came into the game undefeated in DL play in an odd scenario caused by the weather-hectic spring. They matched up earlier this season, but the game was suspended due to weather with a 2-2 tie. Delaware League coordinator Jim Adair said though that game had yet to be made up, the two would have ended up in the first and second spots either way.

And the championship game went on.

Roxbury, which won the coin toss to play as the home team, scored 14 runs on 15 hits and 10 errors while starter Claire McDaniel, with Cross behind the plate, quietly held Gilboa-Conesville to two hits.

Emma Hynes was a single short of the cycle batting clean-up, going 3-for-5 with an RBI and three runs scored.

The lefty began the game with a fly ball to shallow left field on which two fielders failed to communicate. She hit a home run in the second inning that flew by to the left of the center fielder, making it 5-0. She followed it up in the third with a triple that brought home Lacey German’s inning-opening hit.

In the fourth she had her second shot at a single, sending a hard hit up the right line that Gilboa’s first baseman handled herself for the inning-ending put-out.

And in the sixth Hynes hit a line drive double to right field, to the other side of the center fielder.

“If the team is up, she hits,” Ware said. “She’s definitely, if the momentum is moving she hits hard.”

The junior said she was excited to play all day because it had been a few years since the team was playing for the title. But she said she wasn’t cognizant of a cycle being in play. On her double, another deep hit to the outfield, she could have tried for third but held up.

“[I was] focused on getting my teammates in (and) helping to score runs,” she said.

The Rockets offense was aided by errors, most of which came on easy outs at first base, but starting early they utilized hard hits and smart softball with proficiency.

To get Roxbury started, Lacey German hit a game-opening single to shallow right prior to any raindrops. Katrina Davis took the first pitch for a sacrifice bunt, sending a slow roller up the left foul line. German, an eighth-grader, went first to third with little hesitation as no one took the bag.

“We preach it in practice, always. Look where the third baseman is,” Ware said.

McDaniel, who had two RBIs, brought in the run and reached base via error when the first baseman’s foot came up off the bag. Hynes reached on an error and Erin Garza worked the walk for a 2-0 lead before the delay.

With sun peeking back through shortly later, Gabby Garofolo made it 4-0 with a double to left and Rebeka Stern had a two-out single to make it 5-0. They batted 11 in the inning.

Roxbury scored three in the second inning, two of which reached on errors.

The Wildcats (10-2, 7-1 DL) had their first hit in the top of the third on an RBI-single by Brooke Shultis. They earlier scored a run off an inning-opening walk by Elizabeth Cherry, who scored on a put-out at first, and later on a bases-loaded walk to Samantha Lee that brought in Shultis.

Roxbury answered with two runs on Hynes’ triple and Garza’s RBI-single. The Wildcats made it 10-4 with a run scored by Adriaonna Doyle, who reached on a two-out error.

The Roxbury defense shut it down the rest of the way and McDaniel allowed only one more hit, a lead-off double in the sixth by Cherry. She was tagged out stealing second around two ground outs.

Third baseman Garza snared a line drive for the first out of the seventh, and German caught a low-arc hit to shallow left field near the foul line she chased down from shortstop. She then caught a pop-up to end the game.

The Rockets furthered their lead with two runs in each of the fourth and fifth innings.

German hit 3-for-4 in the leadoff spot, scoring three runs with a walk and an RBI on a single in the fourth that scored Reyna Lewis. Lewis moved over on a sac bunt, and German moved over on an sac bunt to later score on a hard hit by McDaniel up the right side.

In the fifth, Cross hit a sacrifice fly to right field that Hynes came home on after her triple. Garofolo reached on an error at first and scored on a wild pitch.

The Wildcats prevented any more runs in the final inning by catching a runner stealing second.

Thunder 🚨🚨
Game suspended with one out in the bottom of the first. Roxbury leads 2-0.