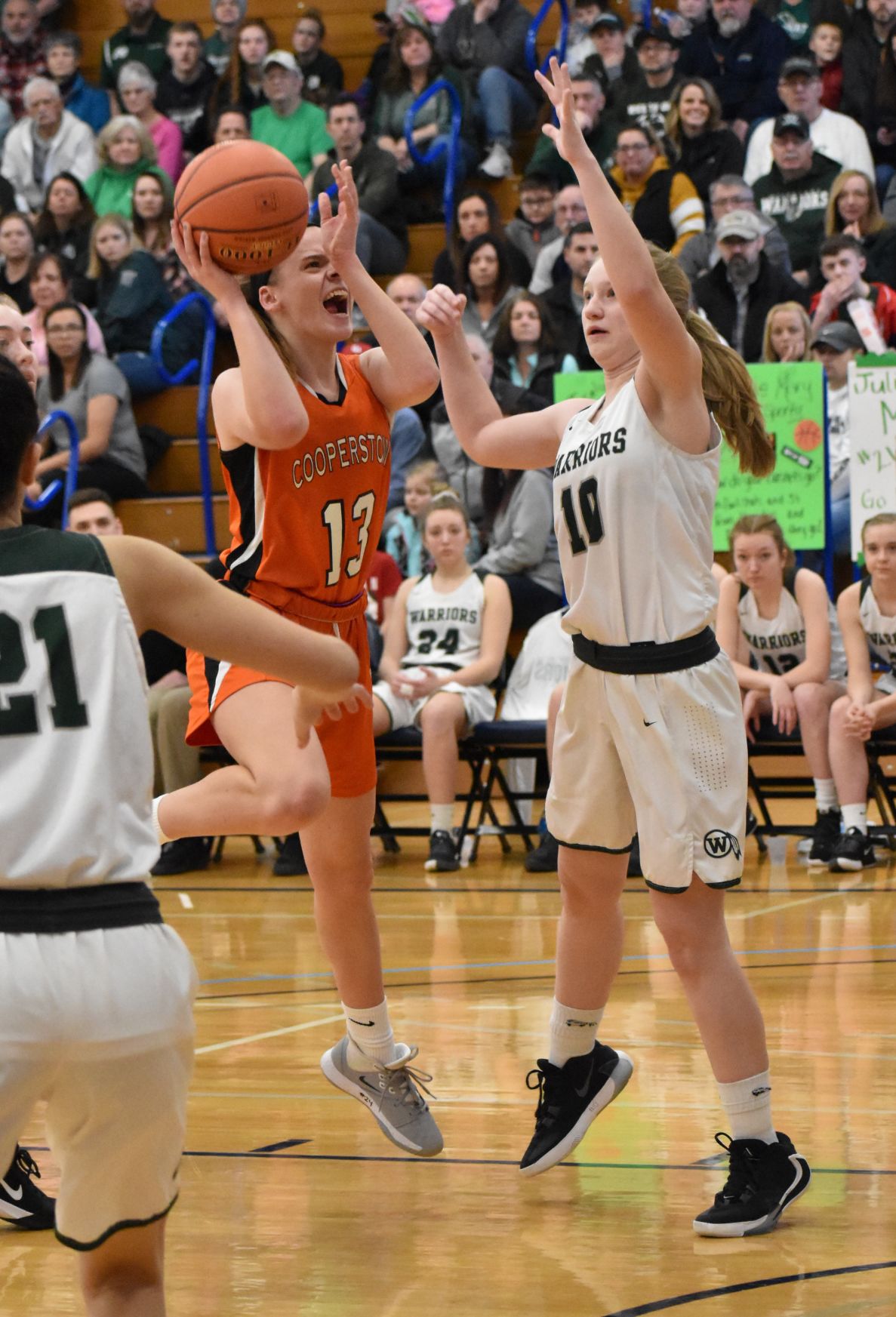 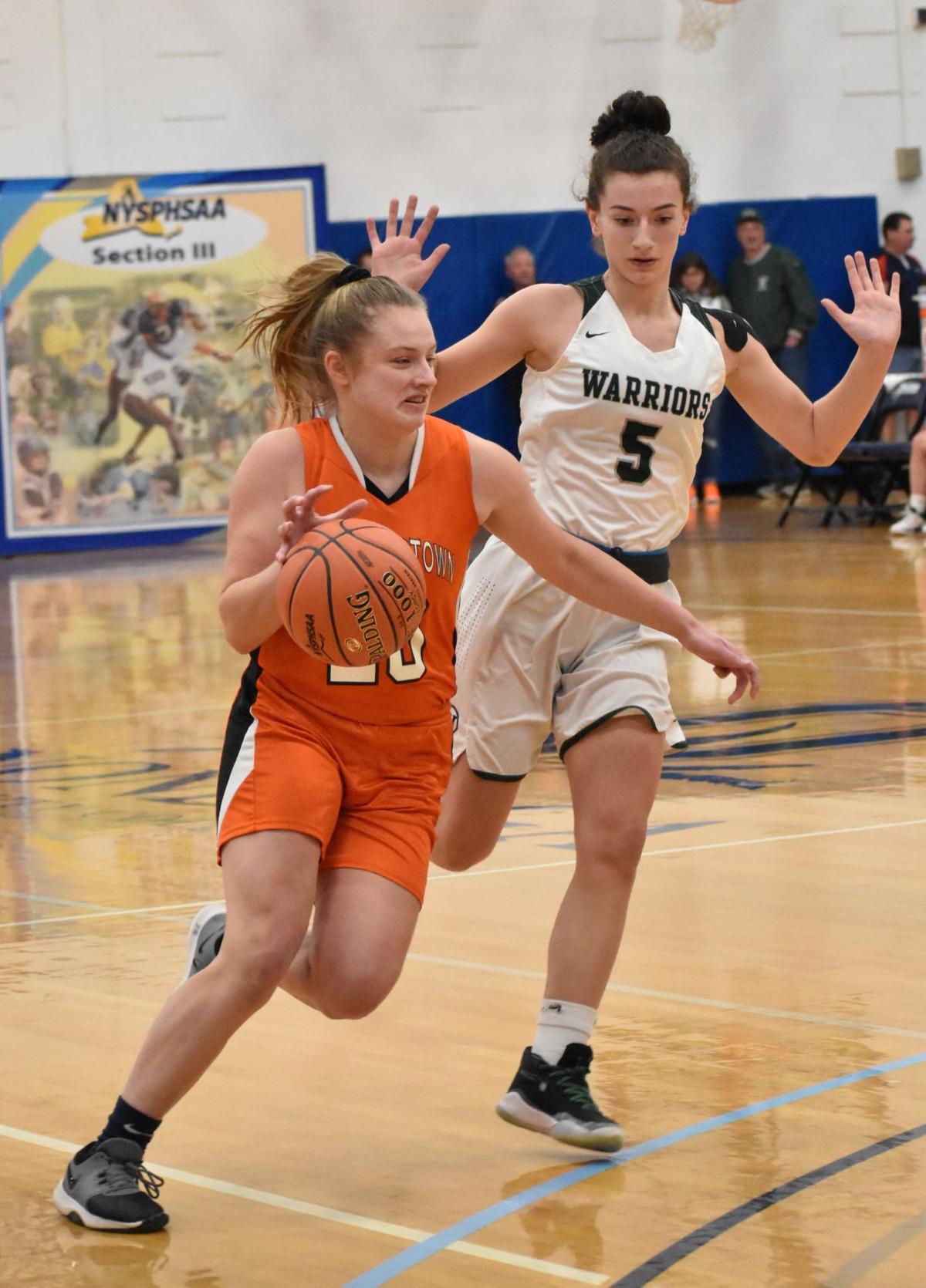 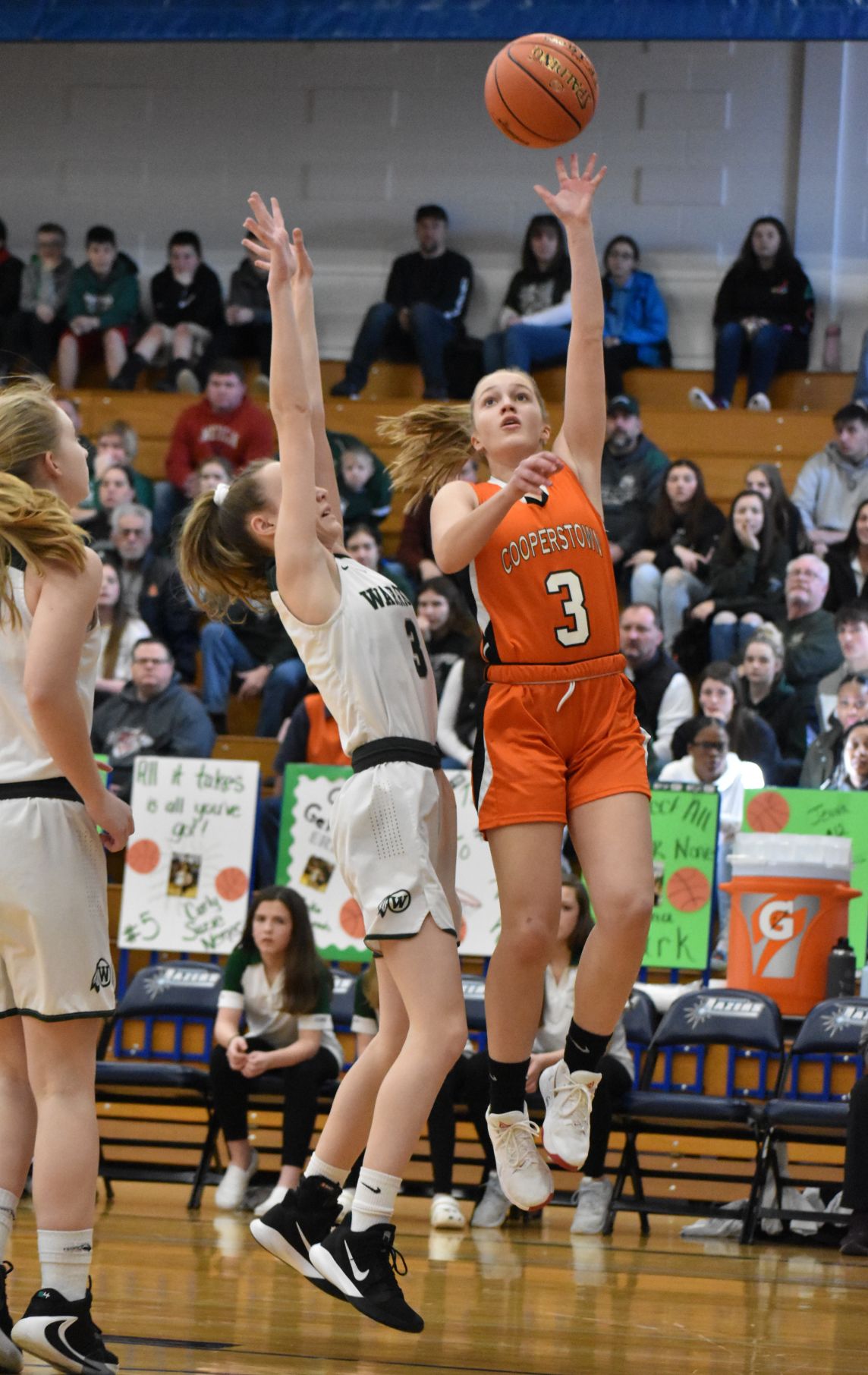 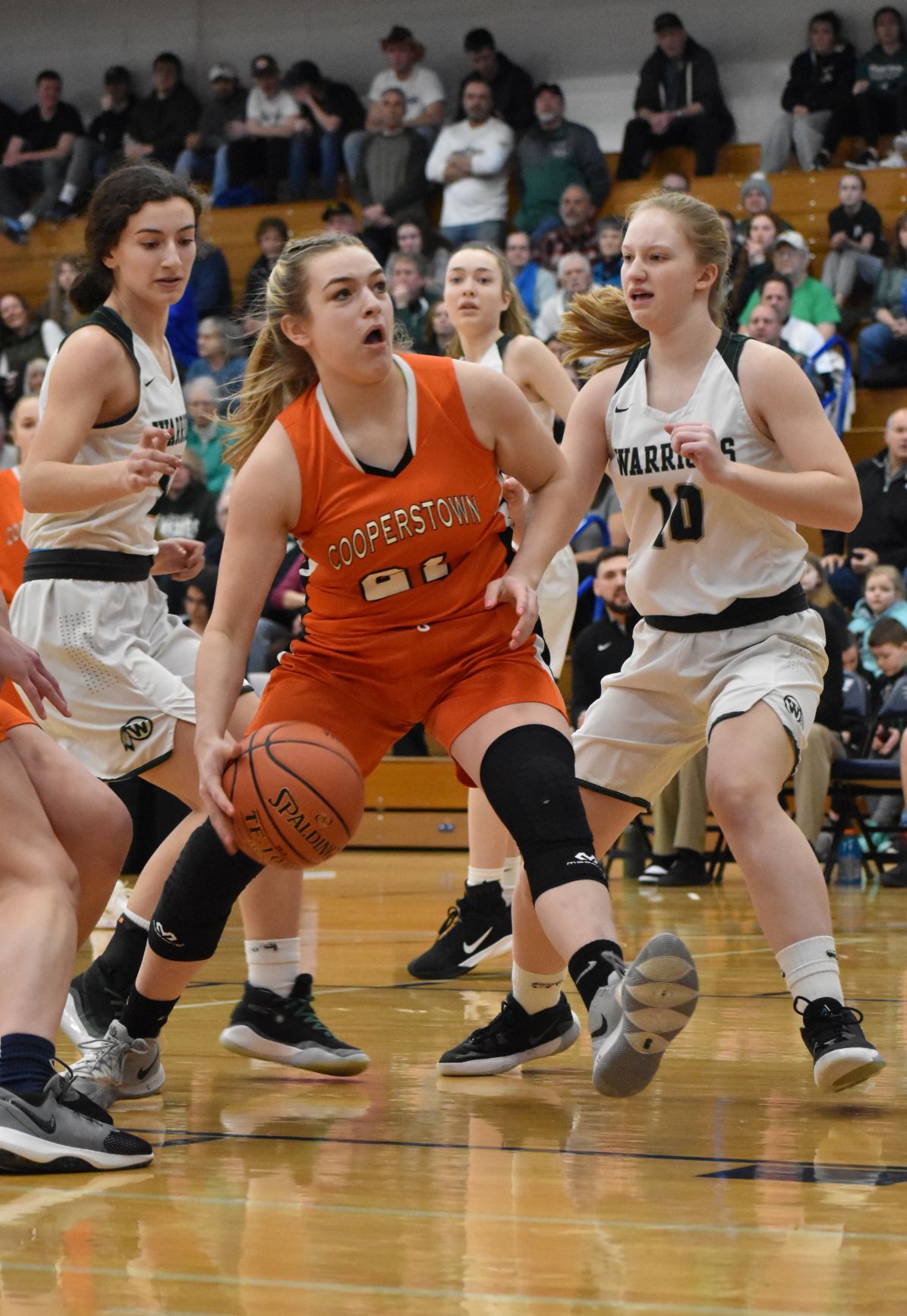 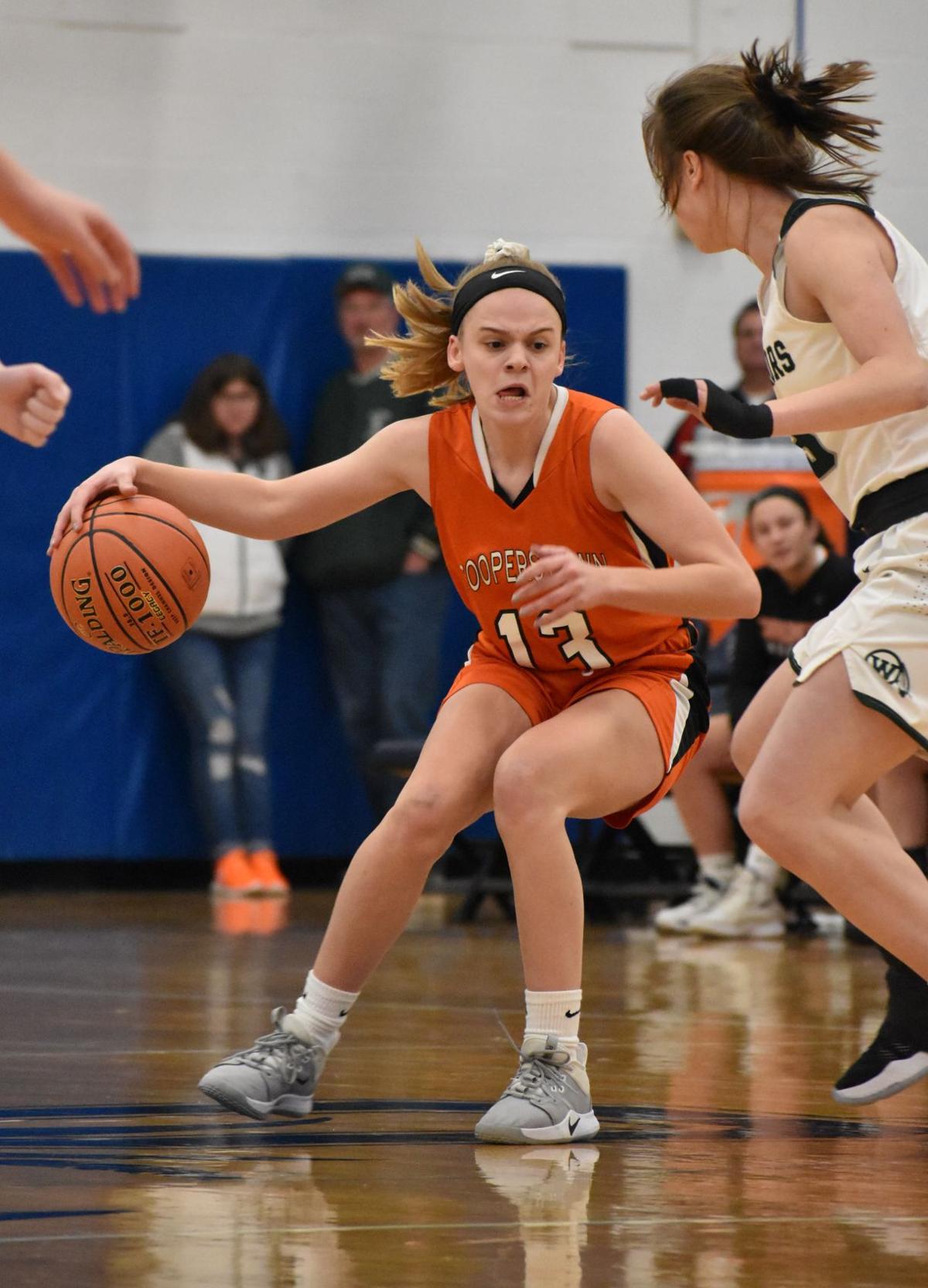 Cooperstown's Kate Donnelly dribbles out of pressure during the first half of the Section III Class C girls basketball final Saturday, March 7, at SRC Arena. 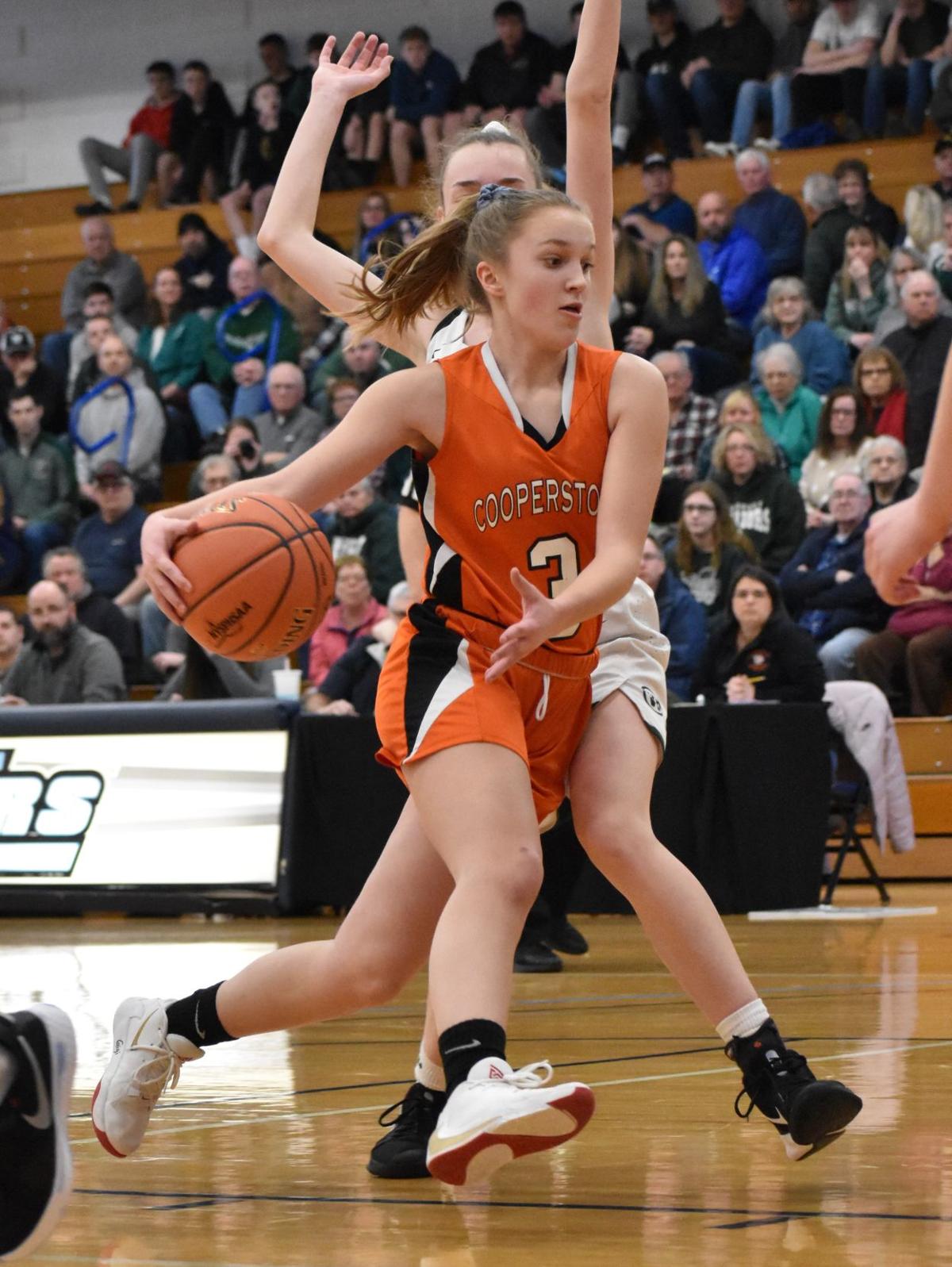 Cooperstown's Ashley Kiuber takes the ball to the basket during the first half of the Section III Class C girls basketball final Saturday, March 7, at SRC Arena. 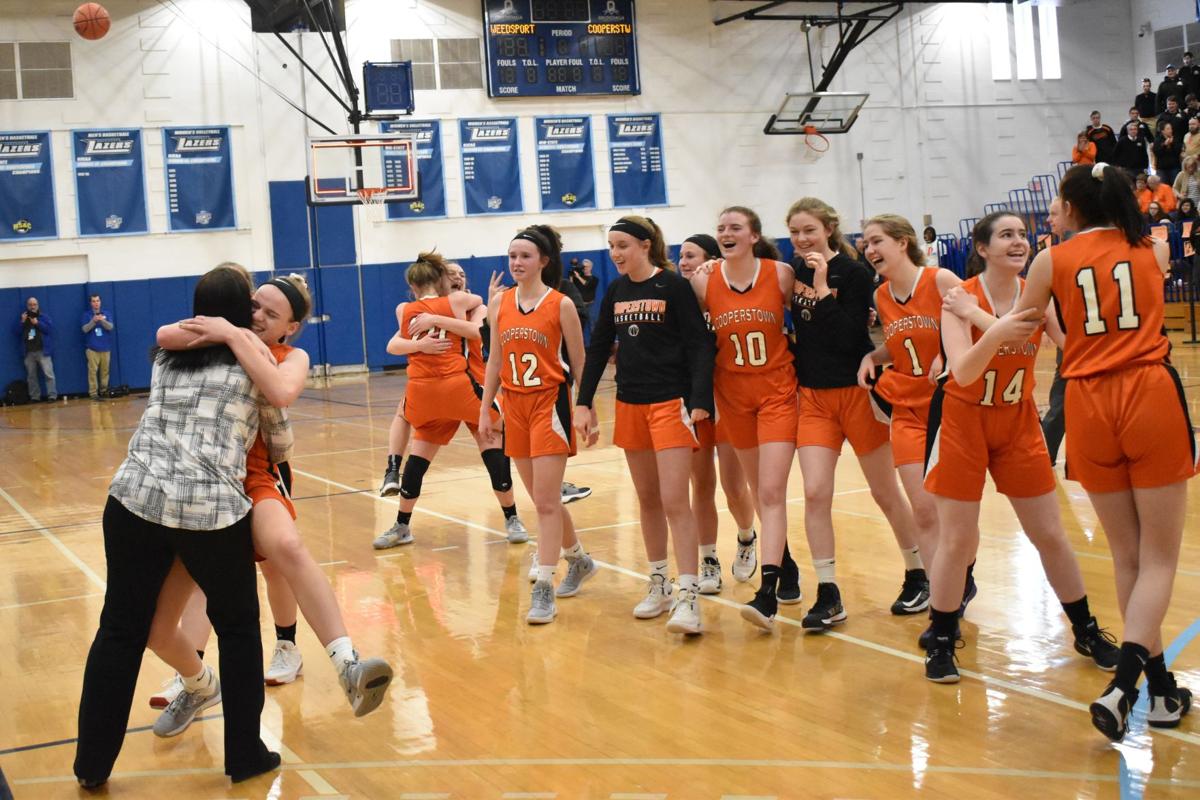 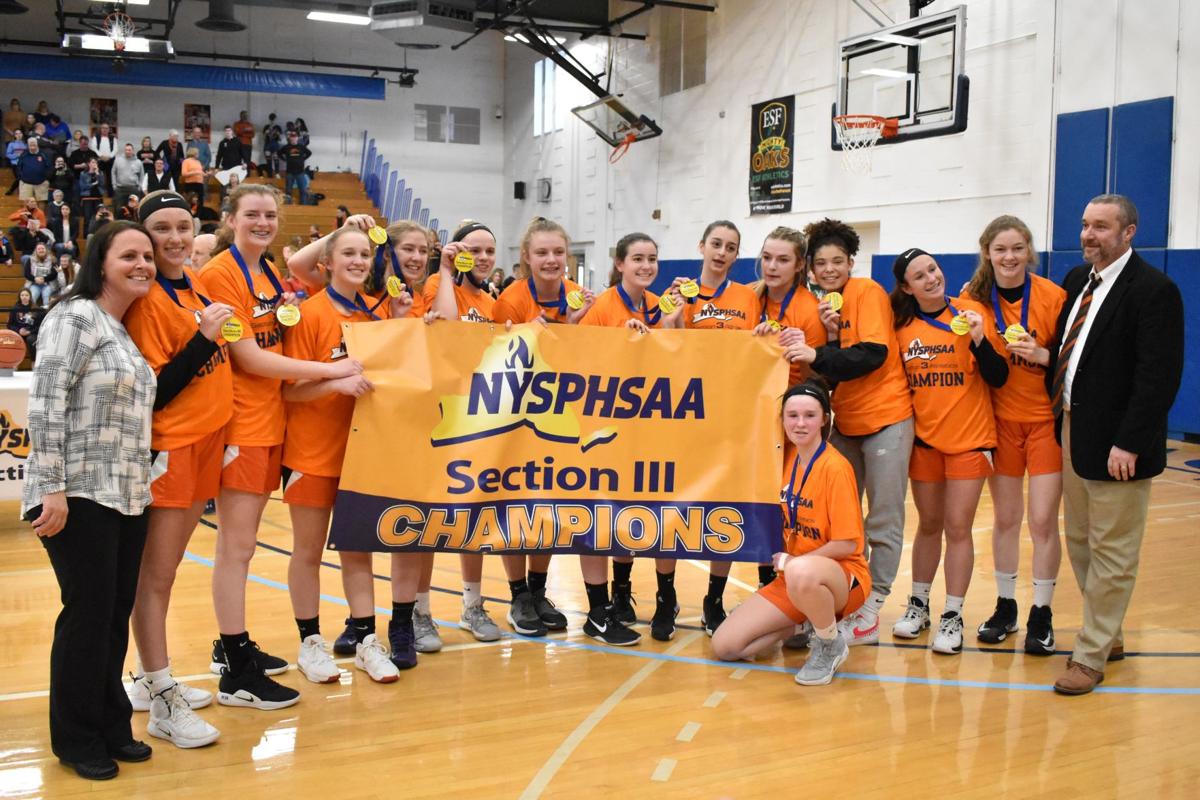 Cooperstown's Kate Donnelly dribbles out of pressure during the first half of the Section III Class C girls basketball final Saturday, March 7, at SRC Arena.

Cooperstown's Ashley Kiuber takes the ball to the basket during the first half of the Section III Class C girls basketball final Saturday, March 7, at SRC Arena.

SYRACUSE — When top-seeded Weedsport erased Cooperstown's hard-earned, six-point halftime lead early in the third quarter, the Hawkeyes leaned on the little things to regain the momentum.

Oh, and 16 second-half points from Piper Seamon didn't hurt, either.

"I would never say we had it in the bag in the first half because you could say that about all of the games we've played this tournament. That's never the case. You have to keep going and can't expect anyone to give up, because we never give up," Seamon said. "I was not going to lose. I just did not want to lose at all. I was going to do anything to win."

A 3-pointer from Emma Stark and an old-fashioned three-point play by Suzie Nemec for Weedsport evened the score at 22 after just 93 seconds of the third quarter. Seamon and Stark traded triples to tie it at 25 before Ashley Kiuber's steal in the backcourt produced an easy deuce and started an 11-2 Cooperstown run to end the period. Kiuber had two more baskets and Dani Seamon had one in the run, before Piper Seamon capped the quarter with another three.

The Hawkeyes led, 36-27, after three periods. Weedsport scored just five points in the third after the opening burst, missing several shots from in close in a continuation of a trend from the first half. Niles credited Cooperstown's help defense, especially that of Gabby Woeppel, for making even the easy things difficult for Weedsport.

"The thing about coaching is that whatever you complain about the most starts to change at some point," Niles said. "So we showed (help defense) on tape and drilled it in practice. Then, I would say probably four games ago, Gabby leaped out of herself, was blocking shots and rebounding like a stud."

"Her turning it around around the rim, her as a help defender, started the dominoes in terms of weak-side rebounding and help defense," he continued.

"It's the help defense, and we are always cheering each other, saying 'I've got so-and-so,' switching on screens, just communicating really well," Woeppel said.

The Hawkeyes carried the momentum into the fourth, as Piper Seamon hit another three to open the frame. She dished out an assist to Kate Donnelly in transition and finished a tough, over-the-head layup in transition with a foul to extend a 43-27 lead.

Weedsport showed signs of life midway through the frame, but another 3-pointer from Piper made the gap 17 with 2:30 left. Lindsey Trosset scored four points, Woeppel had two and Anna Lambert had two as the Hawkeyes closed it out.

Seamon scored all 16 of her points in the second half, 12 of them coming on four 3-pointers, to pace the Hawkeyes. Kiuber totaled 11 points and Donnelly had nine.

Woeppel and Trosset each finished with six, while Dani Seamon, a freshman, had four along with an excellent rebounding performance in a starting role for Meagan Schuermann, who missed a second consecutive game for disciplinary reasons.

"(She's been) brilliant. Both weekends. She's cleaning the glass, she's like the Windex woman," Niles said of Dani Seamon. "She defends screens and boxes out and battles in the post beyond her years. We're blessed. She's stepped right in and it was great to watch."

Donnelly landed on the all-tournament team, while Piper Seamon was named the tournament's most valuable player.

The win gives the Hawkeyes a second consecutive section title and fourth in six years. Despite losing a talented class of seniors from last season's state quarterfinal team, Niles' team will again have the chance to play for a spot in the state final four.

"At some level it's organic. It's not like plug-and-play Legos, the kids have to respond at some level and the other thing that's happening lately is the kids are realizing they are contributing to something beyond the season they are in, that there's some legacy," Niles said. "It's 'I know if I play my role, then I get a larger role.' Then, I don't want to say they're expected, but they are allowed to contribute."

LAKELAND, Fla. - Alice A Wells, 94, of Lakeland, Florida, passed away at Lakeland Regional Medical Center on Saturday, July 25, 2020. She was born on Jan. 6, 1926, in Springfield, Massachusetts, the only child of August Asplund and Hulda Mangs. The family moved to Sidney, when she was 2. She…