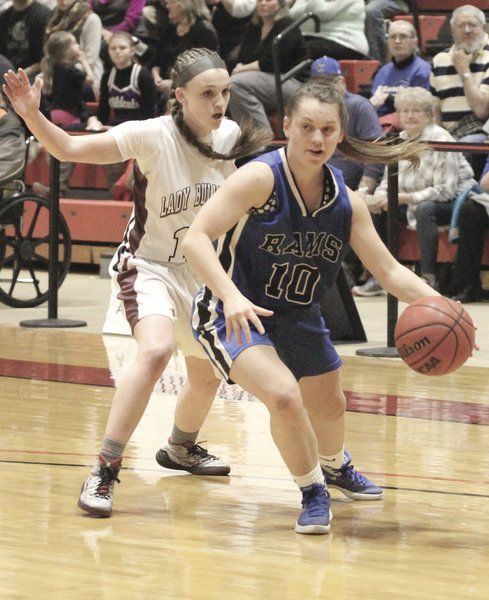 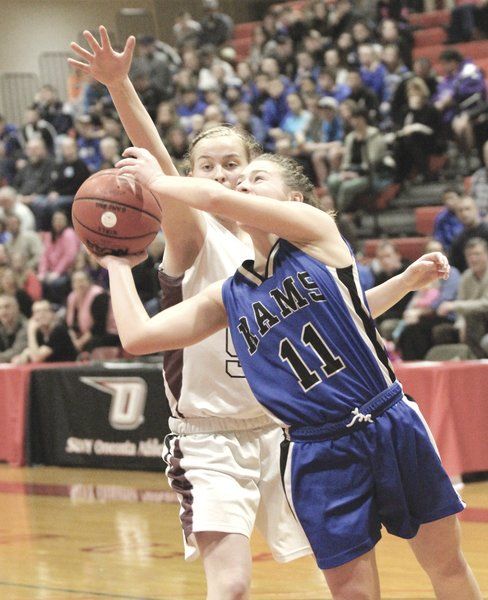 ONEONTA – Delhi did what?

Kaitlynn Finch hit three three-point field goals in the second half, Logan Bruce made the back end of a two-shot free-throw opportunity with 1.1 seconds left in regulation, and the Bulldogs forced a pair of turnovers inside the final minute of overtime for a 56-54 girls basketball victory over South Kortright in a Section Four Class D semifinal Wednesday at Oneonta State.

That’s South Kortright, as in defending sectional champion South Kortright, which returned virtually everyone from a team that ran the table before falling to Heuvelton, 61-54, in the Class D state title game last season.

Technically, Delhi’s win doesn’t count as an upset as the Delaware League champion Rams (20-3), whose other losses this season came against defending Class C state champion Cooperstown, entered the Section Four Class D Tournament as the No. 3 seed.

“It’s very shocking because we said if we win this game, we’re going to shock the world,” said sophomore point guard Bruce, who drew a foul on Brianna Laing with a drive through the paint to set up her tying free throw. “I don’t know anybody besides our team who thought we would even get within single digits with South Kortright.

“They went to the state championship last year and they had the crowd and everyone,” she continued. “But I believed in our team the whole time. One through 14, the players we have, if it wasn’t for every one of them, we wouldn’t have made it this far.”

After the crowd settled down, Bruce fell short with her first attempt. SK coach Josh Burroughs then called timeout to give her 30 more seconds to think hard about the next one.

“I actually liked that because it calmed me down,” said Bruce, who returned to the line with Delhi’s season in her hands and swished it. “My teammates were saying, ‘You can do this. You’re going make this shot.’ I think that lifted my spirits and stopped my shaking.”

Olivia Wakin needed 9 seconds to put the Bulldogs (20-3) ahead in the extra period, drawing a foul on her seal-and-spin lay-in from the right block for a 51-49 edge that marked Delhi’s first lead since 10-9 with 3:49 left in the first quarter.

Wakin missed the ensuing free throw and SK’s Brianna Laing followed with two layups on drives through an air-tight left seam, the latter an and-one that put the Rams up, 54-51, with 2:46 remaining.

Bruce then made another free throw to spark a 5-0 counterattack that featured a putback by Allison Hannigan and Finch’s runner down the right side to cap the scoring. What might be considered the longest minute in Delhi history came next as neither team’s defense budged thereafter.

Lexi DuBois shot through the middle of the paint to intercept a press-breaker pass in Delhi’s end and was fouled in the process. She missed both, with Hannigan — the tallest player on the floor — rebounding the second.

SK let the clock go, got a key rebound from Savannah Hobbie on a miss by Addy Sackett and called timeout with 9.1 seconds left. The Rams then inbounded to their hottest shooter, Laing, who sent the ball back to team scoring leader Tori Rockefeller near the left corner.

“Down the stretch, I thought Bri Laing did a great job for them. She was phenomenal,” said Delhi coach Todd Bruce, who doubles as Logan’s father. “We tried to take her and Tori away on the inbounds pass and then on the side-out, we were going to make somebody else shoot besides those two.

They did as Rockefeller stumbled while trying to emerge from a suffocating double-team in the corner and turned the ball over.

Todd Bruce then called timeout and SK’s Sam Acuna quickly fouled Logan Bruce with 1.8 seconds to go. Logan Bruce missed both free throws and was whistled for a lane violation on the second to give SK a chance to call timeout and set up one last shot. Rockefeller then rolled off a high screen by DuBois for a last-second three-point heave off the backboard that caught the front of the rim and bounced out to end it.

“Coming into this season, we knew we had a good chance to get back (to states), but nothing is a guarantee,” said SK coach Josh Burroughs, whose team held a 36-23 lead with 4:12 left in the third quarter. “We knew the road through the section would be tough.

“It seemed like every time we would come away with a basket, they would answer,” he continued. “So we could never really get any separation. But hat’s off to them. They played a really good game.”

Laing finished with a game-high 22 points for the Rams, who got 14 from DuBois and 10 from Rockefeller.

Delhi will look to knock off another area champion at 1 p.m. Saturday, when the Bulldogs take on Tri-Valley League winner Milford (20-3) for the sectional title back at O-State. The fourth-seeded Wildcats, who fell, 56-37, to SK in the 2015 final, advanced with a 56-49 victory over top-seeded Southern Cayuga in Wednesday’s first semifinal.

“Kortright is the standard that everybody else around here goes by,” said Todd Bruce, whose team, like Milford, has not lost to a Class D opponent this season. “I’m proud of my girls because they’ve battled like this all year long.

“I think we shocked a lot of people,” he continued. “These girls have been playing together since the third grade. They will battle with anybody.”