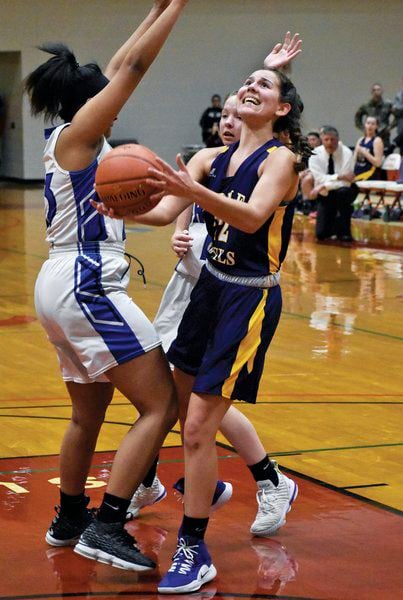 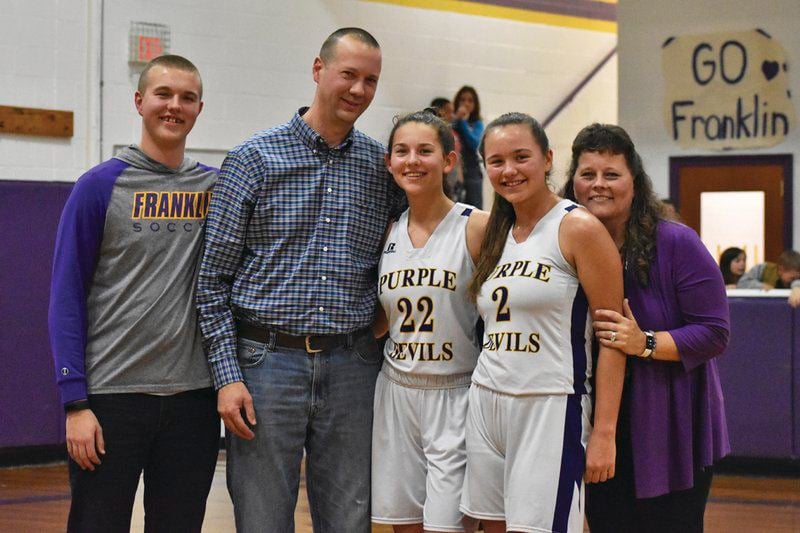 JARED BOMBA | The Daily Star The Campbell family assembles on the basketball court at Franklin after Kayla Campbell scored her 1,000th varsity point during a game against Laurens on Jan 10.

JARED BOMBA | The Daily Star The Campbell family assembles on the basketball court at Franklin after Kayla Campbell scored her 1,000th varsity point during a game against Laurens on Jan 10.

Franklin sophomore Kayla Campbell has not had a typical high school basketball career.

For starters, during her three seasons on varsity, she has led the Purple Devils to a combined record of 50-9, with consecutive Tri-Valley League championships and a run to the Section IV Class D title game in 2019.

This year, the 5-foot-8-inch guard averaged 22 points, six rebounds, six steals and four assists per game for a Franklin team that finished 18-3 and advanced to the section semifinals. The Purple Devils’ No. 22 has already joined the 1,000-point club, as well, after reaching the milestone on Jan. 10.

As a result, Campbell is The Daily Star’s Player of the Year for girls basketball.

“Kayla can really do it all,” Franklin coach Mike Dutcher said. “She can score, she can defend and get her teammates involved all while defenses are keying in on her.”

Campbell has already established herself as a threat night in and night out on both sides of the court, with her athleticism and basketball smarts paving the way.

“I like being the reliable player for my coach and team,” Campbell said.

“She has such a high basketball IQ,” Dutcher said. “Her ability to score can sometimes overshadow her ability to defend. When players are playing the present, Kayla is already predicting what will happen next.”

It didn’t take long for opposing teams to take notice of the Franklin standout’s talents as Campbell regularly faces top defensive coverage. Despite that, Campbell still finds ways to be an effective player for the Purple Devils.

In Franklin’s win over Cherry Valley-Springfield for the TVL title, Campbell drained a game-high 26 points, all while the Patriots made her their top focus.

“My favorite memory is the TVL championship,” Dutcher said. “I thought she did tremendous on both sides of the court and really led us to the championship.

“Probably the most impressive thing, and I’ve heard another coaches say this, she just never gets rattled,” Dutcher continued. “She takes everything in stride and in turn guides our team.”

South Kortright ended the Purple Devils’ season in the section semifinals by slowing down Campbell more than most teams. She finished with 12 points, but experiences like that have given Campbell reason to keep honing her skill set.

“[I want to] be able to come off screens ready to shoot more,” Campbell said. “I’ve always had people right up on me and next year I want to be ready for it.”

Luckily for Campbell, she doesn’t have to look far for resources to help her improve. Sister Marissa Campbell is with her every step of the way as another key piece of Franklin’s recent success. Her father, Matt, is a former Division I basketball player at Towson University and her AAU coach.

“It’s always nice, I can ask Marissa during practice what I’m doing wrong and and I can ask my dad [too] and he can help me out,” Kayla said.

“She does come from a great basketball background,” Dutcher said. “She’s always around people with good basketball knowledge.”

When Kayla scored varsity point No. 1,000, her entire family joined in on the celebration on Franklin’s home court. It was appropriate given basketball is, according to Kayla, “the number one sport in my household.

“That meant so much to me and having a huge crowd that night, it was packed that night,” she continued.

Along with the Player of the Year honor, Kayla was named Section IV Class D Co-Player of the Year by the Basketball Coaches Association of New York while landing on the All-TVL First Team. However, when asked about future goals, the sophomore star put the Purple Devils’ success before anything else.

“The team goal would probably be to win the league and hopefully go farther in the sectionals,” she said.

With Kayla at the helm, Franklin won’t be going away anytime soon.