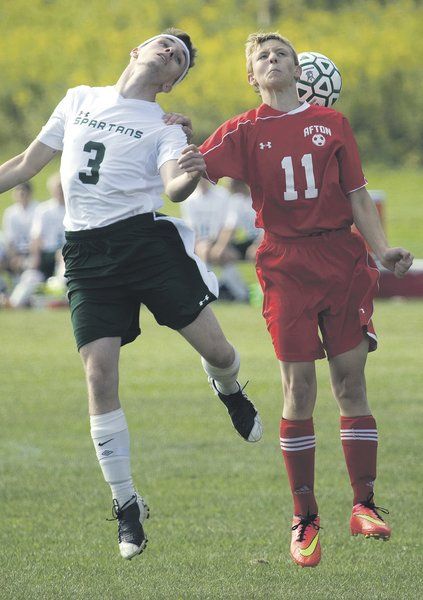 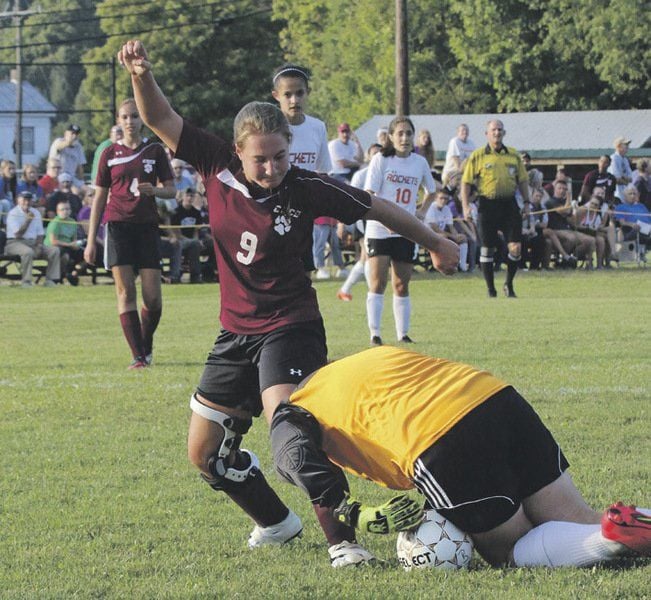 BRIAN C. HOREYDavenport’s Kacie Hymers battles Roxbury goalie Stacey Sprague for the ball in the first half of a first-round game in the Stamford Mayor’s Cup on Tuesday. Davenport won its season-opener, 1-0.

BRIAN C. HOREYDavenport’s Kacie Hymers battles Roxbury goalie Stacey Sprague for the ball in the first half of a first-round game in the Stamford Mayor’s Cup on Tuesday. Davenport won its season-opener, 1-0.

Stamford’s boys earned a 3-1 soccer victory over Gilboa in a first-round game of the Stamford Mayor’s Cup on Tuesday, a game that was called with 15 minutes left because of lightning and a tornado warning.

It marked the season-opener for both teams.

“It was just a light mist with about 17 minutes to go and then a flash a lightning came two minutes later,” Stamford coach Lonnie Nickerson said. “We shut it out for 30 minutes and went back to the buses, and then the tornado warning came and the official said, ‘That’s it.’”

Michael Smith opened the scoring for Gilboa early in the first half on a direct kick from about 20 yards.

Goals by Damian Hill and Colby Fancher later in the half gave the Indians a 2-1 lead. Fancher scored about midway through the first half. He received a throw-in before scoring from 8 yards.

Tyler Townsend contributed a goal in the second half for Stamford, which will play Roxbury in a second-round tournament game at 8 p.m. Saturday.

Gilboa will play Roxbury in a second-round game Thursday.

Game called with 15 minutes left because of lightning and a tornado warning.

Manzanero finished with a goal and two assists, and Tom Philipson had two goals for the Spartans, who led, 9-0, at halftime. Zach Carey also scored for Unatego, which will travel to Delhi on Thursday.

Jayme Ticknor and Troy Mercilliott scored late in the second half for Afton/Harpursville, which played its first game as a combined team.

Paul Clark scored off an assist from Michael Libby with 26:31 left in the first half as Davenport opened its season with a first-round victory in the Stamford Mayor’s Cup.

The Wildcats scored in the second half on an own goal. Matt Finne’s indirect kick was inadvertently headed into the goal by a Jefferson defender.

“We lost quite a few key players, so we’re building in some places,” Davenport coach Deb Moorby said. “We have to get used to working with different players.”

Davenport will play South Kortright at 6 p.m. Thursday in a second-round tournament game.

Jason Adams made 13 saves for Jefferson.

Cuozzo scored 6 1/2 minutes into play. He received a cross from Adam Bauerle and finished from 8 yards. With 18 minutes left in the half, Kyle Hanvey sent a cross that deflected off keeper Keegan Prime’s hands and Norris was there at the far post to tap it in.

Norwich’s Logan Welch scored 17 seconds into the second half. The Purple Tornado nearly had the equalizer with about two minutes left, but goalie Brandt McCall made a fingertip save to stop a breakaway. McCall finished with eight saves.

B-G, which has nine returning starters from last season, will host Oxford on Thursday.

Dylan Thomsen scored twice, and Nate Barker had a goal and an assist, to lead visiting Unadilla Valley to a Midstate Athletic Conference victory.

Delhi’s Alex Cantwell tied the score with four minutes left in the half.

With a minute left in the half, Barker beat two defenders before scoring from 12 yards to give the Storm a 2-1 lead.

The post-Ray Preston soccer era at Davenport opened successfully as Sierrah McAdams scored in the first half to give the Wildcats a first-round victory in the Stamford Mayor’s Cup.

It marked the opener for both teams.

Preston, who coached Davenport for the past 32 seasons and earned 426 victories, retired after last season. Preston will continue as Davenport’s girls basketball coach. He has won a state-record 631 games over 35 seasons in basketball.

“It’s going great,” Brovetto said of having co-coaches. “It’s no issue. We both played for Ray and we both know the system. We’re implementing the same system.”

McAdams scored 4:19 into play. She received a througball from Kacie Hymers and dribbled once before scoring on a low shot to the far corner.

“Of course, we’re happy to get the victory,” Brovetto said. “We have a good core group that Ray had last year. It’s a group he would be proud of.”

Jenna Lutz had seven saves for the Wildcats (1-0), which will play the winner of today’s Gilboa-Stamford game at 6 p.m. Saturday.

Mackensie Gravelin had two goals, and Katie Kirk contributed a goal and an assist to lead host Sidney to a Midstate Athletic Conference victory.

Jessica Champlin opened the scoring 5 1/2 minutes into play. Champlin received the ball on the right wing, penetrated to near the end line before taking a low shot from a tough angle that beat Walton goalie Janine Velardi (10 saves).

Gravelin made it 2-0 13 1/2 minutes before halftime. She received a back-pass from Kirk near the top of the box and drove a shot that hit the bottom of the crossbar and just went over the goal line.

Jenna McDonald also scored for Sidney (2-1, 2-0), which will play the host school at 7 p.m. Thursday in a first-round game in the Greene Tournament.

Dan Marino shot an even-par 35 to lead Windham to a 158-193 Delaware League win over Andes/South Kortright.

Trever Dutton, Justin McMillan and Trenton Stillman shot rounds of 40, 41 and 42, respectively, to lead Sidney to a 215-240 Midstate Athletic Conference victory over Harpursville.

Steven Smith contributed a 44 for the Warriors (2-0, 2-0), who will travel to Hancock on Thursday.