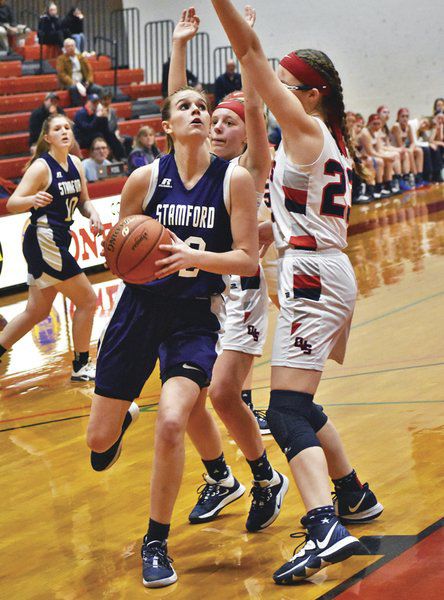 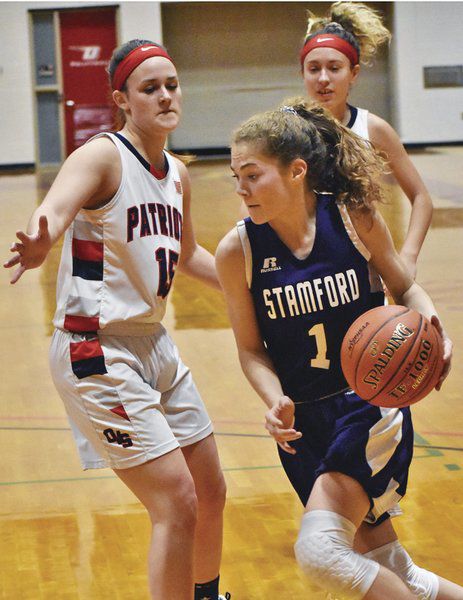 Hoyt, who hit six field goals and went 5-for-6 from the foul line, also grabbed 13 rebounds to record a double-double for the Indians. The center secured 11 points in the first half before running into foul trouble in the third quarter. With four fouls, Hoyt went back into the game with about six minutes remaining in the fourth and scored six more points as Stamford closed out the affair with the Patriots.

“She can play in foul trouble,” Indians coach Lonnie Nickerson said. “It was unfortunate that she was in it, but she’s a very smart ballplayer. She’s very gifted athletically and she’s the heart and soul (of our team).”

Stamford started the game with high energy as it outscored Cherry Valley-Springfield, 28-15, in the first half, including 13-4 in the second quarter, and also snatched almost every rebound available which gave the Indians extra possessions early.

“We came out of the locker room (to start) and we were pumped,” Nickerson said. “Coming out at halftime up 13, that’s always a good thing.”

The Patriots mounted a comeback in the third quarter, highlighted by five points from center Joleen Lusk. Cherry Valley-Springfield outscored the Indians, 16-12 in the third.

Lusk, who was matched up with Hoyt for a majority of the contest, did not register any points in the fourth as she was also dealing with four fouls.

“They have great size,” Nickerson said. “They had three girls, I mean Melanie (Hoyt) has a couple inches on Lusk, but they have two 6-footers they put out there. I thought Michaela Lynch, our 5-10 (player), she rebounded well.”

Lusk finished the game with seven points while Sarah Lewis and Kendra McGovern each recorded 14 for the Patriots.

Leading, 41-30, at the start of the fourth quarter, Stamford surrendered some buckets early on in the frame, but four points from Hoyt and five from Georgia Lynch late but a bow on the win for the Indians.

“Obviously, I thought we played well,” Nickerson said. “We played with a lot of energy. We played well together. Cherry Valley is a good team. They’re number one for a reason. I think our kids just went out there and wanted it.”

Following Hoyt for Stamford was Michaela Lynch with 12 points and Emily Clark with 10 points. Leanna McAuliffe and Georgia Lynch each had nine points.

Michaela Lynch earned a double-double of her own with 12 boards while also dishing out six assists. McAuliffe contributed five assists and five steals.

Stamford made 21 field goals and went 12-for-13 from the foul line. The Patriots were not as consistent from the line, finishing with a 5-for-13 mark, and also collected 18 field goals.

Both teams sank three triples as Clark had two and Georgia Lynch had the other for the Indians, while Lewis hit in a pair and McGovern made the third for CV-S.

Stamford (18-4) moves on to the section final where it will face No. 2 South Kortright.

“Looking forward to it,” Nickerson said. “We played them this year, we played each other the last several years a couple times so we’re familiar with each other, we know each other, it’s just going to come down to who comes out and plays well.”