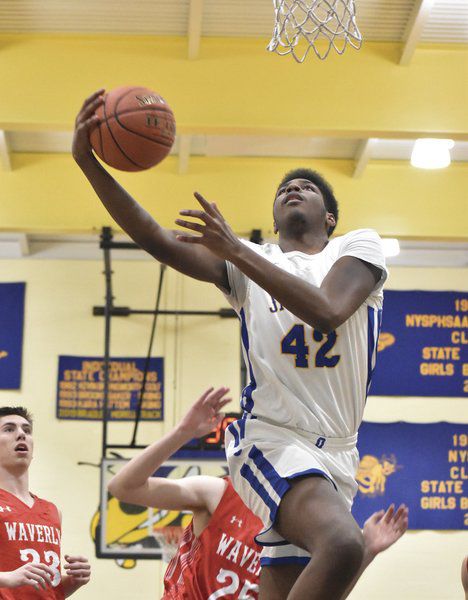 JARED BOMBA | The Daily Star Oneonta’s Zyeir Lawrence scores two of his 16 points during the second quarter of Friday’s Section IV Class B quarterfinal against Waverly at Drago Gymnasium. 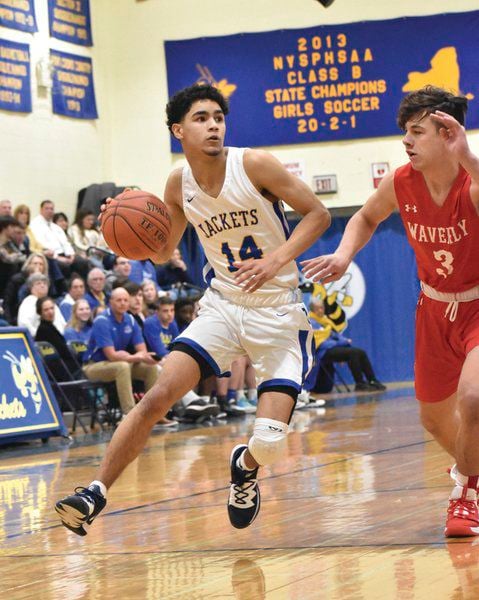 JARED BOMBA | The Daily Star Oneonta’s Zyeir Lawrence scores two of his 16 points during the second quarter of Friday’s Section IV Class B quarterfinal against Waverly at Drago Gymnasium.

“That’s going to be key for us,” Mackey said of having several contributors. “That’s a really good win against a really good team. Scott (Woodring) is as good a big guy as we have faced in maybe five or six years,” Oneonta coach Jerry Mackey said.

Woodring led all scorers with 36 points, and Graham Wooden scored 24 to lead Oneonta in his third game back from injury. Zyeir Lawrence had 16 and Khi Atchinson scored 14 for the Yellowjackets.

“We’re a collective group, and especially tonight we wanted to bring a lot of intensity and energy because this game meant a lot,” Wooden said. “I have a lot of trust in these guys, especially Z and the seniors and then the underclassmen too. Guys stepped up in big roles and it takes some pressure off me. It really helps us.”

Despite a slow start, it was a run during the latter half of the first quarter that gave OHS an early lead it did not give up. Woodring had his way inside early and helped the Wolverines to a 10-4 lead. He had 10 in the period.

With Lawrence struggling early against Woodring, Carter Mackey was tasked with slowing down the Wolverines’ standout. With a focus on preventing anything easy, the sophomore was able to give Lawrence a rest, and as the Waverly offense sputtered the Yellowjackets attack began to produce.

Atchinson had the first nine points of the game for OHS, and a 16-2 run late in the frame generated a 20-12 Oneonta lead after one. Five players scored in the run, with Alex Osterhoudt contributing a 3-pointer on a feed from Atchinson.

Lawrence, a senior, scored the final basket of the first quarter, and carried that energy into the second. A renewed defensive effort and an offensive rebound for two points from him made the deficit 22-14 before Wooden hit a stepback jumper for a 10-point lead.

“Carter went in and did a good job on Scott after Z got off to a little bit of a rough start that swung the momentum a little,” Jerry Mackey said. “They (Lawrence and Carter Mackey) have been good together. They bang on each other a lot in practice, but Carter has done a good job of settling in with the older kids. And the older kids have treated him like another player.”

With the deficit at 10, Lawrence threw down a dunk that typified the energy of the run. Penetration from Wooden turned into a pass to Lawrence, whose two steps of nifty footwork took him from the baseline into a gliding slam over a Waverly defender.

“I knew the guy covering me was going to help so I just tried to get my feet set so I could go up and dunk it,” Lawrence said. “I knew I could dunk it and I like to get the crowd going, so that’s how it went.”

Lawrence had eight points in the quarter and the lead grew to as many as 14 before settling at 38-25 at halftime.

Despite eight points from Wooden, Waverly clawed its way back into the game behind 11 points from Woodring in the third. Woodring scored again to open the fourth, cutting the deficit to five.

But reserve Tanner Russin answered the call, scoring five straight points to return the deficit to double figures. The first basket came on a long 3-pointer from the right wing with the shot clock winding down, and the second on a drive into the lane where Russin hit a delicate runner.

“Tanner came in, and we talk about being ready every day. Sometimes it can be hard when you’re working in practice and you aren’t getting long runs or opportunities,” Mackey said. “But the three or four times we’ve called him in stretches of key games, he’s answered the bell.”

Woodring kept Waverly close with seven in the fourth quarter, but Wooden had six to keep the deficit at no fewer than nine. Kevin Kurkowski supplied the dagger for OHS as his 3-pointer with two minutes left came at the end of a long possession and made the gap 64-49.

The win gives Oneonta a third chance at Southern Tier Athletic Conference rival Seton Catholic in the section semifinals. The top-seeded Saints won a pair of tight games over OHS during the regular season, the second during Wooden’s absence.

“Can we take those efforts from against CV, against Seton when Graham was out and Norwich and if we add Graham in, we could be a tough out,” Mackey said. “If we just say Graham is back and ask him to solve everything, we’ll have the same result. But we are excited to keep playing.”

“We’ve got a big one Tuesday,” Wooden said. “We just want to go down to Binghamton, down to Seton and just compete.”