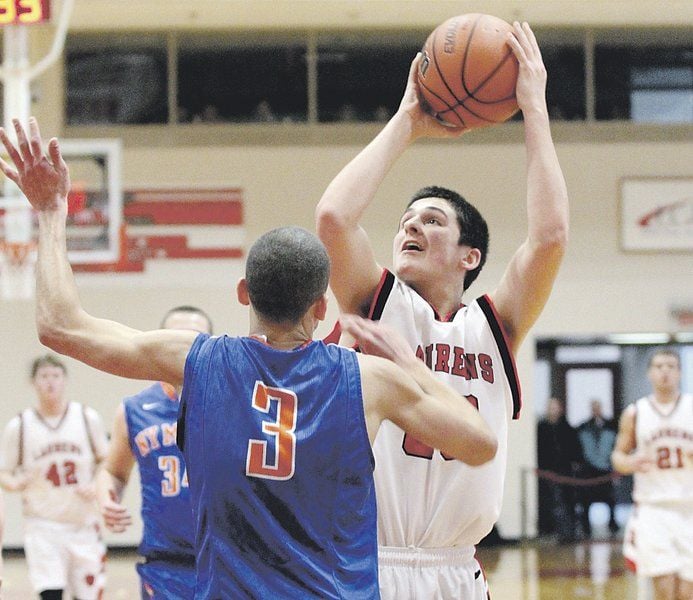 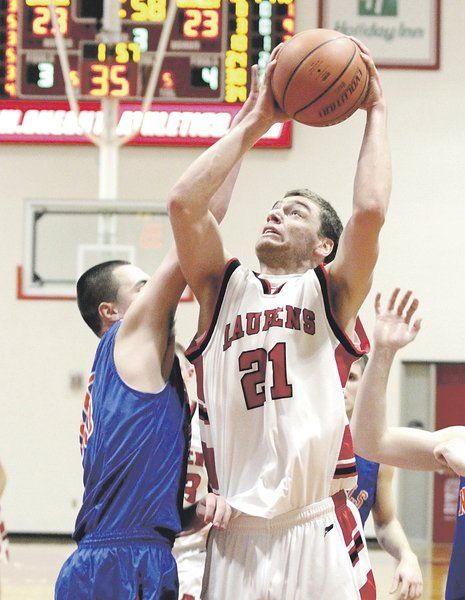 ONEONTA — Mason Weir had the spotlight all to himself Saturday.

Terrance Nichols didn't seem to like that very much, though.

"We knew they were going to push the ball. I think we just got caught up in the moment a little bit," said sophomore point guard Weir, whose long-range shot from the left wing put Laurens up, 37-36, with 2 minutes, 40 seconds left. "He's real fast and he came down and just caught us off-guard. Everybody was trying to get back and all of a sudden, he was there."

Nichols took the ensuing inbounds pass the length of the court with little resistance until Jarrett Benjamin went for a block just in front of the backboard. By then, Nichols was already in release-mode for a right-handed lay-in off the glass that gave the defending Class D state champions a 38-37 edge with 2:26 to go.

Nichols drew Benjamin's fourth foul in the process and made the "and-one" free throw. Neither team scored again until Nichols hit both ends of a 1-and-1 opportunity at the foul line with 35.2 seconds left, extending the Marauders' advantage to 41-37.

"We had trouble because shots were going in-and-out for us all day," said Weir, whose team missed its final five shots from the floor. "We've been shooting really well here (at O-State), but everything was rolling in and rolling out. It's just not our day, I guess."

Laurens still had a chance when senior Mitchel Barra drew a foul on Luke Sunderlin while the Leopards were setting up for an inbounds play with 16.1 seconds remaining. Barra made both of his 1-and-1 free throws, but with time running out, Laurens was forced to foul.

Section Three champion New York Mills (21-3) made sure the Leopards (21-3) had to foul leading scorer Nichols, too.

"This is my third (varsity) year now and last year I was on the state-championship team," said Nichols, who completed another 1-and-1 set after Weir fouled out for a 43-39 lead with 14.3 seconds left. "I'm used to games like this by now. I just remain confident and keep my composure. I like being the clutch player."

Jared Conklin then missed a deep three from the top of the key, and Laurens teammate Anthony Monaco sent Sunderlin to the line for a two-shot foul with 5.6 seconds to go. Sunderlin made the second shot to cap the scoring as New York Mills advanced to a state semifinal against Section Six's International Prep at Grover at 10 a.m. Friday at the Glens Falls Civic Center.

"It's great," said senior guard Andrew Suprenant, who scored eight points for the Marauders during an 11-5 run that covered the first 2:28 of the fourth quarter. "It's a dream to go back for the second consecutive year. Not many teams get to even go, but two years in a row? It's a dream."

That dream nearly slipped away for New York Mills, which faced a 26-23 deficit after scoring five points in the third quarter. Two foul shots by Barra snapped a 23-all tie with 1:57 left in the third, and Monaco hit the back end of a two-shot foul with 43.5 seconds to go.

Suddenly, everything that went up went in.

Suprenant hit a three from the left wing to tie it at 29, but Barra went high on a drive through the left side for a lay-in.

Suprenant followed with another three, this time from the right wing, for a 32-31 NYM lead. After Monaco missed a free throw, Suprenant completed an uncontested drive through the paint with a layup for a 34-31 edge.

That finished the hottest stretch of shooting in the quarterfinal as the teams combined to go 6-for-6 from the floor. Both had their biggest offensive outputs in the fourth quarter, when the Marauders outscored Laurens, 21-13.

"We came down and hit a three, then they come down and match our three and that's the game of basketball," 14th-year Laurens coach Andy Carr said. "It's a game of runs and the unfortunate thing is they had their run at the same time we had ours."

Monaco's three-point play on a weakside putback tied the score at 34 with 3:57 remaining, but Griffin Baur's two-point shovel-shot inside the paint put NYM back on top, 36-34, with 3:28 to go. Weir followed with his final three-pointer to give Laurens its last lead.

"The fourth quarter was the key," Suprenant said. "We came in and hit threes, we got rebounds and (Ben) Kerhli got a huge rebound. Coach (Mike Adey) called a timeout and said we need to come together now. This is our last chance."

Laurens more than just a chance to become the first team in program history to reach the state semifinals.

Benjamin scored all four of his points in the first quarter, which ended with Laurens ahead, 10-8.

The Leopards' Shawn Rockwell ended the first-half scoring by hitting an open three-pointer from the right baseline seconds after entering the game for the first time as the teams headed into the break tied at 18.

Conklin scored his only points and Laurens' only field goal on a three-pointer in the third quarter, when Barra made three foul shots and Monaco hit two for an 8-5 advantage in the period.

"We knew we could hang with them," Weir said. "We knew coming in that we were a good team and they were a really good team. We knew our size was going to play to our advantage, so we used that and we tried to use the inside to get more points.

"We knew all the stats coming in and we knew their history," he continued. "But after (beating South Kortright in) the sectional final, we knew that we could take on anybody. We knew that any day, we could beat anybody and that we were good enough to win states. We kept that mindset this whole time and it just didn't go our way."

Barra finished with a team-best 11 points and a game-high 10 rebounds for the Leopards, who got nine points apiece from Weir and Monaco.

"We talked about it a little bit, about the kids who are coming back," said Carr, who will lose Barra, Conklin, Edwin Rivera, Michael Flatley and Jordan Shaul to graduation. "I lose five seniors and two starters. Mason Weir made a statement in the locker room that it's going to be a little different to start next year without those seniors, but we'll play some spring and summer basketball, get regrouped and come back at it."

Nichols went 5-for-6 from the foul line in the fourth quarter, when he scored seven of his game-high 16 points. Suprenant contributed 11 points for NYM, which received seven points and a team-best six rebounds from Sunderlin.

"I told the guys in the locker room to watch New York Mills and see where they end up, and then you'll find out how good they really were," Carr said. "We thought we had a chance to beat them. We really felt we could play with these guys.

"It's just been a great team effort and a great run for Laurens Central School," he continued. "It's been a great winter."

Weir said he's already looking forward to next season, which will be his third at the varsity level.

"I've played with these seniors since I was in fourth grade. It's big for me because I've played with them my whole high school career," he said. "It's going to be tough losing them, but we're excited for next year. We're not looking too far ahead yet, but we think we're going to have a decent team coming back."

Three local teams made it into the state tournaments. After the quarterfinals, two remain. South Kortright and Cooperstown girls will play in …