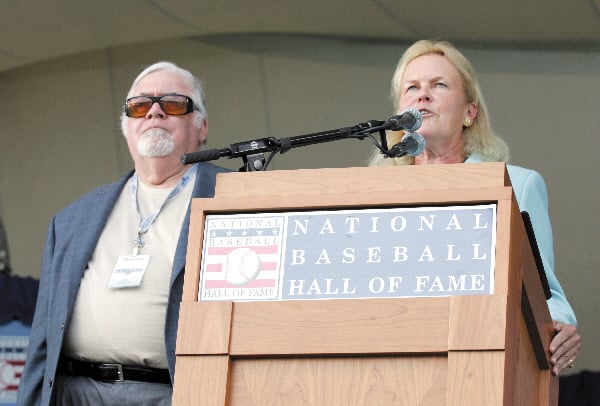 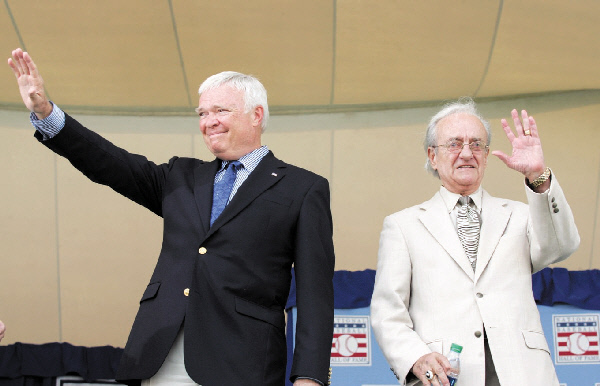 COOPERSTOWN _ The National Baseball Hall of Fame paid tribute to the best print, radio and front-office men in the business Saturday at Doubleday Field.

Conlin, who began his sports-journalism career at Philadelphia's Evening Bulletin in 1961, used humor to rescue himself when his iPad teleprompter failed to load his speech on time.

"I don't want you to think it was hot today, but Pete Rose was reported down on Main Street selling autographed Slurpees _ $5 for the autograph and $20 for the Slurpee," said Conlin, 77, whose speech touched on diverse subjects such as Dutch Elm Disease, the impact of technology on journalism, his funeral, Jim Crow laws and the Battle of Gettysburg.

As a 21-year beatwriter covering the Phillies, Conlin had a chance to see baseball's all-time hits leader up close as Rose played for Philadelphia from 1979-83. Although he remains banned from baseball for gambling, Rose must have made quite an impact on Conlin.

"One last thing: Please get Pete Rose off Main Street and into the Hall," Conlin said toward the end of his speech, which lasted 11 minutes, 21 seconds. "Keep the ban for the compulsive gambler we met in the Dowd Report, but enshrine the guy who played with his hair on fire _ the overachiever who lashed those 4,256 hits."

"Commissioner Selig," he said, "tear down that ban!"

Van Horne followed with a shorter, tamer speech that focused on his biggest moments in broadcasting.

"I recognized magic because I described a lot of it for 43 years," said Van Horne, who spent one season as an International League broadcaster before becoming the play-by-play voice of the Montreal Expos.

"Those no-hitters and playoff games, they're all very, very special," said Van Horne, who called 11 no-hitters and three perfect games. "That's what you live for. And in 2003, finally to get to a World Series with the Marlins was thrilling and exciting, and I'll never forget that."

Ironically, his job with the Marlins brought him back to Olympic Stadium to cover the last Expos' home game in franchise history. Montreal lost, 9-1, on Sept, 29, 2004. The next season, the Expos became the Washington Nationals.

"Nine years ago, I presented Buck O'Neil with an award, a Baseball America Award bearing my name," Hemond said during his speech. "It was such a great honor for me to meet this gentleman _ his graciousness, his smile, his genuine love for people in our game."

Hemond, who has devoted more than 60 years to baseball, serves the Arizona Diamondbacks as a special assistant. Hemond also spent 24 seasons as a general manager (1970-85 Chicago White Sox; 1988-95 Baltimore Orioles).

He said his greatest challenge came in Baltimore, where he helped the Orioles bounce back from a disastrous 54-107 season in 1988. The Orioles won 33 more games the next season and challenged for the American League East title until the final weekend of the 1989 season.

Hemond closed with a story about his mother, a French Canadian seamstress who bought him a glove at age 11 and asked, "Where will this take you?"

"But Ma," Hemond said as he fought back tears, "the Buck O'Neil Award!"

The awards ceremony opened with a tribute to The Chevrons band member Terry Cashman, who performed his song "Talkin Baseball" in honor of its 30th anniversary.

"Duke Snider once told me that I should be indebted to his uncle for giving him the nickname 'The Duke,' " said Cashman, a New York City native whose hit focused on the center fielders for the New York Giants (Willie Mays), New York Yankees (Mickey Mantle) and the Brooklyn Dodgers (Snider). "Otherwise, he said you would have had to call the song, 'Willie, Mickey and the Edwin.' "