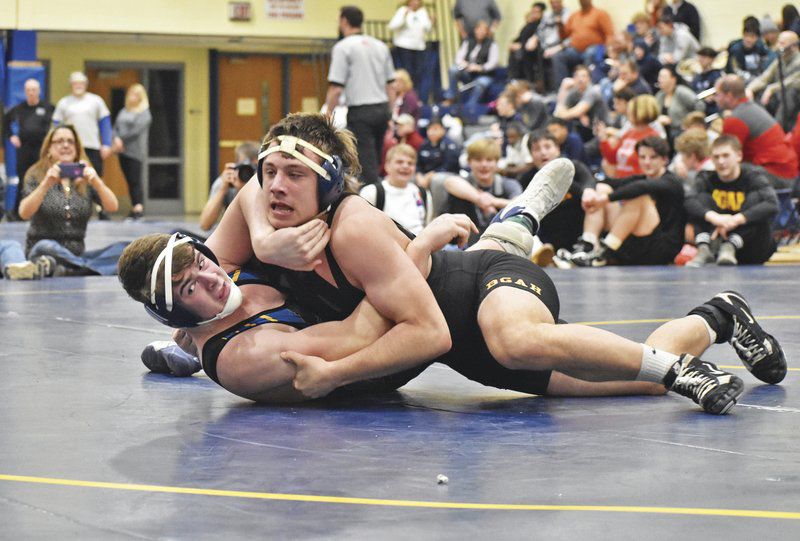 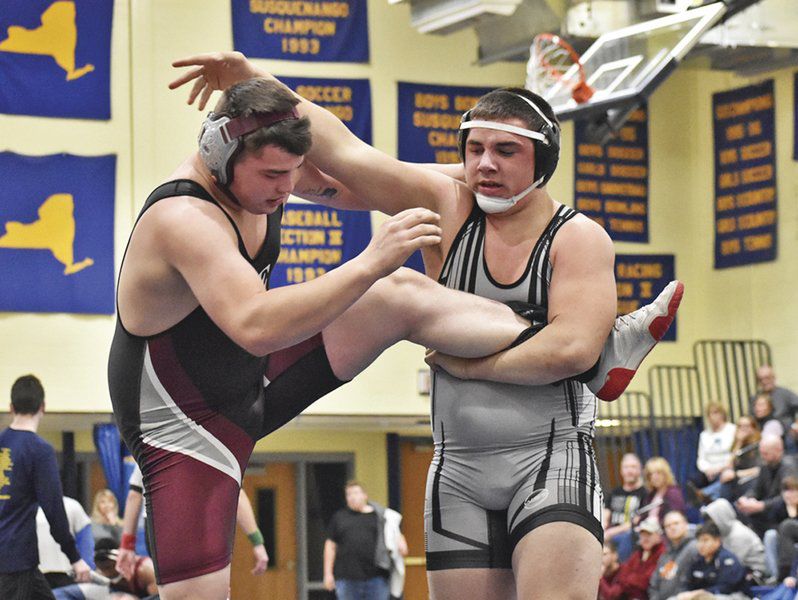 Bainbridge-Guilford/Afton/Harpursville tied for the most first-place finishes with three, led all local teams with nine top-six finishes and finished second overall with 206.5 points, trailing only winner Burnt Hills (208.5).

“We had a really good tournament. But we made plenty of mistakes that we can keep working on, too,” BGAH coach Brandon MacNaught said. “We are getting some guys back, healthy and eligible. We haven’t yet put out our full team and we are hoping to in the next week or so.”

Burnt Hills led all programs with 11 top-six finishers, taking top team honors despite failing to produce a champion in any weight class.

Florance reached the final with a 7-4 semifinal decision, and pinned Wyatt Meade of Unadilla Valley/Unatego in 4:14 to take first.

At 145, Oleksak pinned Oneonta’s Ardell Wellman in 1:04 to reach the final, where he pinned Karter Rude of Athens (Pa.) in 3:50 to finish with three pins in three matches. He also earned the tournament’s sportsmanship award.

Eggleston pinned Susquehanna Valley’s Mitch Enright in 48 seconds to reach the final at 195, where he pinned Dalton Wells of Oneonta in 1:37 to complete his own set of three pins for the tournament.

“We’ve been fortunate over the years to have at least one, if not a couple, of guys that know what is expected of them coming here,” MacNaught said, noting the tournament’s high level of competition. “They also know that just taking first here might not necessarily make me happy.”

MacNaught said he was even more pleased with the progression of other place-winners in his team. Joey Florance was second at 106, Timmy James was third at 285, and fourth-place finishes came from Jacob Terpstra (120), Brady Buttice (152), James Craig (170) and Rocco Arduini (220).

“Guys that never really take top fours really contributed. It was a really good team performance,” MacNaught said. “It’s time for that. There’s light at the end of the tunnel.”

Walton/Delhi was next up for local schools, taking seventh place with 97.5 points. Cody Merwin took first place at 126, reaching the final with an 11-5 decision before defeating Cooper Rice of Chenango Forks, 6-2, in the final.

Scott Barnhardt finished second at 220 for W/D, reaching the final with a 5-2 decision before falling to Alex Thompson of Sherburne-Earlville in a tight 3-2 match. The loss marked the second time this season that Thompson defeated Barnhardt in a tournament final after winning by fall in 1:41 during the final at the Cuneen-Doane Tournament.

“It feels good. I did a lot better against him than last time,” Barnhardt said. “I took a lot more shots and was just more offensive.”

W/D also got a third-place finish from Dustin Copeland at 145 and fifth-place efforts from Nick Lamoreaux (152) and Kaiden Vernold (160).

Cooperstown/Milford’s Avery Leonard was the remaining local athlete to top their weight class, taking the title at 120. Leonard reached the final with a pin in 1:01, giving him three pins in three matches, before a 7-0 decision over Tyler Rossini of Burnt Hills handed him the crown.

“This is just another step on the journey to states. That’s the main goal,” Leonard said. “My bracket is going to be harder, so I’m just trying to do the best I can for now. I know if I wrestle as hard as I can, I can win any match.”

Josh Meade was fifth at 126, while Matt Bogdan (132) and Sammy Cole (182) notched sixth-place finishes for UV/U. Coach Mike Hamilton echoed several other coaches when describing the tournament’s high-quality competition as a chance to springboard into the second half of the season.

“It’s always good this time of year to start gearing up for the end of the year,” Hamilton said. “It’s good to see that type of competition here.”

Wells led Oneonta with his second-place finish at 195, helping the Yellowjackets to 81.5 points and 11th place. Wellman was fourth at 145, as was Jerimiah Morris at 285, while Jack Caruso (fifth, 132) and Mateo Goodhue (sixth, 170) also reached the podium for the Yellowjackets.

“Coming into this tournament, we know we are trying to get the tough matches that prepare us for sectionals and hopefully states,” Oneonta coach John Nealis said. “When you host a tournament like this, I don’t get to spend as much time with them, so it’s a good challenge for everybody. There’s the teamwork to get all of that done, then their performance on the mat is icing on the cake.”

Chenango Forks’ Logan Gumble, the winner at 138, and Carthage’s Fombo Azah, the champion at 182, were named the tournament’s most outstanding wrestlers.