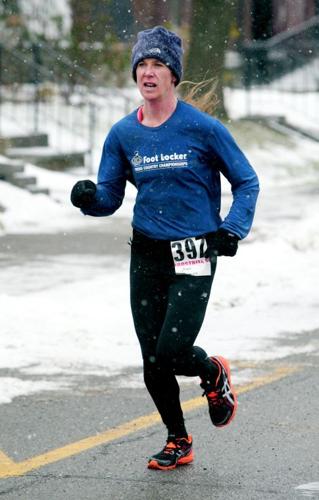 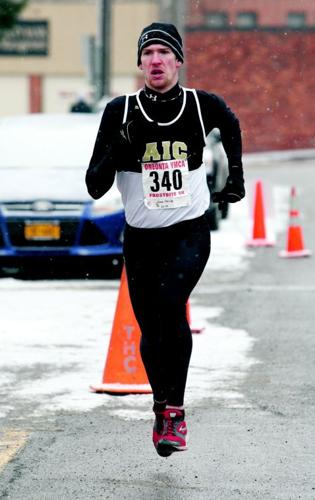 ONEONTA — More than 189 participants braved temperatures near 20 degrees Tuesday at the Oneonta Family YMCA’s annual Frost Bite 5K. Adolescents, families and individual runners bundled up in cold-resistant fabrics, with the exception of one, who wore fur.

Pongo, a Dalmatian, ran the race with Bill Boyle, his owner, and 9-year-old Cody Feil. Boyle, of Oneonta, said Pongo is not used to running on a leash, but did a great job and ignored passing distractions, such as barking dogs, like a seasoned pro. The cold temperatures didn’t bother the group, according to Boyle, 38.

“It feels good when you’re running,” he said.

Feil said he did not do as well as he wished, but started out “right up front.”

Oneonta Family YMCA Executive Director Frank Russo said the Frost Bite 5K is a yearly fundraiser that benefits the YMCA scholarship fund and offsets program costs. No figures were available Tuesday. He said the Frost Bite is a great tradition because it is family-friendly.

“We see everyone from little kids to seniors,” Russo said. “The race is a community favorite with participants from young to old. The ‘Y’ is for building a strong community.”

Zapata, an 11th-grader who has been in Oneonta since October, said he plays soccer in Mexico, but had never participated in a race.

“It was very cold,” Zapata said.

Dorothy Davidson said the West Oneonta family has participated in other races together.

“They did a Turkey Trot in Florida once and had to carry a turkey between them,” Davidson said.

After crossing the finish line, the Davidsons gathered with the other runners in the YMCA gym for oranges, bagels, energy bars and water. Medals were given for first, second and third place.

Former SUNY Delhi runner Jason Phillips won the overall title with a time of 16 minutes, 46.1 seconds. Phillips, who is from Moravia, competed for the Division II cross country program at American International College in 2012 and 2013.

“I like to see the community getting together,” said 15-year-old Kottmeier, who earned his best finish in his third Frost Bite appearance. “It’s nice to see friends.”

Kristy Lawson, operations manager at the Oneonta Family YMCA, said she was pleased that so many people came out despite the temperature.

“The run is such a nice way to kick off the new year with friends and family in a healthy manner,” Brantley said. “It reminds you that getting out and moving, even when it’s cold out, makes you feel good and makes you happy. That was clear from the smiles that came across the finish line!”

Steve Hornung and Wayne Allen owned two smiling faces that crossed the finish line early on. It was the third time running in the Frost Bite for both men.

Hornung, 58, said the weather wasn’t “too cold” and thought the race went well.

“The course is really nice,” said Hornung, who finished 18th in 20:47.3. “We really appreciate the great job the Russo family does every year.”

Said Russo: “It was a great day and a successful fundraiser.”