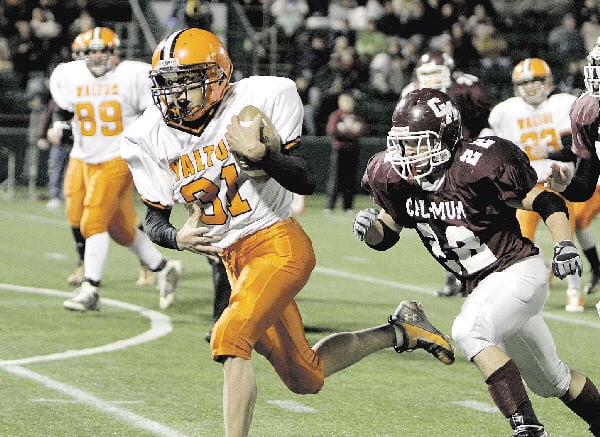 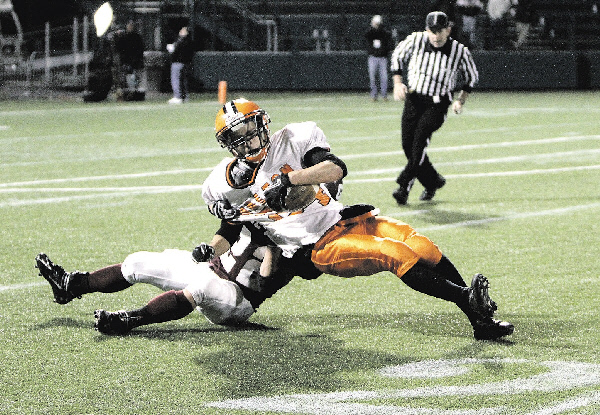 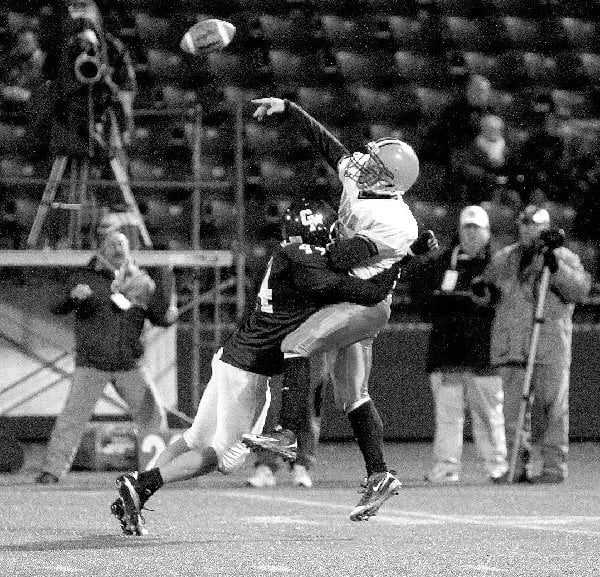 ROCHESTER _ Turnovers caught up with Walton.

The Warriors lost two fumbles inside the 10-yard line and couldn't recover in a 24-10 loss to Section Five's Caledonia-Mumford in a Class D football state semifinal on a crisp Friday night at Marina Auto Stadium.

"Here's a team I don't think anybody gave us a chance to beat except ourselves," said 35th-year Walton coach Jim Hoover, whose team failed to score on three drives inside the 10-yard line. "We had them. We had three touchdowns we don't score. That's part of the game and I understand that.

"Three touchdowns," he continued. "We're inside, what, the 5 and we fumble? Inside the 1 and we fumble? And we don't score with ball on the one-foot line."

Cal-Mum will seek its fifth state title when it meets Tuckahoe in the final at noon this Friday at the Carrier Dome in Syracuse. Tuckahoe beat Moriah, 31-10, in Friday's other semifinal at Dietz Stadium in Kingston.

The Red Raiders' biggest stop Friday night came at the end of the first half with Walton trailing, 16-8. The Warriors used a seven-play drive to reach Cal-Mum's 1 with about a minute left before halftime. On the eighth play, sophomore quarterback Dalton Kaminsky tried to score on a keeper, but the ball popped loose.

Cal-Mum's Tyler Lauffer recovered the ball in the end zone for a touchback with 57 seconds remaining in the half.

Kaminsky said he thought he was down, though he admitted he didn't know if he had crossed the goal line.

Kaminsky said he ran with the ball pinned against his right hip.

Hoover, Section Four's all-time winningest coach at 281-69-1, said he wasn't sure what happened.

"We thought he was stopped," Hoover said. "I guess he wasn't. You have to go by what the officials say."

Cal-Mum (11-1) ran out the rest of the half. Walton then started the second half with a 10-play drive that took six minutes off the clock but ended with a punt. Although the Warriors advanced to the Red Raiders' 38, the drive essentially ended when Kaminsky got flushed out of the pocket on third-and-14. Kaminsky zig-zagged backward before getting sacked by Trevor Haut for a 19-yard loss.

"You get a game like this and everybody is tough and everybody hits hard," Cal-Mum coach Mike Monacelli said. "We made some mistakes and they didn't capitalize as well as we capitalized on theirs."

Cal-Mum followed with a six-play scoring drive that started at its 26. Quarterback Madison Suhr's 1-yard push capped the drive with 3: 43 to play in the third quarter. Suhr then hit Haut on the conversion pass for a 24-8 lead.

That final scoring drive featured Cal-Mum's only pass attempt _ a 45-yard completion from Suhr to Lauffer that put the Red Raiders at Walton's 27 _ and Jon Cappotelli's 18-yard run to Walton's 9. Cappotelli finished with 84 yards on 19 carries to lead Cal-Mum.

Walton also failed to score after penetrating deep into Cal-Mum's half with 2:26 remaining. Matt Hartford's punt into the Cal-Mum line bounced backward and set up the Warriors at the Red Raiders' 10, leading to a fourth-down play about a foot from the goal line. Cal-Mum then stuffed Nick Shiels on a run up the middle for a turnover on downs.

"We couldn't do anything up the middle," said Walton's Christian Howe, who amassed 100 yards on 21 carries. "They were so tough and had big players. We broke a couple of good plays, but the outside is where we probably should have went."

Walton scored the final points on a safety with 35 seconds to go, sacking Suhr in the end zone after Shiels was stopped. Suhr scrambled from side-to-side in the end zone to milk the clock before taking the sack as Cal-Mum gave up the two points to avoid a possible turnover.

The Red Raiders scored on the game's first drive, covering 63 yards in six plays. Lauffer completed the drive with a 36-yard touchdown run to the left side, slipping three tackles along the way. Suhr hit Dan Whiteside on the conversion pass for an 8-0 lead with 9:16 to go in the first.

Walton tied it in the second quarter. Howe stumbled past the line of scrimmage on the left but kept his balance and avoided a couple of defenders on his way to a 21-yard TD run. Shiels went in on the conversion run to make it 8-8 with 11:21 left in the first half.

Cal-Mum answered with a 14-play drive, taking the lead for good when Suhr scored on a 1-yard run. Cappotelli followed with the conversion run for a 16-8 lead with 4:37 to play in the opening half.

"You're happy to win sectionals and you're happy to win the next round," Hoover said. "But it's so disappointing. You say, 'Wow, we weren't supposed to be here.' But we are and you lose and it's a terrible feeling."

The season as a whole seemed to rejuvenate Hoover as he said he doesn't think he'll be stepping down any time soon.

"Right now, I feel unbelievable," said Hoover, who took over coaching the lines this year when Mike MacDonald stepped down to focus on his administrative positions at Walton. "I really do. I'm excited. … It was a challenge to take over the line. I was excited and it was something different. I really enjoyed it and right now, I'm good for I don't know how long.

"I got a bum ankle and my shoulders hurt a little bit," he continued with a laugh, "but what else would I do?"

at Marina Auto Stadium in Rochester