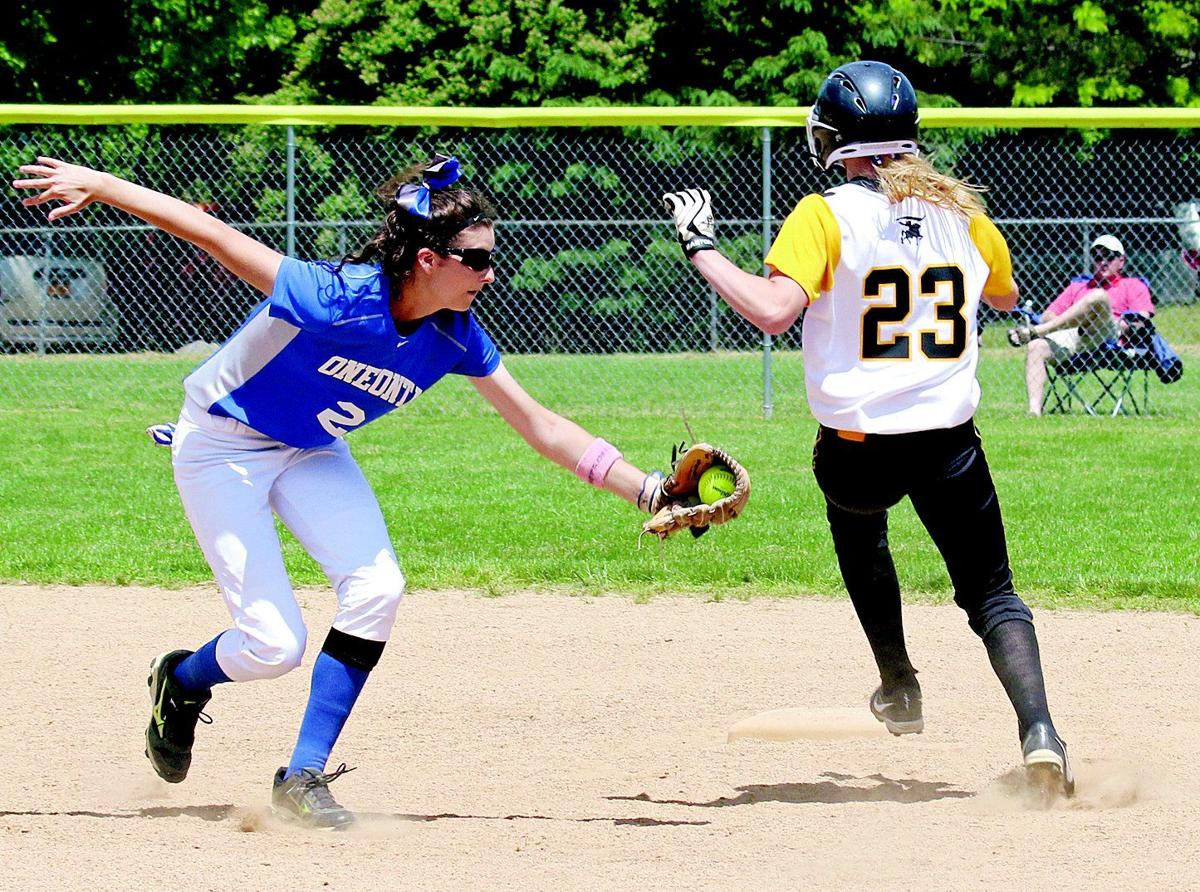 BRIAN C. HOREY Oneonta High shortstop Bekka Struble is late with the tag as Windsor's Danielle Cary takes second base on a wild pitch during the second inning of Saturday's Section Four Class B championship game at the BAGSAI Complex. 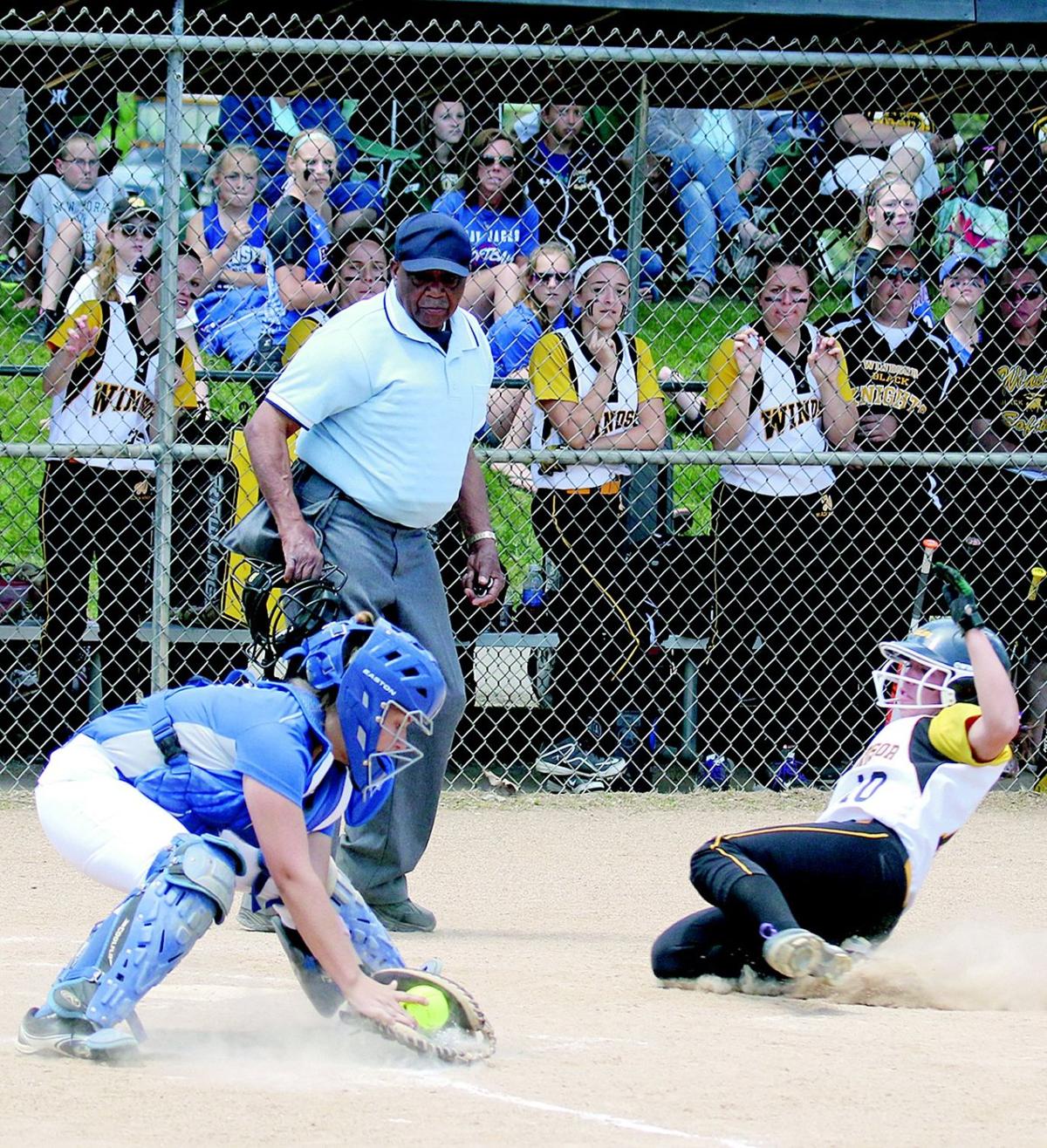 BRIAN C. HOREY Windsor's Emma Benson scores in the bottom of the third inning Saturday as Oneonta High's Aiyana Roupp catches the relay throw home during the Section Four Class B championship game at the BAGSAI Complex. The second-seeded Yellowjackets' season ended with a 9-1 loss to top-seeded Windsor, which won its fourth straight sectional crown.

BRIAN C. HOREY Oneonta High shortstop Bekka Struble is late with the tag as Windsor's Danielle Cary takes second base on a wild pitch during the second inning of Saturday's Section Four Class B championship game at the BAGSAI Complex.

BRIAN C. HOREY Windsor's Emma Benson scores in the bottom of the third inning Saturday as Oneonta High's Aiyana Roupp catches the relay throw home during the Section Four Class B championship game at the BAGSAI Complex. The second-seeded Yellowjackets' season ended with a 9-1 loss to top-seeded Windsor, which won its fourth straight sectional crown.

NIMMONSBURG — From the 1988 movie Bull Durham, we learned it’s a simple game: You throw the ball, you catch the ball, you hit the ball.

Oneonta High’s softball team discovered during a sunny Saturday afternoon at the BAGSAI Complex that Windsor does those things as well as any team in Section Four.

And the Black Knights made it look easy.

“I wouldn’t necessarily say it’s David and Goliath, but Windsor came out and was patient and got the timely hits, and we didn’t really capitalize on what we had,” said OHS coach Randy Brockway, who steered the second-seeded Yellowjackets into a sectional final for the first time in program history. “They’re a seasoned team and they were confident coming into today, so my hat goes off to them.”

Facing a program that devours, gulps and dreams softball, these young Yellowjackets learned little mistakes become magnified when facing the Black Knights, who seemed to take advantage of all of them.

Sure, the Yellowjackets had the game’s best pitcher in Baker, but Windsor (22-1) was better in every other facet of Saturday’s game.

At times, the hard-throwing Baker looked dominant. The first 10 outs by Baker came on strikeouts, but by that time, the Black Knights held a 4-1 lead.

Though the Black Knights didn’t always hit the ball, when they did make contact it was solid.

Winning pitcher Paige Rauch’s performance at the plate best describes how this day went. She struck out in her first two at-bats and looked overmatched in doing so. Her last two at-bats resulted in hard-hit doubles to right.

“BB is a great pitcher and she’s committed to making you go after pitches that aren’t really there,” said Rauch, a freshman who entered the circle with two outs in the fourth inning and retired all 10 batters she faced — five by strikeouts. “So you really have to be patient and wait for that one pitch you can drive. At first, I thought we were a little rough timing her and getting used to her, and then we got right on her and took advantage of every opportunity we had.”

During the season, Windsor defeated OHS by scores of 2-0 and 5-0.

That’s why the 32-pitch nightmare of a first inning proved so costly for the Yellowjackets. Windsor received a one-out single by Allison Lockwood, walks by Emma Benson and Mara Kohlbach, advanced on three wild pitches and one passed ball, and stole two bases.

“When they scored two runs without an RBI or a sacrifice, that kind of hurt us and put us in a hole,” Brockway said.

Lockwood lined a single to center to start the rally. She went to second, third and home on wild pitches to make it 1-0.

Benson’s joyride around the bases started with a walk. She then stole second, went to third on a wild pitch and scored on a passed ball.

“I have enough team speed to move kids if we’re on first or if we’re on second,” Windsor coach Bill Waldron said. “She threw a couple of wild pitches early that got away from her catcher, but we had to be on third to take advantage of them.”

Baker and freshman catcher Aiyana Roupp didn’t appear to be on the same page in the first inning. On two occasions, Roupp set up outside and Baker’s pitches went inside, resulting in wild pitches.

From an offensive standpoint, OHS had its moments against Windsor starter Kohlbach.

Bekka Struble led off Oneonta’s second inning with a lined double to the left-center field gap. After Roupp struck out, Deseray Thomas’ groundout to second moved Struble to third, but Kohlbach got out of it by getting Ceili Getman to ground out to second.

The Yellowjackets (15-6) broke through in the third inning.

No. 9 hitter Jordan Gaisford started it with a one-out double to left-center. Baker followed with a ground single to center that scored Gaisford to make it 2-1. Baker went to second on the throw home, then to third on a groundout to second by Sara Horne, but Mia Obergefell struck out to end the inning.

Windsor then scored once in the bottom of the third inning and broke it open with three runs in the fourth.

In the third, Benson, who went 3-for-3 with three runs and three RBIs, lofted a single into left-center. She stole second and scored on Kylie Buchek’s lined single to right.

The Black Knights’ fourth inning started with a double to right by Jordyn Steele. After Danielle Cary walked, Rauch’s double to right-center scored Steele and sent Cary to third. Baker followed with a strikeout of Lockwood, but Benson pulled a change-up to left that scored two runs to make it 6-1.

Three more runs scored in the sixth. Rauch led off with a double, and Lockwood, Benson and Buchek followed with RBI hits.

“As the game wore on and she had to throw more pitches, she had to come into our zone and we were looking for certain pitches in certain zones,” Waldron said of Baker. “We were able to put good swings on them.”

Baker said she was impressed with Windsor’s lineup.

“All of them play travel ball, except for one, so obviously, they’re going to hit the ball,” Baker said.

Waldron also had high praise for Baker, who finished the season with 257 strikeouts.

“She’s right up there,” Waldron said when asked where Baker ranks among the pitchers Windsor has seen this season. “She had a great season last year and, obviously, she had a great season this year. She’s tough because she moves the ball around the strike zone, so to focus on a certain pitch is sometimes very difficult for the average high school player. I think BB is right there, especially with her velocity and movement. She ranks right up there with the top two or three pitchers we’ve seen.”

Roupp’s lined single to center with one out in the fourth inning marked OHS’ last baserunner.

“We’ll be ready next year,” Baker said of a squad that will graduate Getman and Michaela Mancini. “I’m very proud (of our season). We made school history today.”

Windsor will play a state quarterfinal Friday against the Section Three Class B champion at Union-Endicott.

ONEONTA - Anne, as she wished to be called, was born on July 24, 1925, to Harry L. and Leona Fisher in Oneonta. Anne passed on Oct. 19, 2021, at the Bassett Hospital after a short stay in a convalescent home. She is survived by her sister, Leda Eaton of Pine Hurst North Carolina; three sons,…