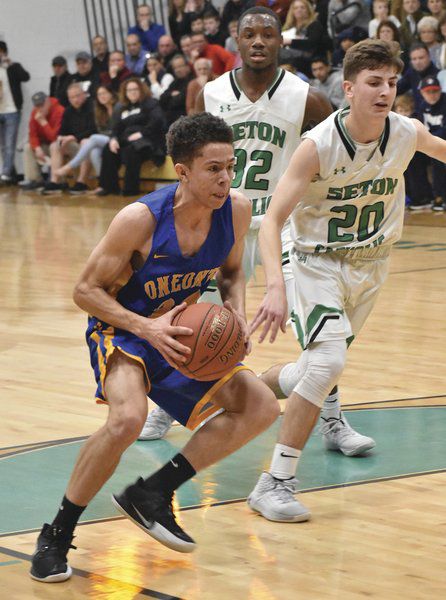 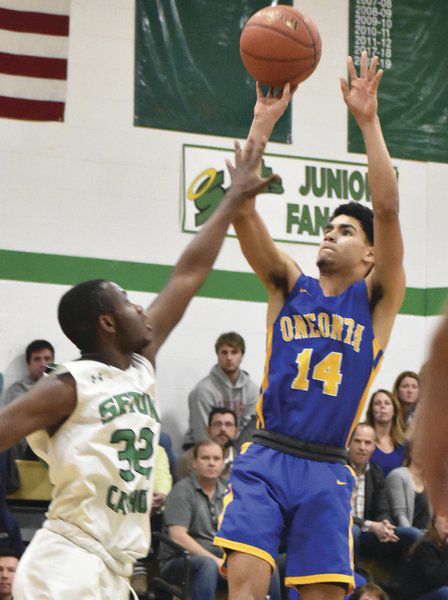 JARED BOMBA | The Daily Star Oneonta’s Graham Wooden takes a shot over the defense of Seton Catholic’s Marcus Dyes during the third quarter of Tuesday’s Class B section semifinal at Seton Catholic.

JARED BOMBA | The Daily Star Oneonta’s Graham Wooden takes a shot over the defense of Seton Catholic’s Marcus Dyes during the third quarter of Tuesday’s Class B section semifinal at Seton Catholic.

BINGHAMTON — Missed foul shots and a pair of late turnovers proved to be Oneonta’s undoing as the fourth-seeded Yellowjackets fell to host and top seed Seton Catholic, 74-73, Tuesday, March 3, in the Section IV Class B boys basketball semifinals.

Khi Atchinson scored two points on an offensive rebound to give OHS a 73-68 lead with 43.9 seconds remaining, but the final six points went to Seton as the Saints pulled off a late comeback to earn a third win over Oneonta this season and advance to the section final.

“Right now, it’s upsetting. Seeing the seniors, my best friends, they’re upset because they might never play basketball again,” Oneonta senior standout Graham Wooden said. “We thought the third time was a charm but I guess not. Hopefully Seton can move forward and get the job done.”

Brett Rumpel scored two of his game-high 42 points just seconds after Atchinson’s deuce to make the deficit three, and the Yellowjackets had a pair of chances to again extend the lead, but twice missed the front halves of one-and-one opportunities at the foul line.

The drama continued as a wayward inbound pass went out of bounds with 2.5 seconds remaining. Possession remained with Seton, drawing the ire of the Oneonta crowd, and the following inbound pass saw Rumpel fouled with less than two seconds left.

The Seton star missed the first of two shots and Wooden, who did not play the final 10 minutes because of an injury, had a heave from about 70 feet hit the front rim at the buzzer.

“This one is frustrating, it’s disappointing. But they left it out there,” Oneonta coach Jerry Mackey said. “As a coach and teacher that’s what you want.

“We will kick ourselves about some foul shots and about some decisions with the ball late, and defensively we did what we wanted to a point but we didn’t wall up the way we wanted,” he continued. “But that’s high school basketball. It happens at college, happens at the pros, that’s why there are coaches.”

The late collapse came after a monumental effort from Wooden, and in his absence late, a host of Yellowjackets.

The Saints took a 35-33 lead into halftime after a first half that saw neither team lead by more than six. OHS took the lead early in the third on a 3-pointer from Alex Osterhoudt, only for Seton to retake a 41-38 advantage.

Wooden responded with six straight points, hitting a pair of tough runners in the lane before knocking down a long, step-back two-pointer from the left corner for a 44-41 OHS edge.

Rumpel cut the lead back to one before a set play produced an open 3-pointer for Wooden and made the deficit four midway through the third.

“I thought our guys did a good job of getting open in certain spots and in other times we just let him go to work,” Mackey said of Wooden. “Especially with the array of looks. It wasn’t like he got open three times at the top of the key and made a couple stationary 3s. He was setting them up, and step-backs and finishing at the rim and and-ones and foul shots and in-rhythm 3s and walking into jumpers.”

Rumpel and Wooden continued to joust as the Saints junior made the gap two, but Wooden got two more with a slicing drive to the basket for a 51-47 lead. The effort cost him, however, as his return to the floor from the layup saw him limp back down the floor.

Rumpel scored on a drive past the gimpy Wooden, who exited with 2:15 left in the third. He had 13 of his 27 total points in the frame.

Wooden had carried an injury to the cartilage in his left knee for much of the season, and missed three games late in the year. He elected to put off surgery until after the season, and will go under the knife later this month.

“I felt it going into halftime. I just came out in the third and I had to give it my all. If it flared up again, it is what it is but I wasn’t going down without a fight,” Wooden said. “We definitely left it all out there. Obviously it was our last game tonight but we had hopes of moving on so I wanted to give it all I got and hopefully bring something back to this community.”

Seton surged in the absence of Wooden, tying it at 52, but Osterhoudt, a senior, had five points late in the quarter and Khysani Atkinson scored a layup in traffic at the buzzer for a 58-54 Oneonta lead entering the fourth.

“I’ve always played that way. It’s been hard for me sometimes with the varsity team but when I have to step up I know I have to step up,” Osterhoudt said. “I just shot my shot, and it was going in. I was ready.”

Different Yellowjackets continued to step up in the fourth as Zyeir Lawrence scored six straight for OHS, including a dunk on a dish from Atkinson. Atchinson hit a triple and Osterhoudt connected from long range in transition to make the lead seven with just more than two minutes remaining.

Still, four points from Rumpel made the deficit three before Atchinson scored ahead of the late scramble.

Wooden had 11 field goals, three of them 3-pointers, and went 2-for-4 from the line to lead Oneonta with 27 points in less than three quarters. Lawrence totaled 18 points on eight field goals and a pair of foul shots, and Osterhoudt hit three triples to collect 16 points on five baskets and a 3-for-5 effort at the foul line.

Rumpel had 15 field goals and went 12-for-16 from the foul line for his 42 points. Dyes hit one 3-pointer to total 17 points on six baskets and a 4-for-4 effort at the line. Michael Bucko hit three 3-pointers to score 10 points as the only other Seton player with more than three points.

For the Yellowjackets, it was a frustrating season filled with injury and illness. Senior Teddy McGraw had elbow surgery in the spring and missed the entire campaign, while Wooden's knee trouble and a spell of sickness on the team kept the squad short-handed on and off for most of the season's latter half.

OHS found itself depleted again Tuesday, with Wooden missing the final 10 minutes, sophomore starter Carter Mackey sitting after taking a blow to the face and Lawrence facing foul trouble. Junior Matt Shultz, who has missed recent games with an injury, was forced to make an early return late in the game.

"The guys have been great all year long about next guy up, do your job, don't feel sorry for yourself, just keep working the system and play your game," Mackey said. "We've been dealing with a curveball ever since we got the news in the spring that Teddy was going to be out with Tommy John surgery."

"Not to diminish any team anywhere, but if Teddy is healthy and Graham is healthy this particular year, in my estimation, Class B is a done deal in Section IV and we are trying to figure out how far we navigate in the state," he continued.

The dramatic exit brought out emotion for players as they exited the locker room after the game. Wooden, who has Division II offers and heavy interest from Division III schools, was nonetheless tearful at the end of his Oneonta career.

"We will have to sit at home and have to accept what happened and move forward," Wooden said. "Hopefully we go to good colleges and have success there, whatever I do and the other five (seniors) do. Then hopefully go from there and have great careers.

"It sucks, all the memories we have, and we won't play high school basketball together again, but there's more to life than basketball," he continued. "It's hard right now, but we'll realize that coming down the road now."

“We always fight, and it was really fun,” Osterhoudt said. “It sucks to end this way, I wish we could have kept going. It is what it is.”

"It's a fun group. From where they were to where they are, I'm proud of them all," Mackey said. "They will be good, upstanding citizens and are testaments to the community and we are proud to have them represent us.