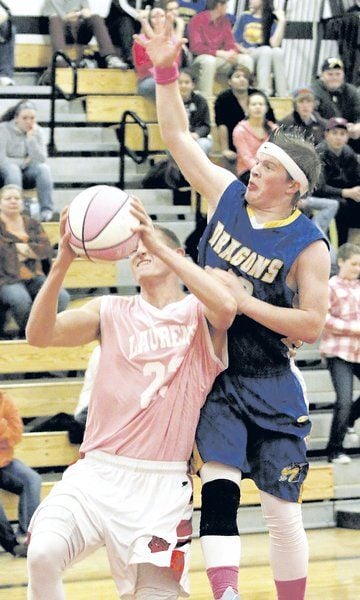 BRIAN C. HOREYSchenevus’ AC Cline tries to block Jared Conklin of Laurens during the second quarter of Saturday’s Coaches vs. Cancer game at Laurens. Conklin, who drew a foul on the play, scored 13 points to help Laurens to a 61-37 victory over its Tri-Valley League rival. 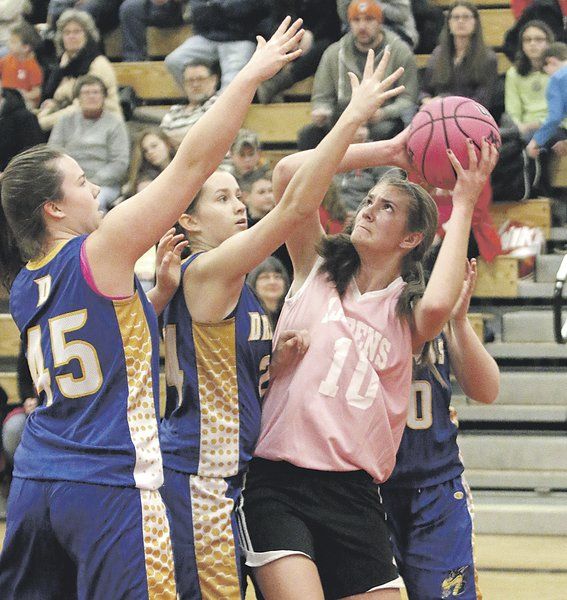 BRIAN C. HOREYLindsey Laing of Laurens looks to shoot over Schenevus’ Dani Teft (45) and Megan Walke during the fourth quarter of Saturday’s Coaches vs. Cancer game at Laurens. Laing finished with 14 points to lead the Leopards to a 46-38 victory in overtime.

BRIAN C. HOREYSchenevus’ AC Cline tries to block Jared Conklin of Laurens during the second quarter of Saturday’s Coaches vs. Cancer game at Laurens. Conklin, who drew a foul on the play, scored 13 points to help Laurens to a 61-37 victory over its Tri-Valley League rival.

BRIAN C. HOREYLindsey Laing of Laurens looks to shoot over Schenevus’ Dani Teft (45) and Megan Walke during the fourth quarter of Saturday’s Coaches vs. Cancer game at Laurens. Laing finished with 14 points to lead the Leopards to a 46-38 victory in overtime.

OHS (6-4) led, 55-54, before fouling Mullins on a drive. Mullins was 3-for-9 from the line until making his last two. He finished with 17 points, one fewer than teammate Jake Hertzog.

On Oneonta’s final possession, CV had two fouls to give before going into the penalty. The Warriors fouled on the Yellowjackets’ first inbounds play. The second time, OHS inbounded to Albert Odero. OHS coach Jerry Mackey said CV made it clear it intended to foul again to try to drain a few more seconds off the clock, but this time a Warriors defender hit the ball, which deflected off of Odero’s leg and out of bounds to give the ball back to CV.

Odero scored a game-high 23 points — 14 coming in the second half — for the Yellowjackets, who made 10 three-pointers and 11 two-pointers. Skylar Thompson (12 points) and George Foti (nine points) made three threes apiece, Daniel Njoku hit two threes, and Odero and Josh Davi each made one. Eight of the Yellowjackets’ three-pointers came after halftime.

“We adjusted in the second half and put Albert in the post (against CV’s zone),” Mackey said. “Everyone was cheating to Albert and they were a half-step slow getting to shooters. We got so many good looks, they switched from the 2-3 zone they normally play to a 3-2. We did a much better job in the second half. I’m very pleased overall with a number of things we did.”

Of Oneonta’s 11 two-point field goals, Odero had nine of them. He also grabbed 13 rebounds.

Caleb Hertzog hit three three-pointers in the second quarter, when the Warriors outscored OHS, 20-5, to take a 29-18 lead into halftime. CV scored the final 11 points of the first half.

The Yellowjackets then outscored CV, 21-14, in the third quarter to narrow their deficit to 43-39.

CV outscored OHS, 12-3, from the free throw line and went to the line 20 more times than the Yellowjackets.

“They put pressure on our defense with Mullins and (Jake) Hertzog,” Mackey said. “Those two had 18 of their 24 free throws. It’s a tough matchup for us. They have guys who have the ability to put the ball on the floor and get to the basket.

“They’re a good opponent,” he continued. “It seems whenever we play them, it’s always a one- or two-possession game. They’re a good team and someone we may see again in sectionals. I have a lot of respect for what (CV coach) Bob Zanot does down there.”

Jared Conklin contributed 13 points and seven rebounds for Laurens, which hosts Milford on Wednesday. Both teams are 9-1 overall and unbeaten in the T-V League. Laurens topped the Wildcats, 51-50, in the championship game of its Pat Grasso Tournament on Dec. 30.

Senior guard Wainright made three threes in the second quarter and three more in the third, helping the Panthers to a 44-43 lead entering the final period.

“He was on fire,” Edmeston coach Darren Belden said. “After being in a little bit of a slump, we’ve been telling him to just keeping shooting.”

The third quarter ended with a buzzer-beating three-pointer from the left wing by Dante Cornnell, who finished with 12 points.

“Things changed,” Belden said of the fourth quarter, when Northville used a 7-6 edge to force overtime. “It looked like nobody wanted to score. We drove to the basket with about 11 seconds left in regulation and missed a layup that was well-contested by two or three Northville players. Then they turned the ball over, then we turned the ball over. Then they missed a wild three.”

Northville opened the scoring in overtime before Kyle King tied it at 52 on a floater in the lane. Neither team made a field goal thereafter, but Northville secured the victory by going 6-for-8 from the free throw line.

“It was something different, but it was good for us,” Belden said of playing Section Two Class D opponent Northville. “The kids gained some confidence and found out that they can play with better teams.”

Danny Reidell had a team-best 23 points and Will Wilson contributed 11 for Northville.

Caleb Stulir contributed 16 points and Kyle Hinman had 14 for the Crimson Knights, who took a 35-29 lead into halftime and pulled away with a 28-16 advantage in the third quarter.

The visiting Yellowjackets failed to score more than seven points in any quarter en route to a Southern Tier Athletic Conference loss.

Madison Miller had a team-high eight points for OHS, which trailed, 23-11, wat halftime.

Teagan Mackey had five points, and Abby Picinich and Caroline McGraw scored four points apiece for OHS (2-6, 2-3), which will host Norwich tonight in a rematch of last season’s Section Four Class B final. In March, the Yellowjackets rallied from a 10-point third-quarter deficit to defeat the Purple Tornado, 51-44, for their seventh straight sectional title.

Lindsey Laing had team-bests of 14 points and nine rebounds to lead host Laurens to a Tri-Valley League overtime defeat of Schenevus in a Coaches vs. Cancer game Saturday.

Laurens’ Courtney Sherry made 1 of 2 free throws with 28 seconds left in regulation to tie the score at 36.

Schenevus then dribbled the ball across mid-court and called a timeout.

“We can wind down the clock and either win it or go to overtime,” Schenevus coach Tim Walke said of the strategy discussed during the timeout.

The Dragons’ Alyssa Turner missed a five-footer in the waning seconds, giving Laurens a chance to win it. Sherry posted up but couldn’t hang on to an entry pass as the buzzer sounded.

“She got a little more playing time,” Laurens coach Dean Marble said of Soucia. “She makes us quicker.”

Claire Fraser and Sherry grabbed nine rebounds apiece for the Leopards, who visit Milford on Tuesday.

Turner finished with a game-high 16 points — including a 10-for-10 effort at the foul line — and a team-best 10 rebounds for the Dragons, who squandered a 21-13 halftime lead.

Margaretville’s Kristena Westerfeld hit a key three-pointer from the top of the key after host Stamford had pulled to three points in the fourth quarter to help the Blue Devils to a Delaware League victory.

The Indians trailed by 10 points entering the fourth quarter, but Haley Steenland scored eight of her 16 points in the final period to help Stamford narrow its deficit.

Jessica Worzel scored a game-high 20 points and Megan Hunter had 18 as host Hancock won Friday in the Midstate Athletic Conference.

OHS and SDU will compete next in the Quinney Memorial Invitational at 9 a.m. this Saturday at Cornell. The invitational is named in honor of former longtime Sidney coach Doug Quinney, who died last year.

Sidney’s Dylan Gifford started a four-match run of local championships with a 5-0 decision over Nate Long of Marcellus at 160 pounds. Teammate Nicholas Jump followed with a pin of Saranac’s Colby Staley in 3:08 for the 170-pound title.

Four other local wrestlers reached the championship round. Walton’s Caleb Robinson and Dakota Coffey lost by decision at 99 and 145, respectively. Delhi’s Trey Mostert fell, 6-5, in the 152-pound final, and Alex Avolio of UV lost, 15-9, in the 220-pound championship match.

Austin Scheer won the 160-pound championship to help Oneonta High to a third-place finish in the 16-team Schenectady Invitational on Saturday.

Scheer made short work of his final opponent, pinning Michael Norwood of the host school in 1:04. Scheer trailed, 2-1, before catching Norwood in a headlock en route to a 4-0 tournament run.

The Yellowjackets, who scored 137 points, got runner-up finishes from Nick Dower (99 pounds), Antonio Pentaris (126) and Sam Sherrill (152), who each lost their championship matches via pinfall to finish 2-1.

Jimmy Verrelli (113) and Mitchell Spaziani (120) each went 3-1 after winning third-place matches for OHS, who visit Windsor on Tuesday for a Southern Tier Athletic Conference dual meet.